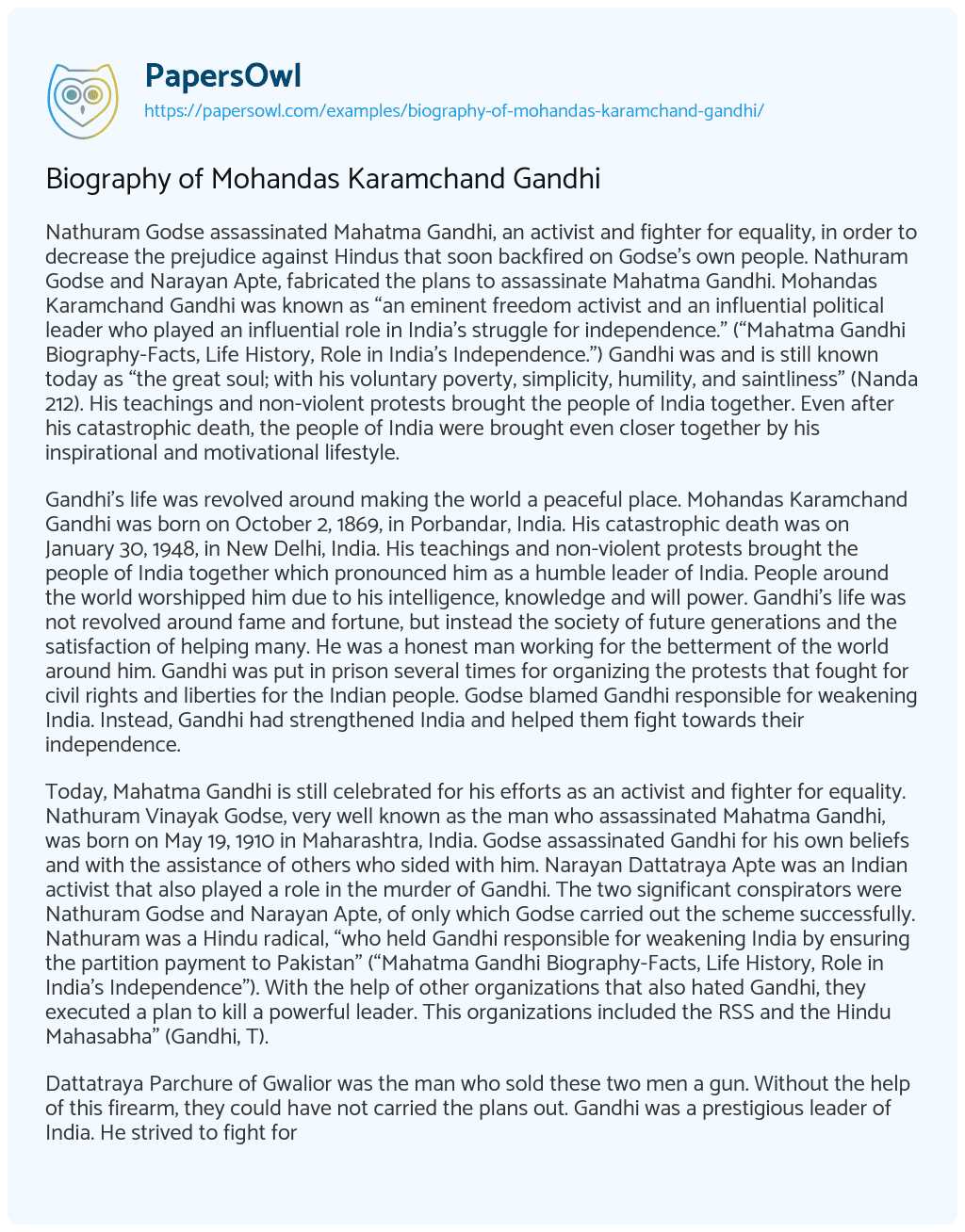 Nathuram Godse assassinated Mahatma Gandhi, an activist and fighter for equality, in order to decrease the prejudice against Hindus that soon backfired on Godse’s own people. Nathuram Godse and Narayan Apte, fabricated the plans to assassinate Mahatma Gandhi. Mohandas Karamchand Gandhi was known as “an eminent freedom activist and an influential political leader who played an influential role in India’s struggle for independence.” (“Mahatma Gandhi Biography-Facts, Life History, Role in India’s Independence.”) Gandhi was and is still known today as “the great soul; with his voluntary poverty, simplicity, humility, and saintliness” (Nanda 212). His teachings and non-violent protests brought the people of India together. Even after his catastrophic death, the people of India were brought even closer together by his inspirational and motivational lifestyle.

Gandhi’s life was revolved around making the world a peaceful place. Mohandas Karamchand Gandhi was born on October 2, 1869, in Porbandar, India. His catastrophic death was on January 30, 1948, in New Delhi, India. His teachings and non-violent protests brought the people of India together which pronounced him as a humble leader of India. People around the world worshipped him due to his intelligence, knowledge and will power. Gandhi’s life was not revolved around fame and fortune, but instead the society of future generations and the satisfaction of helping many. He was a honest man working for the betterment of the world around him. Gandhi was put in prison several times for organizing the protests that fought for civil rights and liberties for the Indian people. Godse blamed Gandhi responsible for weakening India. Instead, Gandhi had strengthened India and helped them fight towards their independence.

Today, Mahatma Gandhi is still celebrated for his efforts as an activist and fighter for equality. Nathuram Vinayak Godse, very well known as the man who assassinated Mahatma Gandhi, was born on May 19, 1910 in Maharashtra, India. Godse assassinated Gandhi for his own beliefs and with the assistance of others who sided with him. Narayan Dattatraya Apte was an Indian activist that also played a role in the murder of Gandhi. The two significant conspirators were Nathuram Godse and Narayan Apte, of only which Godse carried out the scheme successfully. Nathuram was a Hindu radical, “who held Gandhi responsible for weakening India by ensuring the partition payment to Pakistan” (“Mahatma Gandhi Biography-Facts, Life History, Role in India’s Independence”). With the help of other organizations that also hated Gandhi, they executed a plan to kill a powerful leader. This organizations included the RSS and the Hindu Mahasabha” (Gandhi, T).

Dattatraya Parchure of Gwalior was the man who sold these two men a gun. Without the help of this firearm, they could have not carried the plans out. Gandhi was a prestigious leader of India. He strived to fight for rights, freedom for the oppressed and against racial discrimination. In his many accomplishments, one of Gandhi’s most successful protests was called the Salt March. Britain put a salt tax on the people of India. To make a point, Gandhi decided to walk 241 miles to the sea in Dandi to make his own salt. Along with him, thousands of Indians joined him in his journey.

Gandhi devoted his life to one paramount problem: how to perfect and to spread the idea of nonviolence (Nanda 521). In South Africa, he spent most of his time exploring yet continuing his fight against racial discrimination. (Lal 283) In his numerous journeys around the world, Gandhi wrote journals that filled more than 100 volumes. His writings mostly included letters, short articles, and editorials. These all conveyed the idea of nonviolence. Since birth, he was raised as a Hindu and continued to open his mind to other religions. Godse felt extremely threatened by Gandhi’s religious view.

In an interview conducted by Devdas, a reporter, right before Godse was taken to jail, he justified his rationale. Godse said “the accumulating provocation of thirty–two years, culminating in his last pro–Muslim fast, at last goaded me to the conclusion that the existence of Gandhi should be brought to an end immediately. Gandhi had done very well in South Africa to uphold the rights and well–being of the Indian community there. But when he finally returned to India he developed a subjective mentality under which he alone was to be the final judge of what was right or wrong” (Patel).

Godse also believed that Gandhi was not helping the Hindus like he should be doing. He killed Gandhi for purely political reasons. Godse wanted to show Gandhi that the prejudice against Hindus was inappropriate. He felt neglected and needed to show Gandhi that Hindus would not stop him from planning his death. Days prior the murder of Gandhi, just before the end of his 122 hour fast on January 18th, he had said, “I am not afraid to die and somehow I cannot believe that I will die this time”(Michaels). As a believer in nonviolence, he died in the act of violence towards himself. Before he died, witnesses have said that he spoke to Godse saying, “You are late” (Michaels). He had already predicted his death. The time leading up to the murder on Godse’s end was numbered. Although five attempts failed, Godse and Apte used the failures to succeed on their final attempt. Two days before Gandhi was assassinated, Godse did not have possession of a gun.

On January 28, 1948, Godse and Apte acquired one of the best pistols from Gwalior, which was a Beretta 9 mm semi-automatic. Dattatraya Parchure of Gwalior, the man who sold them the gun was arrested and confessed all that he was aware of. Godse finally murdered Gandhi at the time of his evening prayers. From that time on, the darkness was lingering particularly over the people of India and his followers. Gandhi’s death brought mourning upon people of all nations because the people of India lost such a powerful leader. They were determined to get a last glimpse of their prophet. This was the biggest news that was given to India. As it was said, “Over all India the word spread like wildfire. Minutes after the flash was received in Bombay rioting broke out, with Hindu extremists attacking muslims” (Michaels). People protested for many hours, days and even months. They wept, moaned and wailed continuously. This was a bad day for the people of India. The people of India wanted to see their leader Gandhi for the last time. They tried jumping over gates of the mansion and tried to break in. They could not properly say goodbye to their hero, activist and fighter for equality.

According to Source #4, “All roads to Birla House were jammed. As the night wore on the throng, silent but insistent began to press back the police guard.” (Michaels) For the assassin and his fellow conspirators, the death of the leader did not affect them in anyway possible. They wanted Gandhi gone and that is what happened. As Mahatma Gandhi said long ago, “A man who was completely innocent, offered himself as a sacrifice for the good of others, including his enemies, and became the ransom of the world. It was a perfect act.” Gandhi was this innocent man that gave up his life for the people. This foreshadows his death which proclaimed himself as a martyr.

Gandhi had no discrimination against any particular groups of people. He was a hero and a humble man. He did not want any praise, but the satisfaction of helping others. Gandhi never intended to harm anyone or anything in any way possible. The assassination was not the best course of action at that moment. The assassin was striving to protect what he believed was right for him and his people. At the end, the world lost an essential part of their daily lives and nothing could change that.

Biography of Mohandas Karamchand Gandhi. (2021, May 10). Retrieved from https://papersowl.com/examples/biography-of-mohandas-karamchand-gandhi/