From a Bad to Better Country 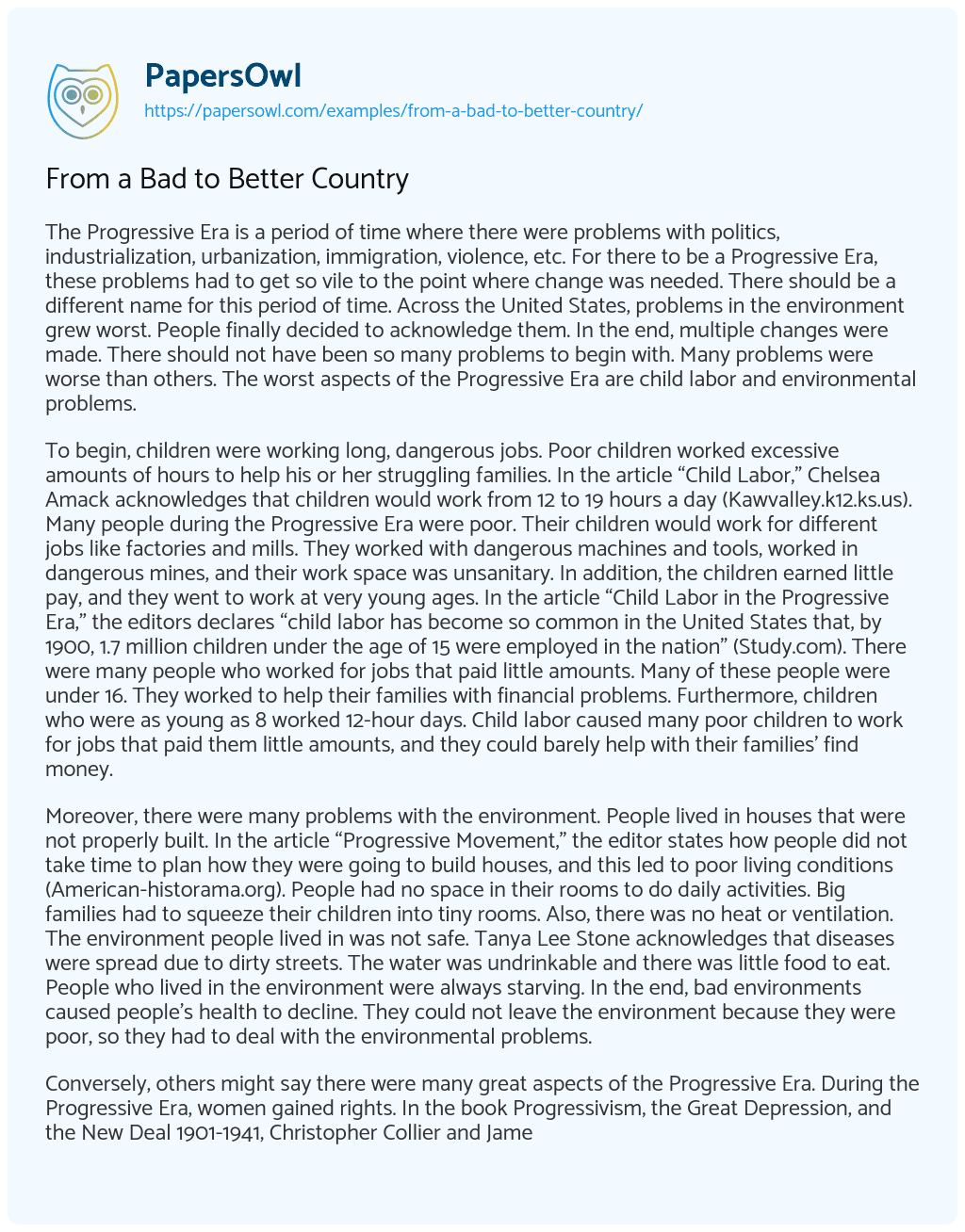 The Progressive Era is a period of time where there were problems with politics, industrialization, urbanization, immigration, violence, etc. For there to be a Progressive Era, these problems had to get so vile to the point where change was needed. There should be a different name for this period of time. Across the United States, problems in the environment grew worst. People finally decided to acknowledge them. In the end, multiple changes were made. There should not have been so many problems to begin with. Many problems were worse than others. The worst aspects of the Progressive Era are child labor and environmental problems.

To begin, children were working long, dangerous jobs. Poor children worked excessive amounts of hours to help his or her struggling families. In the article “Child Labor,” Chelsea Amack acknowledges that children would work from 12 to 19 hours a day (Kawvalley.k12.ks.us). Many people during the Progressive Era were poor. Their children would work for different jobs like factories and mills. They worked with dangerous machines and tools, worked in dangerous mines, and their work space was unsanitary. In addition, the children earned little pay, and they went to work at very young ages. In the article “Child Labor in the Progressive Era,” the editors declares “child labor has become so common in the United States that, by 1900, 1.7 million children under the age of 15 were employed in the nation” (Study.com). There were many people who worked for jobs that paid little amounts. Many of these people were under 16. They worked to help their families with financial problems. Furthermore, children who were as young as 8 worked 12-hour days. Child labor caused many poor children to work for jobs that paid them little amounts, and they could barely help with their families’ find money.

Moreover, there were many problems with the environment. People lived in houses that were not properly built. In the article “Progressive Movement,” the editor states how people did not take time to plan how they were going to build houses, and this led to poor living conditions (American-historama.org). People had no space in their rooms to do daily activities. Big families had to squeeze their children into tiny rooms. Also, there was no heat or ventilation. The environment people lived in was not safe. Tanya Lee Stone acknowledges that diseases were spread due to dirty streets. The water was undrinkable and there was little food to eat. People who lived in the environment were always starving. In the end, bad environments caused people’s health to decline. They could not leave the environment because they were poor, so they had to deal with the environmental problems.

Conversely, others might say there were many great aspects of the Progressive Era. During the Progressive Era, women gained rights. In the book Progressivism, the Great Depression, and the New Deal 1901-1941, Christopher Collier and James Lincoln Collier explain how women could vote in fifteen states, and thirteen states allowed women to vote in presidential elections (37-38). Women performed many protests and speeches about how they were not allowed certain rights. The Nineteenth Amendment was passed, allowing women to vote. However, in order to gain rights, women had to perform many protests around the United States for ten years. In the article “The Progressive Era,” C.A Paul states “Women, too, had prominent roles during this time. Many groups organized to push for gender equality, prison reform, the creation of public kindergartens,day care for children of working mothers, and facilities to support children in need” (Socialwelfare.library.vcu.edu). The amount of women tired of woman suffrage increased dramatically. Although there were a lot of great changes made during the Progressive Era, many people had to suffer until there was a change.

From a Bad to Better Country. (2021, May 10). Retrieved from https://papersowl.com/examples/from-a-bad-to-better-country/

The Immense Pain Caused by the Progressive Era

The Regressive Era for Everyone Else