Their Eyes were Watching God Essay about Power 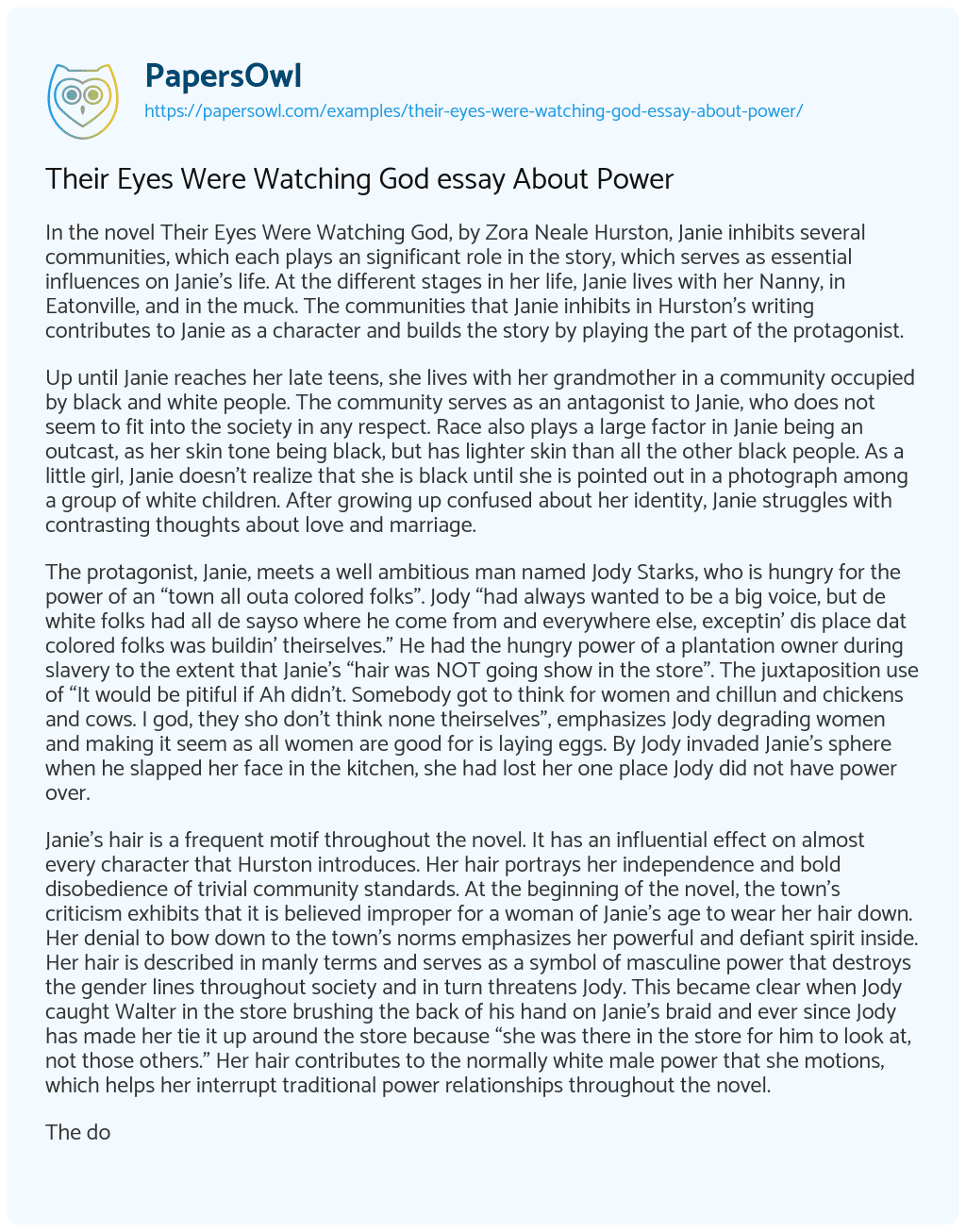 In the novel Their Eyes Were Watching God, by Zora Neale Hurston, Janie inhibits several communities, which each plays an significant role in the story, which serves as essential influences on Janie’s life. At the different stages in her life, Janie lives with her Nanny, in Eatonville, and in the muck. The communities that Janie inhibits in Hurston’s writing contributes to Janie as a character and builds the story by playing the part of the protagonist.

Up until Janie reaches her late teens, she lives with her grandmother in a community occupied by black and white people. The community serves as an antagonist to Janie, who does not seem to fit into the society in any respect. Race also plays a large factor in Janie being an outcast, as her skin tone being black, but has lighter skin than all the other black people. As a little girl, Janie doesn’t realize that she is black until she is pointed out in a photograph among a group of white children. After growing up confused about her identity, Janie struggles with contrasting thoughts about love and marriage.

The protagonist, Janie, meets a well ambitious man named Jody Starks, who is hungry for the power of an “town all outa colored folks”. Jody “had always wanted to be a big voice, but de white folks had all de sayso where he come from and everywhere else, exceptin’ dis place dat colored folks was buildin’ theirselves.” He had the hungry power of a plantation owner during slavery to the extent that Janie’s “hair was NOT going show in the store”. The juxtaposition use of “It would be pitiful if Ah didn’t. Somebody got to think for women and chillun and chickens and cows. I god, they sho don’t think none theirselves”, emphasizes Jody degrading women and making it seem as all women are good for is laying eggs. By Jody invaded Janie’s sphere when he slapped her face in the kitchen, she had lost her one place Jody did not have power over.

Janie’s hair is a frequent motif throughout the novel. It has an influential effect on almost every character that Hurston introduces. Her hair portrays her independence and bold disobedience of trivial community standards. At the beginning of the novel, the town’s criticism exhibits that it is believed improper for a woman of Janie’s age to wear her hair down. Her denial to bow down to the town’s norms emphasizes her powerful and defiant spirit inside. Her hair is described in manly terms and serves as a symbol of masculine power that destroys the gender lines throughout society and in turn threatens Jody. This became clear when Jody caught Walter in the store brushing the back of his hand on Janie’s braid and ever since Jody has made her tie it up around the store because “she was there in the store for him to look at, not those others.” Her hair contributes to the normally white male power that she motions, which helps her interrupt traditional power relationships throughout the novel.

The dominant impression that the hair gives is that of possession. Janie’s hair fulfills an illustration of sexual relationships and attraction. The various descriptions of Janie’s hair exemplify her relationships with each of her husbands. Jody Starks, who is overly jealous and possessive, which he cannot bear the thought of other men enjoying the sight of her long hair. Janie’s unwillingness demonstrates her desire to be loved and accepted by the community as she is in all aspects of her personality. Janie’s hair makes an appearance both in the opening scene and in the conclusion of the novel. It’s this characteristic that helps the porch sitters to recognize her as she returns to the city. After Janie reaches the end of her story and the end of the novel she goes upstairs to bed. ‘She closed in and sat down. Combing road-dust out of her hair. Thinking…’ (p 192)

Throughout the novel, Their Eyes Were Watching God, Janie’s hair is the recurring motif and symbol that shapes the relationships she encounters with the multiple men. The communities she shows her presence in affects the way they see Janie due to her hair being up or down. The motif hair affects how the communities react around her and influence everyone in them

Their Eyes Were Watching God essay About Power. (2021, Apr 20). Retrieved from https://papersowl.com/examples/their-eyes-were-watching-god-essay-about-power/

Their Eyes were Watching God Analysis