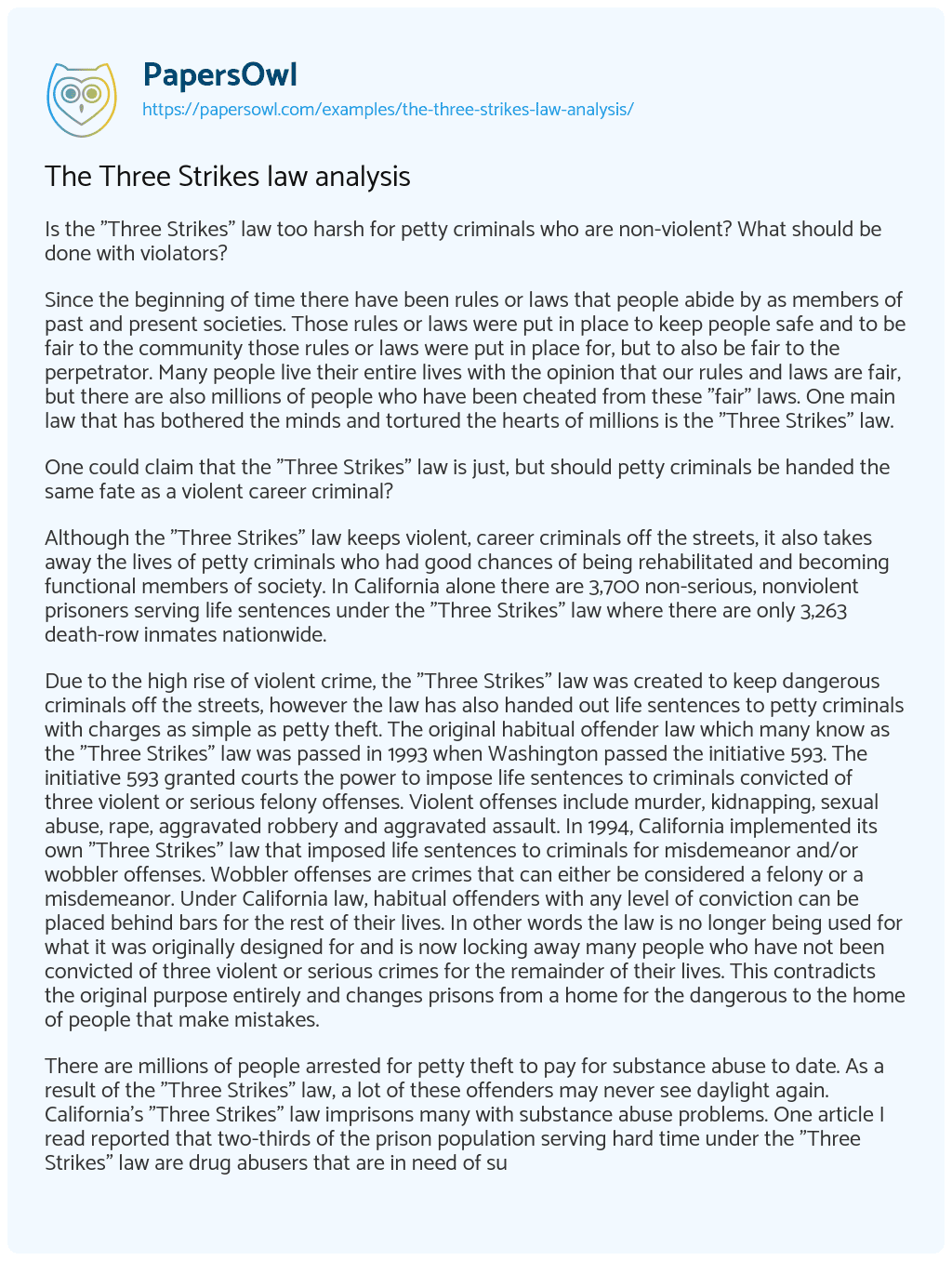 Is the “Three Strikes” law too harsh for petty criminals who are non-violent? What should be done with violators?

Since the beginning of time there have been rules or laws that people abide by as members of past and present societies. Those rules or laws were put in place to keep people safe and to be fair to the community those rules or laws were put in place for, but to also be fair to the perpetrator. Many people live their entire lives with the opinion that our rules and laws are fair, but there are also millions of people who have been cheated from these “fair” laws. One main law that has bothered the minds and tortured the hearts of millions is the “Three Strikes” law.

One could claim that the “Three Strikes” law is just, but should petty criminals be handed the same fate as a violent career criminal?

Although the “Three Strikes” law keeps violent, career criminals off the streets, it also takes away the lives of petty criminals who had good chances of being rehabilitated and becoming functional members of society. In California alone there are 3,700 non-serious, nonviolent prisoners serving life sentences under the “Three Strikes” law where there are only 3,263 death-row inmates nationwide.

Due to the high rise of violent crime, the “Three Strikes” law was created to keep dangerous criminals off the streets, however the law has also handed out life sentences to petty criminals with charges as simple as petty theft. The original habitual offender law which many know as the “Three Strikes” law was passed in 1993 when Washington passed the initiative 593. The initiative 593 granted courts the power to impose life sentences to criminals convicted of three violent or serious felony offenses. Violent offenses include murder, kidnapping, sexual abuse, rape, aggravated robbery and aggravated assault. In 1994, California implemented its own “Three Strikes” law that imposed life sentences to criminals for misdemeanor and/or wobbler offenses. Wobbler offenses are crimes that can either be considered a felony or a misdemeanor. Under California law, habitual offenders with any level of conviction can be placed behind bars for the rest of their lives. In other words the law is no longer being used for what it was originally designed for and is now locking away many people who have not been convicted of three violent or serious crimes for the remainder of their lives. This contradicts the original purpose entirely and changes prisons from a home for the dangerous to the home of people that make mistakes.

There are millions of people arrested for petty theft to pay for substance abuse to date. As a result of the “Three Strikes” law, a lot of these offenders may never see daylight again. California’s “Three Strikes” law imprisons many with substance abuse problems. One article I read reported that two-thirds of the prison population serving hard time under the “Three Strikes” law are drug abusers that are in need of substance abuse treatment. Between 1980 to 1997 the zero- tolerance policies that were implemented dramatically changed the number of people incarcerated for nonviolent drug offenses from 50,000 to 400,000. The war on drugs is responsible for about 79 percent of the inmates serving life in Federal Prisons for nonviolent drug crimes. Drug addiction experts have pronounced that drug addiction is actually not a criminal quality people were born with but is a mental illness. Placing addicts with petty crimes in prison for life is not just. It does not save lives, it destroys them.

Some cases are meant to be put in the news because of how serious they are, but in this case the world should be ashamed of passing the “Three Strikes” law and implementing it in this scenario. If this is not unfair, I cannot begin to tell you what fair should have been. In 1994, Jerry Williams of California was playing “truth or dare” with a group of friends who dared him to take a slice of pizza from another group of kids eating at a local outdoor pizza parlor. The pizza parlor owner called the police and Williams was arrested. Williams did not run from the crime and when the police came, he pointed his self out not knowing about the newly mandated law. Williams went to court and was eventually sentenced to 25 years to life under the “Three Strikes” law for stealing pizza. There is no feeling like not knowing what you have done will cost you the rest of your life. What’s even worse is humanity comparing 25 years of someone’s life to a $1.25 slice of pizza.

People are being used as examples, and for that reason, different options should be given to violators depending on level of their crime. In a New York Times article I read about the “Three Strikes” law, where a man named Norman Williams was used as an example. He was also sentenced to life for petty theft. In 1997, Norman Williams was a homeless addict. Norman stole in order to fuel his drug addiction. He was caught and arrested for stealing a floor jack from a tow truck. Norman was sentenced to 25 years for this offense because he had two prior charges which qualified him to be tried under the “Three Strikes” law. If this is justice, than what is injustice?

While many of us that feel the “Three Strikes” law is too harsh, others feel it is not. Some feel that because it still gives criminals more than one shot at redemption it is just. Some people feel that once you get to three strikes, then who’s to say the spree will stop there regardless of the offense. They feel that violators should be punished and whatever is handed to them is well deserved. When the “Three Strikes” law was implemented, statistics that convinced more than half of the world to pass the law strengthened the opinions of the believers.

According to the Bureau of Justice Statistics, 77% of all prisoners are re-arrested within 5 years of their release. With the law in place, it should have made multiple offenders think twice before committing a third crime, which in turn should lower felony arrests and those who do violate those terms will remain in prison once convicted. These statistics alone is more than enough to keep a supporter of the “Three Strikes” law a firm believer and possibly change the minds of non-supporters.

Although that may be true, rules and laws were created to be fair. They were created to keep people safe whether innocent bystander or criminal. Levels of law were created so harsher penalties were given for harsher offenses. No one deserves a life sentence for stealing a slice of pizza or a car jack. Prisons are no longer only used to house people that threaten our well-being but are used to house the sick, the unfortunate and people who make non-life-threatening mistakes. In other words, they house our families and our neighbors.

Within 10 years of California implementing the “Three Strikes” law, research has proven that violent crime had actually increased. In 2001, the Centers on Juvenile and Criminal Justice found that the law was ineffective despite previous findings that supported it. If the law does not deter ex-cons from committing a third crime or truly decreases crime, then how does it keep people safe? The truth is that crime is not going anywhere regardless of what laws we put in place. Working together to help people to be better people should be the goal versus finding a permanent home for people who have problems that the world chooses not to deal with.

In conclusion, laws are broken everyday by all walks of life. Nobody is perfect. I am in agreement that violent and serious offenders should serve life sentences under the “Three Strikes” law, but to sentence a petty criminal to life is too harsh and is inhumane. The “Three Strikes” law also contradicts our Eighth Amendment where it is said that, “bail shall not be required, nor excessive fines imposed, nor cruel and unusual punishments inflicted”. People who have mental illnesses should be in mental hospitals. Nonviolent drug offenders battling drug addiction should be sent a rehabilitation centers where they can get the help they truly need. Nonviolent offenders who made a mistake and still have a chance of being a great asset to our society should have the opportunity to be punished for their mistakes and learn to grow from them. The punishment should fit the crime. 80% of the world’s arrests are misdemeanor offenses. Does 80% of the world not deserve a 4th chance?

Offenses against the Government, Administration