The Society’s Obsession with Materialism in the Fight Club 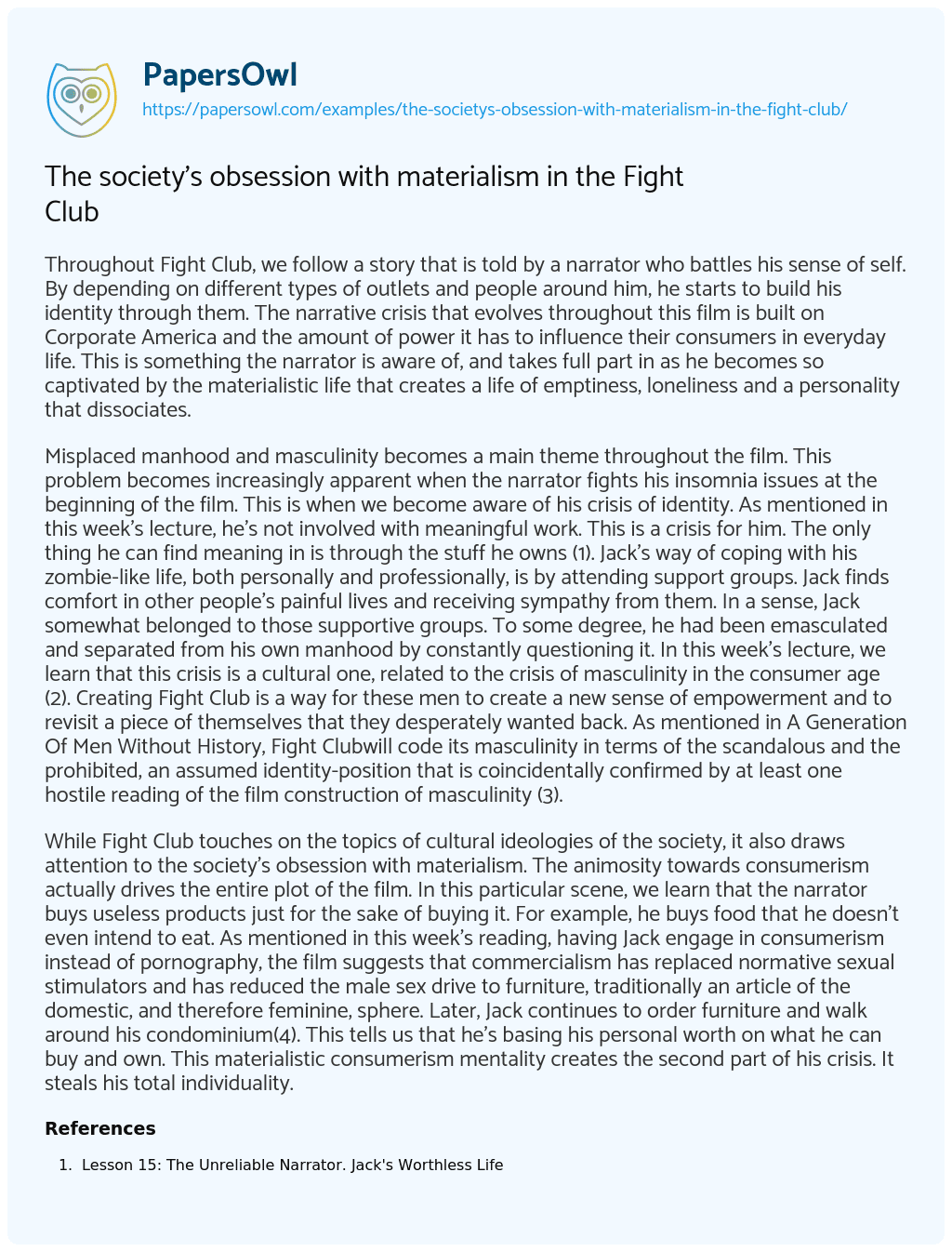 Throughout Fight Club, we follow a story that is told by a narrator who battles his sense of self. By depending on different types of outlets and people around him, he starts to build his identity through them. The narrative crisis that evolves throughout this film is built on Corporate America and the amount of power it has to influence their consumers in everyday life. This is something the narrator is aware of, and takes full part in as he becomes so captivated by the materialistic life that creates a life of emptiness, loneliness and a personality that dissociates.

Misplaced manhood and masculinity becomes a main theme throughout the film. This problem becomes increasingly apparent when the narrator fights his insomnia issues at the beginning of the film. This is when we become aware of his crisis of identity. As mentioned in this week’s lecture, he’s not involved with meaningful work. This is a crisis for him. The only thing he can find meaning in is through the stuff he owns (1). Jack’s way of coping with his zombie-like life, both personally and professionally, is by attending support groups. Jack finds comfort in other people’s painful lives and receiving sympathy from them. In a sense, Jack somewhat belonged to those supportive groups. To some degree, he had been emasculated and separated from his own manhood by constantly questioning it. In this week’s lecture, we learn that this crisis is a cultural one, related to the crisis of masculinity in the consumer age (2). Creating Fight Club is a way for these men to create a new sense of empowerment and to revisit a piece of themselves that they desperately wanted back. As mentioned in A Generation Of Men Without History, Fight Clubwill code its masculinity in terms of the scandalous and the prohibited, an assumed identity-position that is coincidentally confirmed by at least one hostile reading of the film construction of masculinity (3).

While Fight Club touches on the topics of cultural ideologies of the society, it also draws attention to the society’s obsession with materialism. The animosity towards consumerism actually drives the entire plot of the film. In this particular scene, we learn that the narrator buys useless products just for the sake of buying it. For example, he buys food that he doesn’t even intend to eat. As mentioned in this week’s reading, having Jack engage in consumerism instead of pornography, the film suggests that commercialism has replaced normative sexual stimulators and has reduced the male sex drive to furniture, traditionally an article of the domestic, and therefore feminine, sphere. Later, Jack continues to order furniture and walk around his condominium(4). This tells us that he’s basing his personal worth on what he can buy and own. This materialistic consumerism mentality creates the second part of his crisis. It steals his total individuality.

The society's obsession with materialism in the Fight Club. (2019, Dec 18). Retrieved from https://papersowl.com/examples/the-societys-obsession-with-materialism-in-the-fight-club/