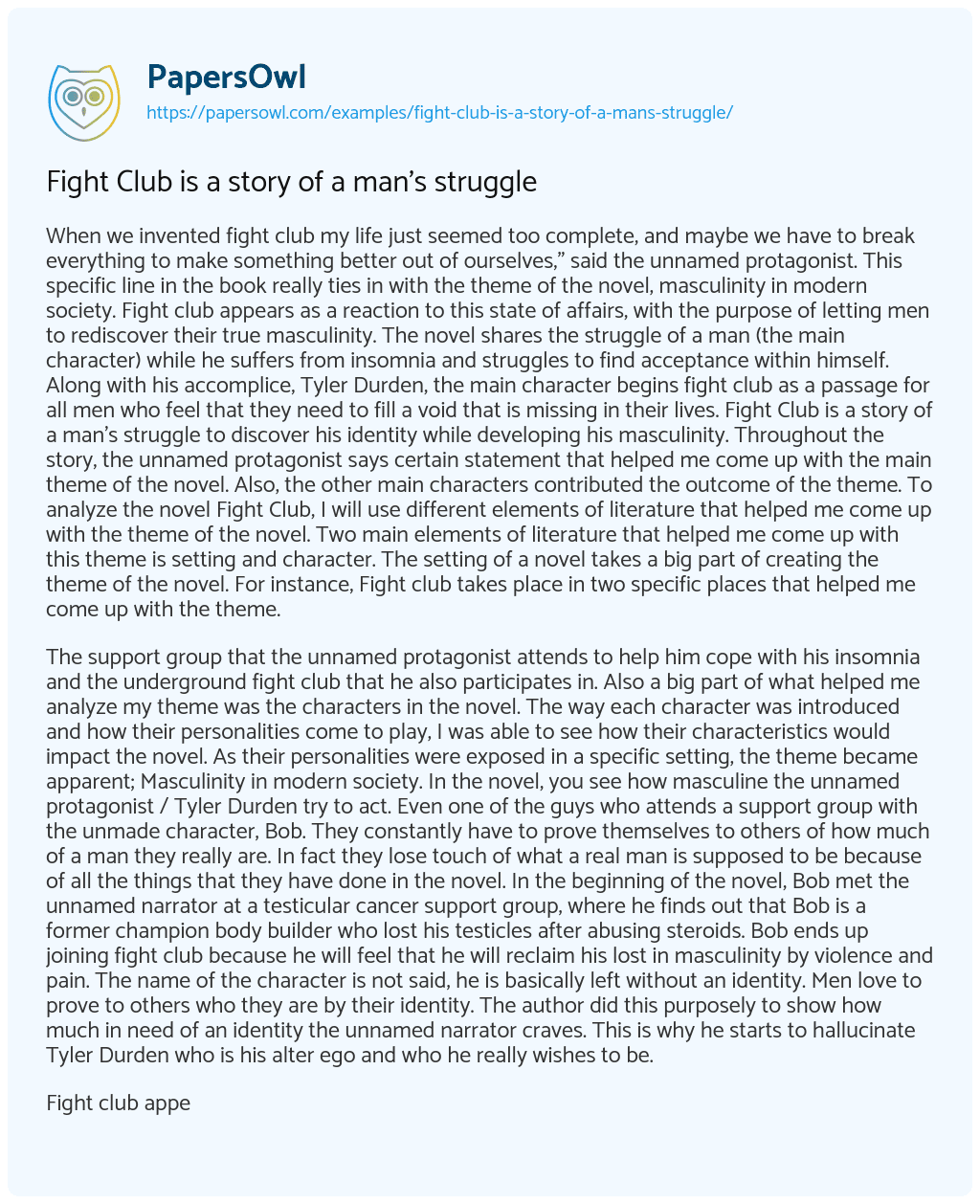 When we invented fight club my life just seemed too complete, and maybe we have to break everything to make something better out of ourselves,” said the unnamed protagonist. This specific line in the book really ties in with the theme of the novel, masculinity in modern society. Fight club appears as a reaction to this state of affairs, with the purpose of letting men to rediscover their true masculinity. The novel shares the struggle of a man (the main character) while he suffers from insomnia and struggles to find acceptance within himself. Along with his accomplice, Tyler Durden, the main character begins fight club as a passage for all men who feel that they need to fill a void that is missing in their lives. Fight Club is a story of a man’s struggle to discover his identity while developing his masculinity. Throughout the story, the unnamed protagonist says certain statement that helped me come up with the main theme of the novel. Also, the other main characters contributed the outcome of the theme. To analyze the novel Fight Club, I will use different elements of literature that helped me come up with the theme of the novel. Two main elements of literature that helped me come up with this theme is setting and character. The setting of a novel takes a big part of creating the theme of the novel. For instance, Fight club takes place in two specific places that helped me come up with the theme.

The support group that the unnamed protagonist attends to help him cope with his insomnia and the underground fight club that he also participates in. Also a big part of what helped me analyze my theme was the characters in the novel. The way each character was introduced and how their personalities come to play, I was able to see how their characteristics would impact the novel. As their personalities were exposed in a specific setting, the theme became apparent; Masculinity in modern society. In the novel, you see how masculine the unnamed protagonist / Tyler Durden try to act. Even one of the guys who attends a support group with the unmade character, Bob. They constantly have to prove themselves to others of how much of a man they really are. In fact they lose touch of what a real man is supposed to be because of all the things that they have done in the novel. In the beginning of the novel, Bob met the unnamed narrator at a testicular cancer support group, where he finds out that Bob is a former champion body builder who lost his testicles after abusing steroids. Bob ends up joining fight club because he will feel that he will reclaim his lost in masculinity by violence and pain. The name of the character is not said, he is basically left without an identity. Men love to prove to others who they are by their identity. The author did this purposely to show how much in need of an identity the unnamed narrator craves. This is why he starts to hallucinate Tyler Durden who is his alter ego and who he really wishes to be.

Fight club appears as a reaction to what society think men really are, with the purpose of allowing men to rediscover their masculinity. The true purpose of fight club is to show what being a real masculine man truly means, being willing to feel pain, and giving pain out to others. For the unnamed narrators alter ego, Tyler Durden masculinity is a physical state. An awareness of what one’s body can do, and a willingness to use one’s body to satisfy its aggressive and violent needs. As such, the fight club’s give’s men the opportunity to release their emotions in a way that is thrilling in a sense of life that the rest of their being completely lacks. Two men fighting and going at it just to make their egos bigger says a lot about masculinity in modern times. Even though the book was written a long time ago it shows how men truly identity themselves in a barbaric manner. “The first rule about fight club is you don’t talk about fight club.” Fight club was introduced as an outlet for men to unleash their anger and to give its members a way to get in touch with what is “real” about themselves. Through pain and suffering, fight club members aim to go beyond the pettiness and flamboyance of their daily lives. The characters in fight club play a big important role into the theme of the novel and so does the setting. With these two elements I was able to come up with the theme and analyze both subjects to show why it is about masculinity in modern society.

Fight Club is a story of a man's struggle. (2019, Jan 28). Retrieved from https://papersowl.com/examples/fight-club-is-a-story-of-a-mans-struggle/