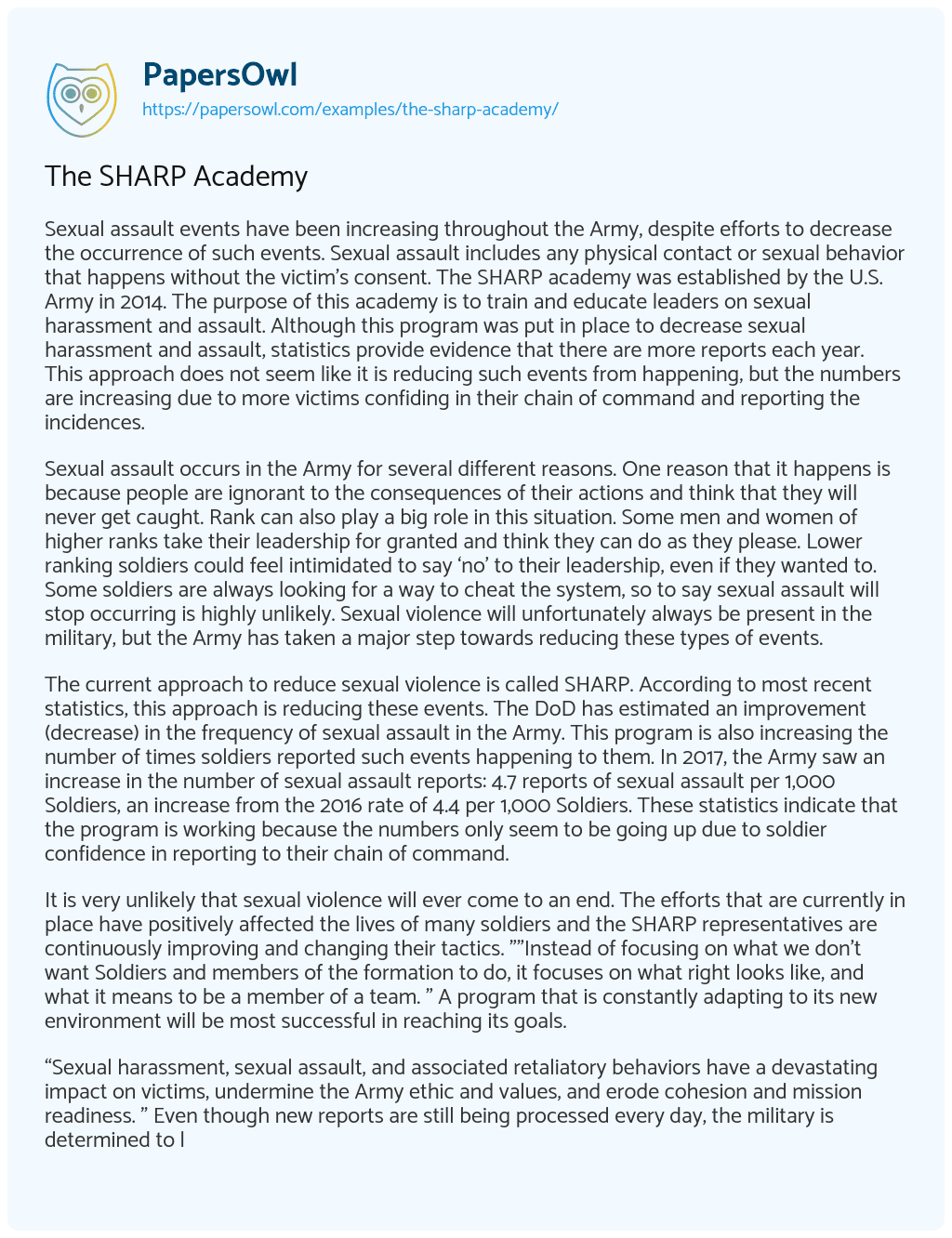 Sexual assault events have been increasing throughout the Army, despite efforts to decrease the occurrence of such events. Sexual assault includes any physical contact or sexual behavior that happens without the victim’s consent. The SHARP academy was established by the U.S. Army in 2014. The purpose of this academy is to train and educate leaders on sexual harassment and assault. Although this program was put in place to decrease sexual harassment and assault, statistics provide evidence that there are more reports each year. This approach does not seem like it is reducing such events from happening, but the numbers are increasing due to more victims confiding in their chain of command and reporting the incidences.

Sexual assault occurs in the Army for several different reasons. One reason that it happens is because people are ignorant to the consequences of their actions and think that they will never get caught. Rank can also play a big role in this situation. Some men and women of higher ranks take their leadership for granted and think they can do as they please. Lower ranking soldiers could feel intimidated to say ‘no’ to their leadership, even if they wanted to. Some soldiers are always looking for a way to cheat the system, so to say sexual assault will stop occurring is highly unlikely. Sexual violence will unfortunately always be present in the military, but the Army has taken a major step towards reducing these types of events.

The current approach to reduce sexual violence is called SHARP. According to most recent statistics, this approach is reducing these events. The DoD has estimated an improvement (decrease) in the frequency of sexual assault in the Army. This program is also increasing the number of times soldiers reported such events happening to them. In 2017, the Army saw an increase in the number of sexual assault reports: 4.7 reports of sexual assault per 1,000 Soldiers, an increase from the 2016 rate of 4.4 per 1,000 Soldiers. These statistics indicate that the program is working because the numbers only seem to be going up due to soldier confidence in reporting to their chain of command.

It is very unlikely that sexual violence will ever come to an end. The efforts that are currently in place have positively affected the lives of many soldiers and the SHARP representatives are continuously improving and changing their tactics. “”Instead of focusing on what we don’t want Soldiers and members of the formation to do, it focuses on what right looks like, and what it means to be a member of a team. ” A program that is constantly adapting to its new environment will be most successful in reaching its goals.

“Sexual harassment, sexual assault, and associated retaliatory behaviors have a devastating impact on victims, undermine the Army ethic and values, and erode cohesion and mission readiness. ” Even though new reports are still being processed every day, the military is determined to look for new methods to continue to lower the number of events of sexual violence. They are also determined to continue to increase the number of people that confide in their leadership. This will be possible by continuing to enforce SHARP in soldiers’ core training.

Is the SHARP Program Effective?

Why does the Number of Sexual Assaults Continue to Increase Throughout the Army?

The Progression of SHARP