Female Empowerment in the Novel “Their Eyes were Watching God” 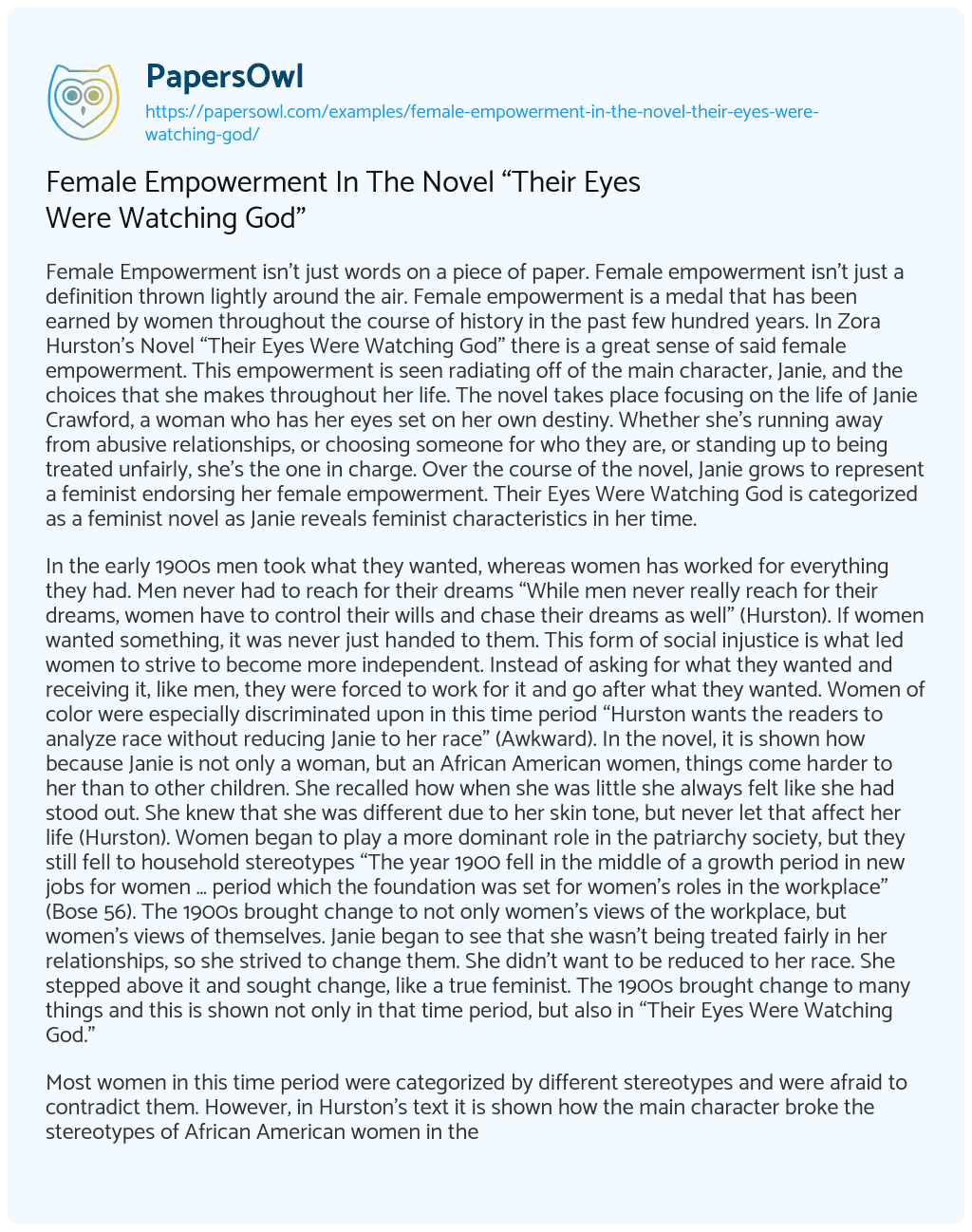 Female Empowerment isn’t just words on a piece of paper. Female empowerment isn’t just a definition thrown lightly around the air. Female empowerment is a medal that has been earned by women throughout the course of history in the past few hundred years. In Zora Hurston’s Novel “Their Eyes Were Watching God” there is a great sense of said female empowerment. This empowerment is seen radiating off of the main character, Janie, and the choices that she makes throughout her life. The novel takes place focusing on the life of Janie Crawford, a woman who has her eyes set on her own destiny. Whether she’s running away from abusive relationships, or choosing someone for who they are, or standing up to being treated unfairly, she’s the one in charge. Over the course of the novel, Janie grows to represent a feminist endorsing her female empowerment. Their Eyes Were Watching God is categorized as a feminist novel as Janie reveals feminist characteristics in her time.

In the early 1900s men took what they wanted, whereas women has worked for everything they had. Men never had to reach for their dreams “While men never really reach for their dreams, women have to control their wills and chase their dreams as well” (Hurston). If women wanted something, it was never just handed to them. This form of social injustice is what led women to strive to become more independent. Instead of asking for what they wanted and receiving it, like men, they were forced to work for it and go after what they wanted. Women of color were especially discriminated upon in this time period “Hurston wants the readers to analyze race without reducing Janie to her race” (Awkward). In the novel, it is shown how because Janie is not only a woman, but an African American women, things come harder to her than to other children. She recalled how when she was little she always felt like she had stood out. She knew that she was different due to her skin tone, but never let that affect her life (Hurston). Women began to play a more dominant role in the patriarchy society, but they still fell to household stereotypes “The year 1900 fell in the middle of a growth period in new jobs for women … period which the foundation was set for women’s roles in the workplace” (Bose 56). The 1900s brought change to not only women’s views of the workplace, but women’s views of themselves. Janie began to see that she wasn’t being treated fairly in her relationships, so she strived to change them. She didn’t want to be reduced to her race. She stepped above it and sought change, like a true feminist. The 1900s brought change to many things and this is shown not only in that time period, but also in “Their Eyes Were Watching God.”

Most women in this time period were categorized by different stereotypes and were afraid to contradict them. However, in Hurston’s text it is shown how the main character broke the stereotypes of African American women in the 1900s and stepped out of them to do what she wanted. Many will argue that Hurston’s novel epitomizes women’s omission from power “And while feminists have been eager to seize upon this text as an expression of female empowerment, I think that it is a novel that represents women’s exclusion from power, particularly oral speech” (Bloom 9). This is correct in the sense that this time period was dominated by the patriarchy of society. However, women’s convoy to power was in a rise in this century. Hurston shows how Janie goes out and speaks her mind regardless of “exclusion from oral speech.” She’s an independent women who seeks her own adventure and when she realizes that life isn’t fair, she steps up to change it. Janie represents a true feminist when she decides to leave her marriage due to seeing unfairness in it. Janie says that he expected her to worship him but that she never will. Logan then breaks down, cursing her and sobbing. Afterward, Janie leaves to meet Jody at a different place so that they can run away together (Hurston). She goes after what she wants, and achieves her goals. When she sees that she isn’t being treated fairly, she changes that. When feminists see that something isn’t right in their life, especially at the hands of a man, they strive to change it.

Feminism wasn’t only an issue in the early 20th century. How Janie reacted to some situations in her life, is still prevalent today. Janie is a true feminist after seeing how she reacted to unfair situations in her life, is relevant today in the lives of women in the 20th-21st century. What many people should know is that women like Janie are not only happy without a man, but better off without one as well “Besides she liked being lonesome for a change. This freedom feeling was fine. These men didn’t represent a thing she wanted to know about . . . She felt like slapping some of them for sitting around grinning at her like a pack of chessy cats, trying to make out that they looked like love” (Hurston). When Janie got out of her abusive, and upsetting relationship with Logan, she saw that it might have been better off that way. She saw that once she took charge of her own destiny, she was happier. Janie was not alone. Like other feminist women, Janie was often put down for her view on things like this. It is shown that in Janie’s second marriage, to Jody Starks, she is an example of a woman who’s put down for being herself. Jody doesn’t allow her to speak to other men, nor speak her mind about certain topics when she wants to. He beats her from time to time, and doesn’t allow her to speak in large crowds (Bloom). Janie is put down before realizing that once again, she has the ability to stand up and leave. A prime example of feminism is when a woman becomes socially and emotionally aware that she is being treated unfairly due to gender differences, Janie saw that she wasn’t being treated fairly and decided to take charge, and leave.

In Zora Hurston’s novel “Their Eyes Were Watching God” the main character, Janie Crawford, develops and reveals her feminist awareness throughout the intensity of her experiences. Women in the 1900s began to see that how they were being treated wasn’t fair. The treatment of women, especially African American women, began to change when women began to change. Janie Crawford saw that she wasn’t treated fairly as a child, and was aware of it, and saw that she wasn’t treated fairly in either of her marriages. She didn’t want to be reduced to the color of her skin, nor her sex. What Janie feels is relevant today and she revealed how her, and women in the 21st century thought alike. Feminism is an issue that affects millions of women around the world. Janie didn’t want to be one of those million. She saw that change needed to be made in her life, so she went after that change. Female empowerment is not just words. Female empowerment is a badge. A badge of honor earned by women throughout the course of the past few hundred years. Janie Crawford showed how she wore that badge of honor with pride.

Female Empowerment In The Novel “Their Eyes Were Watching God”. (2021, Mar 01). Retrieved from https://papersowl.com/examples/female-empowerment-in-the-novel-their-eyes-were-watching-god/

Their Eyes were Watching God