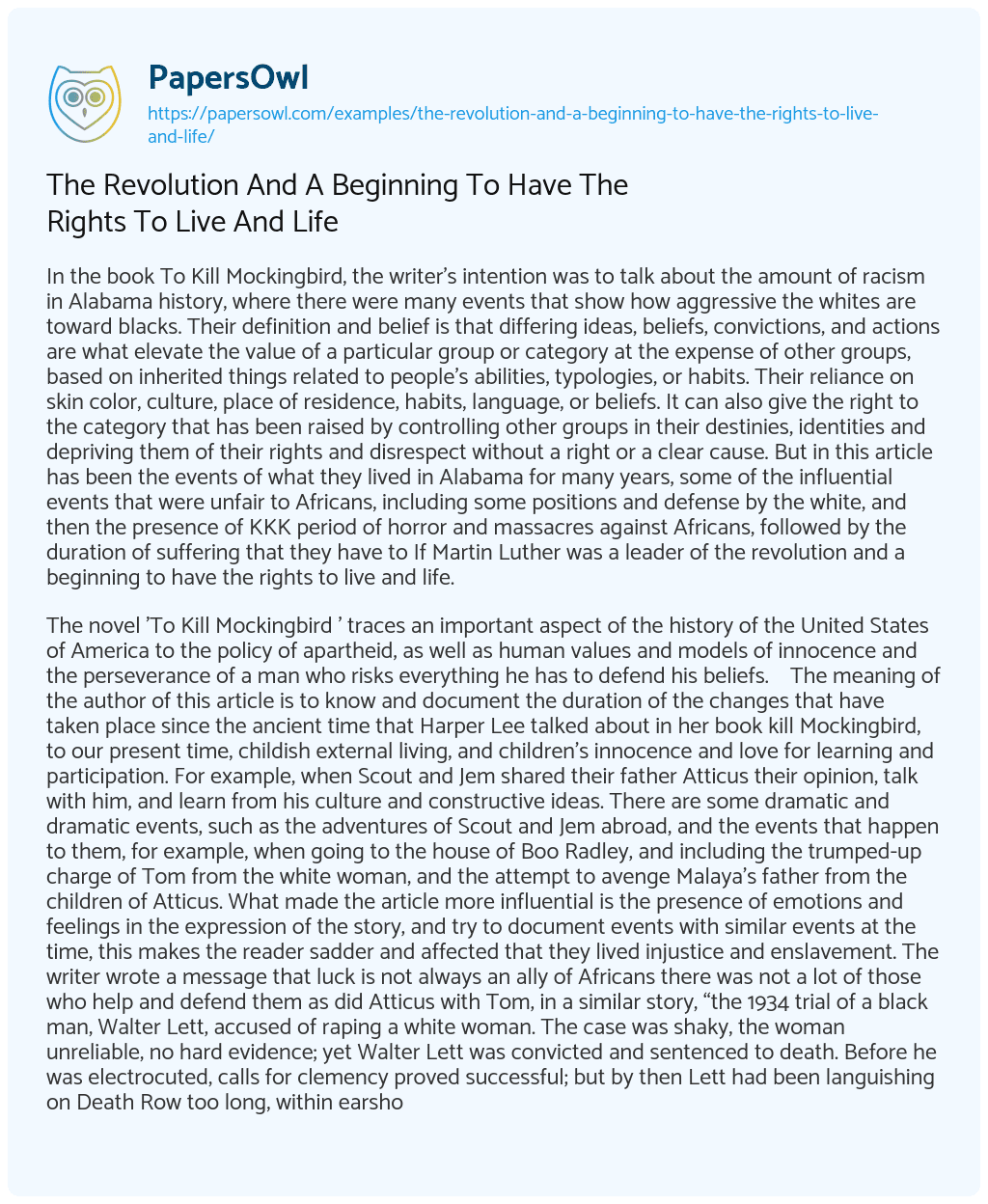 In the book To Kill Mockingbird, the writer’s intention was to talk about the amount of racism in Alabama history, where there were many events that show how aggressive the whites are toward blacks. Their definition and belief is that differing ideas, beliefs, convictions, and actions are what elevate the value of a particular group or category at the expense of other groups, based on inherited things related to people’s abilities, typologies, or habits. Their reliance on skin color, culture, place of residence, habits, language, or beliefs. It can also give the right to the category that has been raised by controlling other groups in their destinies, identities and depriving them of their rights and disrespect without a right or a clear cause. But in this article has been the events of what they lived in Alabama for many years, some of the influential events that were unfair to Africans, including some positions and defense by the white, and then the presence of KKK period of horror and massacres against Africans, followed by the duration of suffering that they have to If Martin Luther was a leader of the revolution and a beginning to have the rights to live and life.

The novel ‘To Kill Mockingbird ‘ traces an important aspect of the history of the United States of America to the policy of apartheid, as well as human values and models of innocence and the perseverance of a man who risks everything he has to defend his beliefs.    The meaning of the author of this article is to know and document the duration of the changes that have taken place since the ancient time that Harper Lee talked about in her book kill Mockingbird, to our present time, childish external living, and children’s innocence and love for learning and participation. For example, when Scout and Jem shared their father Atticus their opinion, talk with him, and learn from his culture and constructive ideas. There are some dramatic and dramatic events, such as the adventures of Scout and Jem abroad, and the events that happen to them, for example, when going to the house of Boo Radley, and including the trumped-up charge of Tom from the white woman, and the attempt to avenge Malaya’s father from the children of Atticus. What made the article more influential is the presence of emotions and feelings in the expression of the story, and try to document events with similar events at the time, this makes the reader sadder and affected that they lived injustice and enslavement. The writer wrote a message that luck is not always an ally of Africans there was not a lot of those who help and defend them as did Atticus with Tom, in a similar story, “the 1934 trial of a black man, Walter Lett, accused of raping a white woman. The case was shaky, the woman unreliable, no hard evidence; yet Walter Lett was convicted and sentenced to death. Before he was electrocuted, calls for clemency proved successful; but by then Lett had been languishing on Death Row too long, within earshot of the screams of doomed men down the hall, and he was driven mad. He died in an Alabama hospital in 1937” (Monroeville). His innocence was late after he received torture and slow death. The most important thing that led me to the article is the sharpness of words and the sharpness of the language, the insistence on remembering a harsh past that we should not even accept to repeat itself. The article considered that it was to make the reader aware that the mistakes of old times should not be committed. We can not accept injustice and cruelty, in dealing with people in fact they are like us and there is no difference between each other.

One of the most changing events in African life was in 1955 when a black woman named Rosa Parks and a white man were killed in a bus. The woman refused to leave her seat to the white passenger in accordance with the racial discrimination laws. The blacks, led by Martin Luther King, boycotted all the buses in Montgomery for two years and until 1956. The case was brought to the United States Supreme Constitutional Court, which abolished the racial discrimination laws on transportation. After this victory, Martin Luther King emerged as a strong leader around whom blacks gathered throughout the United States. Blacks were not allowed to engage in violence or riots even if the violence was self-defense. King organized the demonstrations in protest against every apartheid incident. King succeeded in passing laws to prevent black and white segregation in restaurants, entertainment venues, and parks. In response to Martin Luther King’s peaceful approach, some white fanatics burned churches frequented by blacks, homes, and restaurants, and abducted and killed innocent blacks. This violence has led to both blacks and whites surrounding the leader Martin Luther King. In 1965, King led a peaceful demonstration from Selma to Montgomery, protesting that black citizens were not granted the right to elect their representatives on the state and US Congress. As a result of this demonstration, a law was passed that gives the right to elections to all citizens regardless of the colors of their skin. In 1963, the Supreme Constitutional Court approved the admission of black schools and universities to blacks. However, state governor George Dallas prevented two black students from attending high school in Alabama and then prevented other students from joining the University of Alabama, prompting President Kennedy to intervene through the National Guard to resolve the problem. King led the path of peaceful resistance to social and electoral rights for blacks, a process that culminated in the 1979 election of Black Mayor Richard Arrington of Birmingham, more than ten years after the assassination of leader King by a white fanatic. But this progress was a miracle and a message of human peace that brought together and loved people. This is why the writing of the article and the remainder of the meaning. In my opinion, the title of To Kill Mockingbird was about the Mockingbird nice and beautiful and good sound that does not hurt anyone, but in fact, is a metaphor for the Africans they are people with feelings and conscience and there is no difference between them and another, and the meaning of why they were killed innocent people do not assault anyone, are they guilty only because they have a different skin color! What a backwardness.

Despite the success of black Americans in the elimination of slavery and apartheid, their society is still suffering from the manifestations of lagging and many problems of American standards. Half a century after Martin Luther King’s historic speech ‘I have a Dream,’ the difficult living conditions of blacks in America are still there. But it is hard to say that the black American has won all the rights and opportunities for his white counterpart. Yes, the living conditions of blacks have generally improved, but the differences remain stark. What America has seen in the past and so far there are some white fanatics and a lot of racism is an accurate translation of what Martin Luther King, the historic leader of American blacks, said that “Riots are a language that is not heard”(King, M). From here, the struggle of blacks and other non-believers becomes an ongoing process even if a black American arrives at the White House throne. ‘There is no such thing as a struggle for a small, temporary or temporary right, but there is a permanent struggle for a human being. God created him free and he has to live free and dignified'(King, M).

The Revolution And A Beginning To Have The Rights To Live And Life. (2021, May 26). Retrieved from https://papersowl.com/examples/the-revolution-and-a-beginning-to-have-the-rights-to-live-and-life/