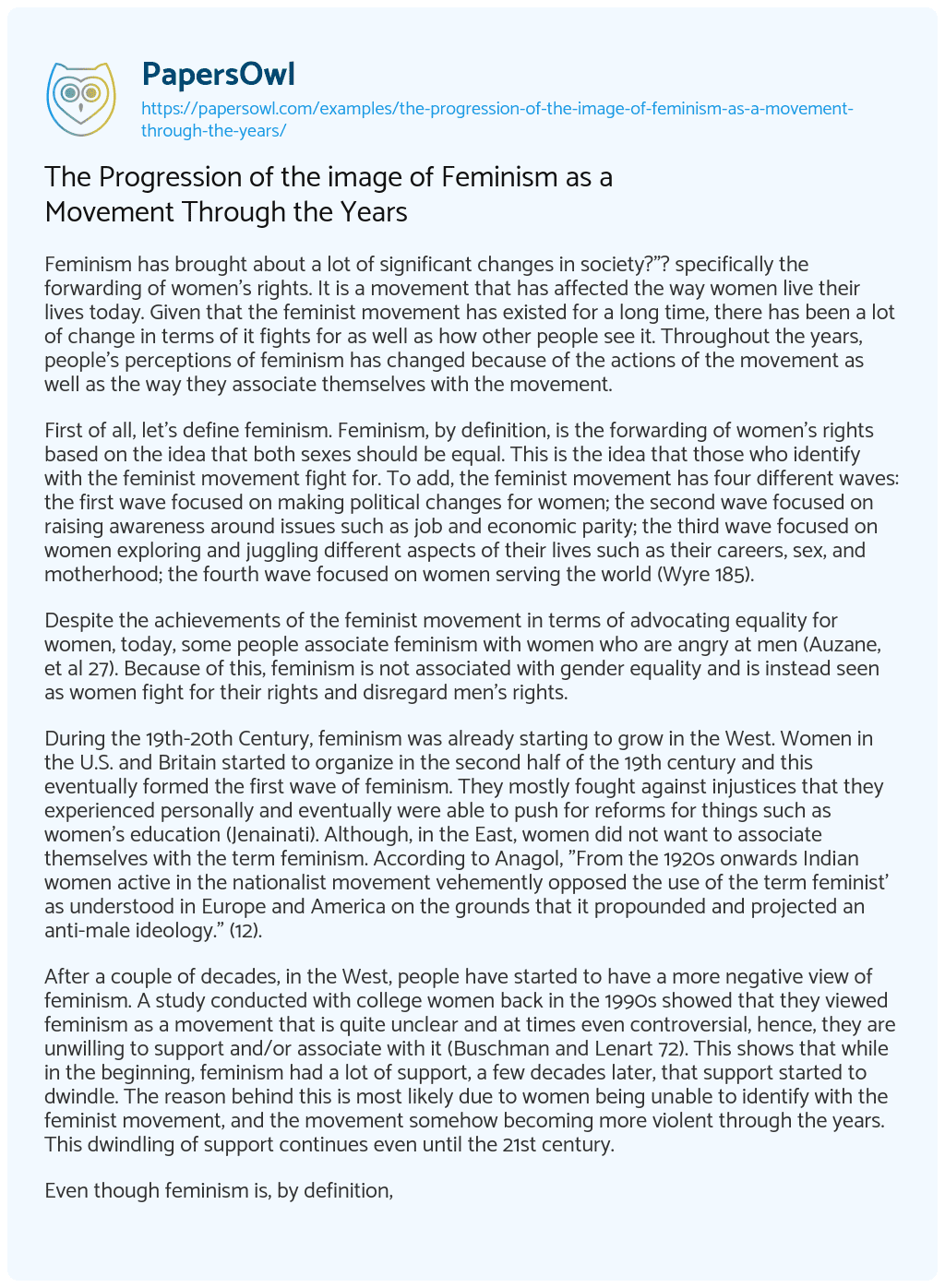 Feminism has brought about a lot of significant changes in society?”? specifically the forwarding of women’s rights. It is a movement that has affected the way women live their lives today. Given that the feminist movement has existed for a long time, there has been a lot of change in terms of it fights for as well as how other people see it. Throughout the years, people’s perceptions of feminism has changed because of the actions of the movement as well as the way they associate themselves with the movement.

First of all, let’s define feminism. Feminism, by definition, is the forwarding of women’s rights based on the idea that both sexes should be equal. This is the idea that those who identify with the feminist movement fight for. To add, the feminist movement has four different waves: the first wave focused on making political changes for women; the second wave focused on raising awareness around issues such as job and economic parity; the third wave focused on women exploring and juggling different aspects of their lives such as their careers, sex, and motherhood; the fourth wave focused on women serving the world (Wyre 185).

Despite the achievements of the feminist movement in terms of advocating equality for women, today, some people associate feminism with women who are angry at men (Auzane, et al 27). Because of this, feminism is not associated with gender equality and is instead seen as women fight for their rights and disregard men’s rights.

During the 19th-20th Century, feminism was already starting to grow in the West. Women in the U.S. and Britain started to organize in the second half of the 19th century and this eventually formed the first wave of feminism. They mostly fought against injustices that they experienced personally and eventually were able to push for reforms for things such as women’s education (Jenainati). Although, in the East, women did not want to associate themselves with the term feminism. According to Anagol, “From the 1920s onwards Indian women active in the nationalist movement vehemently opposed the use of the term feminist’ as understood in Europe and America on the grounds that it propounded and projected an anti-male ideology.” (12).

After a couple of decades, in the West, people have started to have a more negative view of feminism. A study conducted with college women back in the 1990s showed that they viewed feminism as a movement that is quite unclear and at times even controversial, hence, they are unwilling to support and/or associate with it (Buschman and Lenart 72). This shows that while in the beginning, feminism had a lot of support, a few decades later, that support started to dwindle. The reason behind this is most likely due to women being unable to identify with the feminist movement, and the movement somehow becoming more violent through the years. This dwindling of support continues even until the 21st century.

Even though feminism is, by definition, fighting for the equality of the sexes, men in particular don’t see it that way. A study conducted by Auzane, et al concluded that men have a negative perception of feminism. They believe that feminists are women who hate men that prioritize themselves over men, which is contradictory to gender equality (39).

Because of this, it is safe to conclude that feminism has been seen as a movement that hates men, and this has even hindered women from supporting the movement. According to Paludi, while most women believe in the goals of the feminist movement, they don’t want to identify as feminists because of the idea that feminists are seen as man-haters (5). While the principles of feminism stand strong, the image of the movement has made people not want to support it. This is due to some feminists acting in unconventional ways and not conforming to certain gender expectations (Paludi 9). Indeed, feminism has developed a bad image in the 21st century.

As I have shown, feminism was already starting to have a negative image in the 20th century, and this just progressed until today. Women were not able to relate to the feminist movement because of various reasons, specifically, because feminism was viewed as a man-hating movement. The image of feminism has progressed through the years. However, it has progressed negatively.

The Progression of the image of Feminism as a Movement Through the Years. (2019, Dec 26). Retrieved from https://papersowl.com/examples/the-progression-of-the-image-of-feminism-as-a-movement-through-the-years/

Feminism is a Social Movement and a Field of Study