The Problem, Solution, and Long-Term Effects of Cyber Bullying on Children 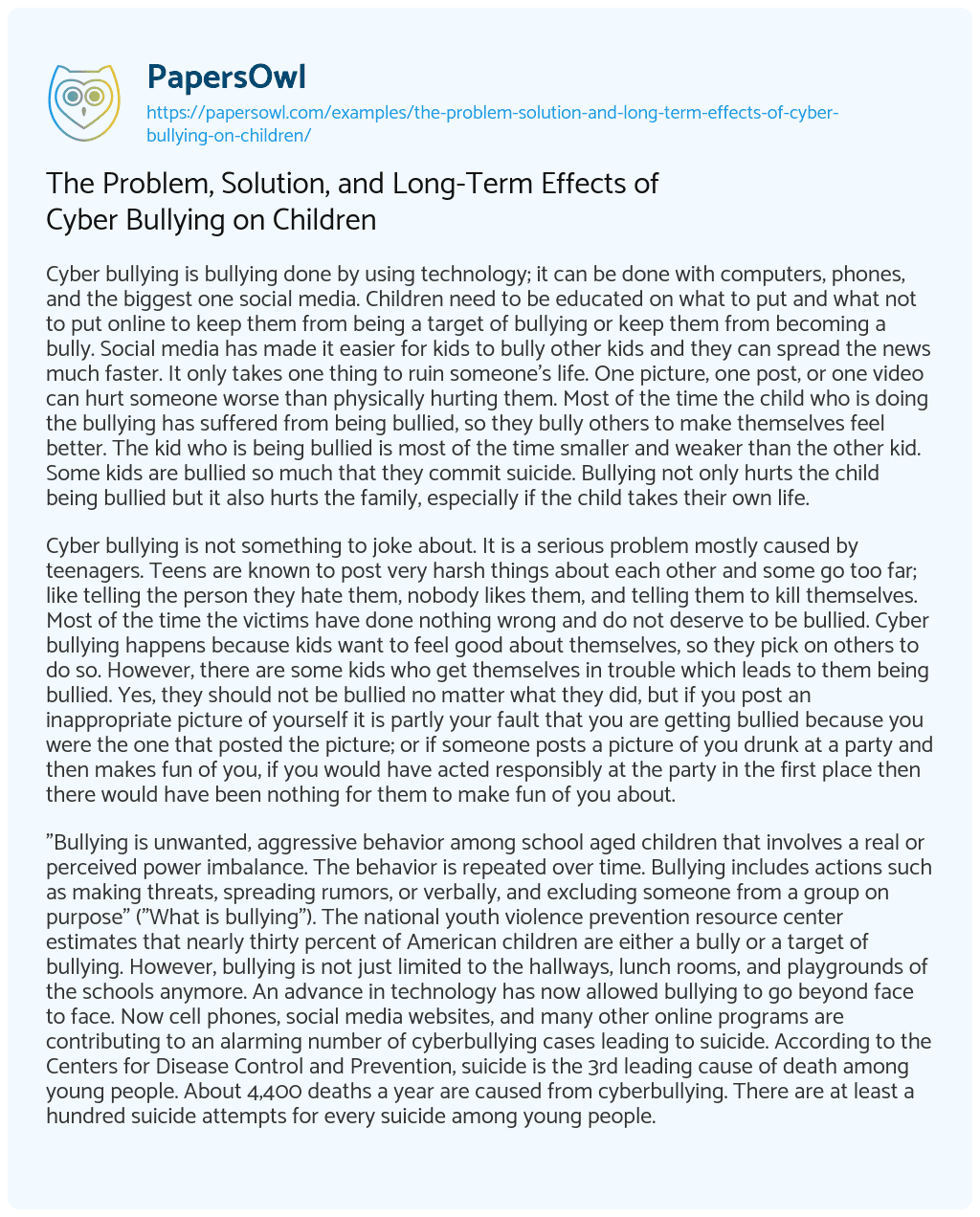 Cyber bullying is bullying done by using technology; it can be done with computers, phones, and the biggest one social media. Children need to be educated on what to put and what not to put online to keep them from being a target of bullying or keep them from becoming a bully. Social media has made it easier for kids to bully other kids and they can spread the news much faster. It only takes one thing to ruin someone’s life. One picture, one post, or one video can hurt someone worse than physically hurting them. Most of the time the child who is doing the bullying has suffered from being bullied, so they bully others to make themselves feel better. The kid who is being bullied is most of the time smaller and weaker than the other kid. Some kids are bullied so much that they commit suicide. Bullying not only hurts the child being bullied but it also hurts the family, especially if the child takes their own life.

Cyber bullying is not something to joke about. It is a serious problem mostly caused by teenagers. Teens are known to post very harsh things about each other and some go too far; like telling the person they hate them, nobody likes them, and telling them to kill themselves. Most of the time the victims have done nothing wrong and do not deserve to be bullied. Cyber bullying happens because kids want to feel good about themselves, so they pick on others to do so. However, there are some kids who get themselves in trouble which leads to them being bullied. Yes, they should not be bullied no matter what they did, but if you post an inappropriate picture of yourself it is partly your fault that you are getting bullied because you were the one that posted the picture; or if someone posts a picture of you drunk at a party and then makes fun of you, if you would have acted responsibly at the party in the first place then there would have been nothing for them to make fun of you about.

“Bullying is unwanted, aggressive behavior among school aged children that involves a real or perceived power imbalance. The behavior is repeated over time. Bullying includes actions such as making threats, spreading rumors, or verbally, and excluding someone from a group on purpose” (“What is bullying”). The national youth violence prevention resource center estimates that nearly thirty percent of American children are either a bully or a target of bullying. However, bullying is not just limited to the hallways, lunch rooms, and playgrounds of the schools anymore. An advance in technology has now allowed bullying to go beyond face to face. Now cell phones, social media websites, and many other online programs are contributing to an alarming number of cyberbullying cases leading to suicide. According to the Centers for Disease Control and Prevention, suicide is the 3rd leading cause of death among young people. About 4,400 deaths a year are caused from cyberbullying. There are at least a hundred suicide attempts for every suicide among young people. Fourteen percent of high schoolers have considered taking their life and seven percent have tried it. (“The Top Six Unforgettable CyberBullying Cases Ever”)

Cyber bullying is a problem because it is hurting kids and making them feel like a nobody. It makes children lonely, kill themselves, cut themselves, have no friends, have to change schools, move houses, not invited to anything, and can’t go anywhere without being humiliated. Kids who are bullied can also feel isolated and unwanted; which makes them feel like no one cares about them and causes them to never get out of their home.

The long term effects of cyber bullying can be very severe. Some children can be bullied and hurt bad enough to take their own lives. Suicide can seem like the only way out for some kids; this can also tear a family apart. Bullying not only effects the child being bullied but the family as well. Cyber bullying may lead to physical bullying as well. It can all start online as just a little mean post that does not seem like a big deal; then everyone sees it and then people start to avoid the child at school because of what they read online.

One case of cyber bullying involved a child named Ryan Halligan. He had trouble with his speech and motor skills. Because of his disabilities, Ryan was constantly bullied. Ryan made the mistake of sharing an embarrassing story with the bully that he though was his friend. The bully then started a rumor that he was gay. Ryan then thought he was in an online relationship with a girl and told her more stories about his personal life. The girl copied and pasted what Ryan typed and showed it to her friends. On October 7, 2003 Ryan hung himself because the bullying was too much for him to take. There were no charges filed on the bullies that caused Ryan to take his life. Another case was Megan Meier who struggled with attention deficit disorder and depression. She met who she thought was a guy that liked her. They talked online for a while but then the guy told her “The world would be a better place without you.” This broke Megan’s heart and 20 minutes later she hung herself. (“The Top Six Unforgettable CyberBullying Cases Ever”)

Bullying needs to stop before any more kids suffer. However, I don’t believe bullying will ever be fully gone, but I do think it can be minimized to an extremely small amount. Kids need to be educated about bullying. They need to know it hurts to be bullied and no one should have to live with being bullied. It should be the schools and parents’ responsibility to teach children about bullying. I think it’s more of the parents job then the schools; parents should teach kids how to use social media and tell them what they can post and what can be hurtful to people when they post it. It should be the parents responsibly to inform their child about bullying and how it can harm other kids. They should also check and see what their child is posting on social media and make sure they are not bullying other kids. Parents are responsible for their kids actions up to a certain age. I think once the child gets over the age of 15 it can be hard for parents to always watch their kids by the time they are that age it should be the child’s responsibility. By the time they get that age, there is only so much parents can do. They cannot completely control their child. I think schools should be responsible for physical bullying but not with cyber bullying. Most cyber bullying takes place outside of school so it should not be the schools responsibly.

The bully should be punished for any kind of harm they caused to the victim. If the child commits suicide, I think their should be a greater punishment and that is when law enforcement should step in. I think every child under the age of fifteen should get a second chance because they are kids and as many do, some do not know any better. Some should go to jail especially if the child commits suicide. How long they stay in jail should be based on exactly what they did to cause the victim to kill themselves. Every case is different. There was a girl that jumped off a bridge because two girls were bullying her on Facebook. Both girls were arrested and charged with felony aggravated stalking. One girl stayed in jail overnight and the other was picked up by her parents. (“Teen Charged in Fatal Cyberbullying Case of Rebecca Sedwick to Remain in Jail”). To help the problem some kids need to learn not to care about what people say to them. They should not get wrapped up in everything people say and think about them. If the bully is under the age of sixteen, I think they should have not as harsh of a punishment, but only if it is their first time, they should get one chance because some kids really do not know better but if they have been told before about how bullying harms other people then they should get the same punishment as older bullies. Younger bullies should go to juvenile detention if its the first time they have bullied someone. Many people argue that since the bully did not actually kill the child they should not be punished and even though they may have caused the child to commit suicide that child was the one that killed themselves. The bully did not force them to.

Many people ask how can we stop cyber bullying. There are many theories that people have come up with. I believe you will never be able to completely stop cyber bullying. There will always be mean kids out there that will stop at nothing to harm others. However, I think the best way to limit bullying is through the parents. Parents should teach their kids at a very early age that harming other people through words is just as bad as physically hurting them. Teaching kids these necessary rules will help both the victims and the bullies. It will teach children how not to become victims of bullying by being smart when using social media and it will help reduce the number of children that end up being a bully.

The Problem, Solution, and Long-Term Effects of Cyber Bullying on Children. (2022, Nov 30). Retrieved from https://papersowl.com/examples/the-problem-solution-and-long-term-effects-of-cyber-bullying-on-children/

Effects of Bullying on the Victim

What is Cyber Bullying?

The Effects of Bullying and Cyber Bullying

The Effects of Bullying and Cyberbullying

What are the Causes of Cyber Bullying?