The Philippine Government and Middle Classes 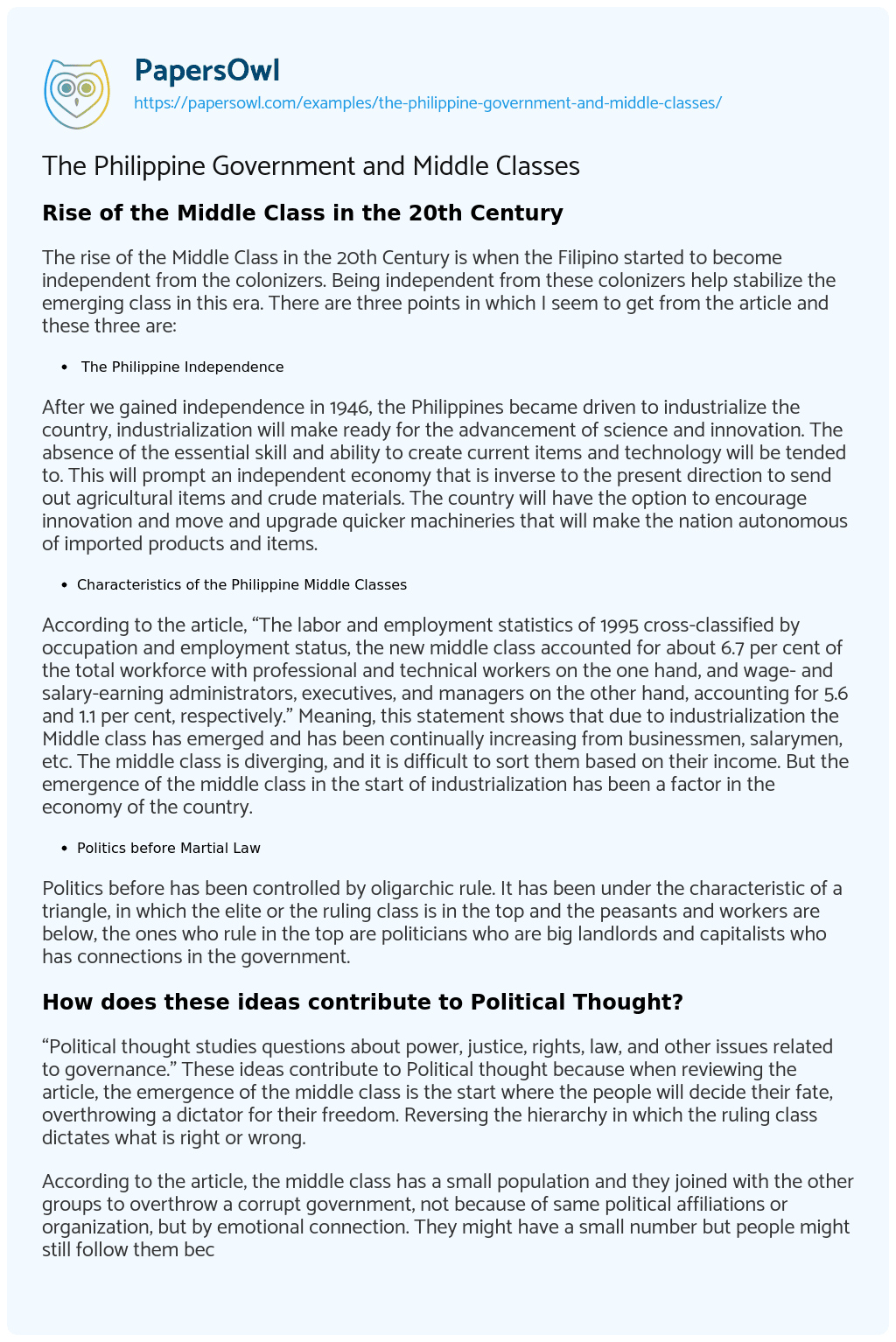 Rise of the Middle Class in the 20th Century

After we gained independence in 1946, the Philippines became driven to industrialize the country, industrialization will make ready for the advancement of science and innovation. The absence of the essential skill and ability to create current items and technology will be tended to. This will prompt an independent economy that is inverse to the present direction to send out agricultural items and crude materials. The country will have the option to encourage innovation and move and upgrade quicker machineries that will make the nation autonomous of imported products and items.

According to the article, “The labor and employment statistics of 1995 cross-classified by occupation and employment status, the new middle class accounted for about 6.7 per cent of the total workforce with professional and technical workers on the one hand, and wage- and salary-earning administrators, executives, and managers on the other hand, accounting for 5.6 and 1.1 per cent, respectively.” Meaning, this statement shows that due to industrialization the Middle class has emerged and has been continually increasing from businessmen, salarymen, etc. The middle class is diverging, and it is difficult to sort them based on their income. But the emergence of the middle class in the start of industrialization has been a factor in the economy of the country.

Politics before has been controlled by oligarchic rule. It has been under the characteristic of a triangle, in which the elite or the ruling class is in the top and the peasants and workers are below, the ones who rule in the top are politicians who are big landlords and capitalists who has connections in the government.

How does these ideas contribute to Political Thought?

“Political thought studies questions about power, justice, rights, law, and other issues related to governance.” These ideas contribute to Political thought because when reviewing the article, the emergence of the middle class is the start where the people will decide their fate, overthrowing a dictator for their freedom. Reversing the hierarchy in which the ruling class dictates what is right or wrong.

According to the article, the middle class has a small population and they joined with the other groups to overthrow a corrupt government, not because of same political affiliations or organization, but by emotional connection. They might have a small number but people might still follow them because of their capability.

The Philippine Government and Middle Classes. (2021, Oct 16). Retrieved from https://papersowl.com/examples/the-philippine-government-and-middle-classes/

Foundation of the Philippine Government

The Political Thoughts of Philippine Government