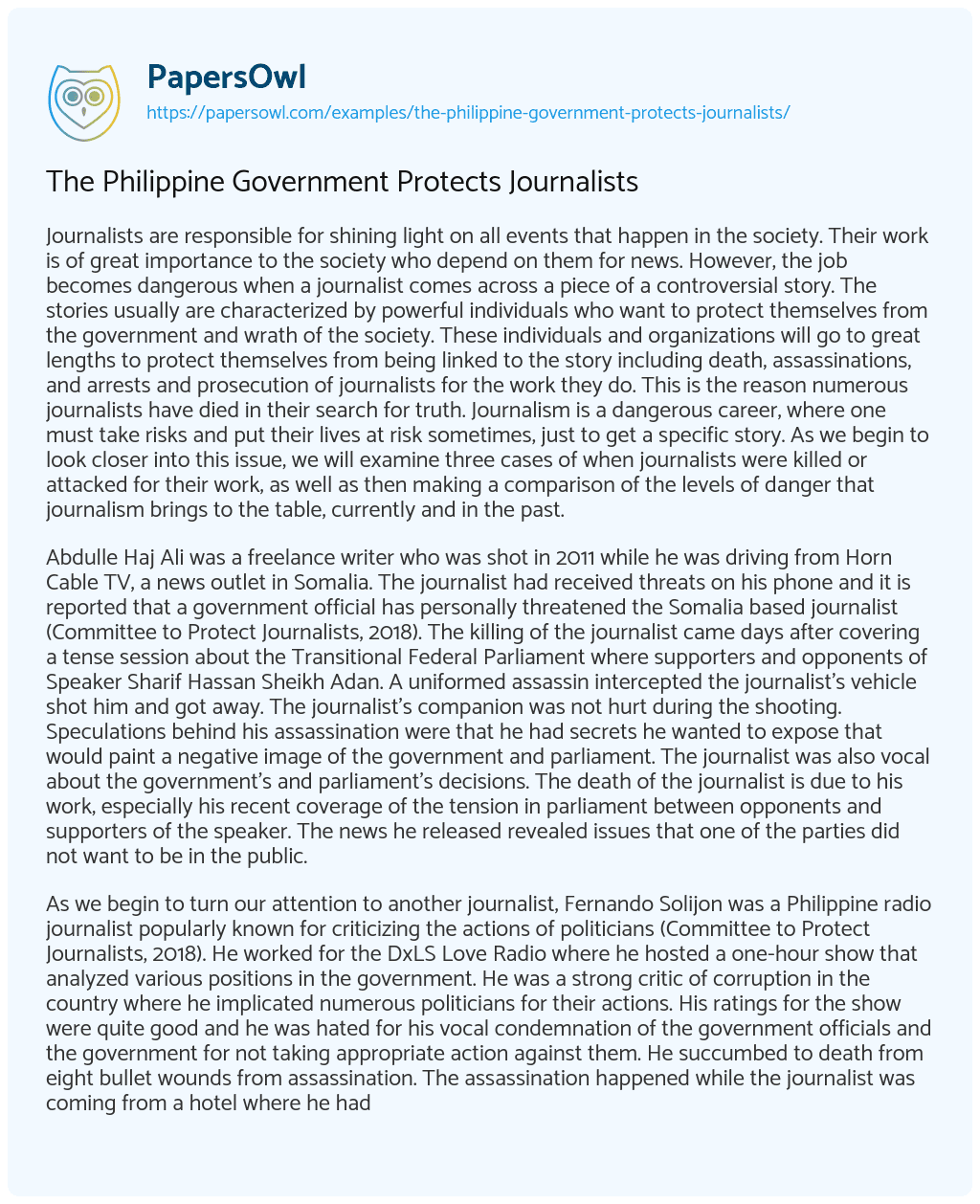 Journalists are responsible for shining light on all events that happen in the society. Their work is of great importance to the society who depend on them for news. However, the job becomes dangerous when a journalist comes across a piece of a controversial story. The stories usually are characterized by powerful individuals who want to protect themselves from the government and wrath of the society. These individuals and organizations will go to great lengths to protect themselves from being linked to the story including death, assassinations, and arrests and prosecution of journalists for the work they do. This is the reason numerous journalists have died in their search for truth. Journalism is a dangerous career, where one must take risks and put their lives at risk sometimes, just to get a specific story. As we begin to look closer into this issue, we will examine three cases of when journalists were killed or attacked for their work, as well as then making a comparison of the levels of danger that journalism brings to the table, currently and in the past.

Abdulle Haj Ali was a freelance writer who was shot in 2011 while he was driving from Horn Cable TV, a news outlet in Somalia. The journalist had received threats on his phone and it is reported that a government official has personally threatened the Somalia based journalist (Committee to Protect Journalists, 2018). The killing of the journalist came days after covering a tense session about the Transitional Federal Parliament where supporters and opponents of Speaker Sharif Hassan Sheikh Adan. A uniformed assassin intercepted the journalist’s vehicle shot him and got away. The journalist’s companion was not hurt during the shooting. Speculations behind his assassination were that he had secrets he wanted to expose that would paint a negative image of the government and parliament. The journalist was also vocal about the government’s and parliament’s decisions. The death of the journalist is due to his work, especially his recent coverage of the tension in parliament between opponents and supporters of the speaker. The news he released revealed issues that one of the parties did not want to be in the public.

As we begin to turn our attention to another journalist, Fernando Solijon was a Philippine radio journalist popularly known for criticizing the actions of politicians (Committee to Protect Journalists, 2018). He worked for the DxLS Love Radio where he hosted a one-hour show that analyzed various positions in the government. He was a strong critic of corruption in the country where he implicated numerous politicians for their actions. His ratings for the show were quite good and he was hated for his vocal condemnation of the government officials and the government for not taking appropriate action against them. He succumbed to death from eight bullet wounds from assassination. The assassination happened while the journalist was coming from a hotel where he had met with friends. Solijon was a loved personality among the locals for his open condemnation of any impunity in the government. Based on the police investigations, his death is due to his work which includes being critical of corruption in the country and the rising cases of crime. His murder adds up to the tally of 159 journalists who were killed because of their work and their murders have not been solved.

Thirdly, and the most politically involved case, we look at the European Federations of Journalists joining the Russian Union of Journalists in putting pressure on the Russian government to solve the murder of journalist Dmitry Popkov. Mr. Popkov was greatly known for his fight against corruption and abuse of power. He was also a great critique of the ruling United Russia Party (Committee to Protect Journalists, 2018). Popkov was an investigative journalist whose revelations of corruption in the government had led to concerns and subsequent raids of Ton-M, the newspaper he helped establish. Mr. Popkov’s newspaper has been raising concerns on the news they have been publishing which includes criticizing the government and politicians for their illegal activities. His most recent story may be the reason for his killing. It is said that a recent audit in parliament had revealed high levels of corruption in local administration and he intended to make this public. His newspaper, Ton-M, runs under the motto “We write the things others stay silent about”. The newspaper has been under pressure from the government about the work it has been publishing as well as several police raids. With the already existing concerns about his work and his non-tolerance for corruption, it is believed that his death was the only way some government officials could silence him. His discovery of the corruption in administration would have led to a lot of questions towards corruption and maybe riots. His death is directly linked to his work though the police are looking into other reasons. His work stays at the top of their list as the cause of murder. The Russian government has, however, received pressure to solve the murder since his death by various organizations.

Based on the three examples above, journalism is currently considered a dangerous profession, especially for journalists who decide to cover sensitive issues like corruption and political issues. According to data from the CPJ, the number of journalists who are killed in war zones, assassinated or arrested for reporting serious issues has been high. The number of cases of unsolved journalist murders is also high. For instance, Solijon became the 159th unsolved murder case in Philippine (Dietz, 2013). The government is slow to solve such murders given the amount of exposure that it is bound to get.

In some nations, the government protects journalists given their constitutional rights as citizens and the freedom of speech. However, in other nations, especially second and third world countries, freedom of speech is more of a theory than practical right for journalists who have both a professional and moral responsibility to say the truth as it is. Journalists are not receiving the level of safety that they deserve. For nations like Somalia and the Philippines, the government tends to have a need to protect itself from any news that will tarnish its image and credibility among the people. Therefore, some journalists face death or arrest for the news they report. This is a method devised to silence journalists and ensure that the number of journalists willing to report on the same issue does not increase.

The common trend about these deaths and arrests is that they are normally linked to the government. All three cases mentioned above are linked to the government. The three journalists were active in condemning government actions especially impunity and the actions of politicians. Since those in power want the realm to remain the same and undisturbed, gagging such journalists works for them when the government is willing to turn a blind eye. This makes journalism a career that one has to thoroughly consider the risks before pursuing (Carter & Kodrich, 2013). The issues in journalism also extend to covering news in dangerous areas like areas prone to diseases, wars, and bad weather. All these are risks that journalists have to take to report their news and make the world know about what is happening. The level of risk is based on the nation one is in. for third world countries, safety for journalists is not a guarantee especially when the journalist covers an activity that the government does not want to be exposed. In second world countries, the safety is also not a guarantee based on the type of news that one chooses to cover. Developed nations have better protection for journalists. However, the journalists are not immune to threats when they cover topics that are of great significance and attract a lot of attention from the public for a wrongdoing.

In conclusion, journalism is a great career for individuals who love the truth and are willing to go the extra mile to uncover the truth. Since the establishment of journalism, journalists have been at great risk for the type of news they cover. Hundreds of deaths have been reported due to a piece of news that a journalist was covering. The trend does not seem to change with some nations reporting a higher number of journalists dying due to assassinations and prosecution. Some nations have resolved to protect journalists due to their importance in the development of the society. However, journalists are also not safe in these nations. The examples given above are just but a peek at how journalism can get. While the society enjoys getting the truth from the various media outlets, journalists have to put on a tough face before they can bring the juicy stories to the people. The numerous risks that they face especially those who decide to cover stories in war zones are tremendous. The examples are derived from nations at different levels of development to show that immunity from danger for any journalist is not a guarantee. There is a call for better protection of journalists given the trends. Journalists will continue to get exposed to danger as long as they seek for the truth. Therefore, one has to factor in the dangers of becoming a journalist before pursuing the career. The career is adventurous and rejuvenating when one gets a story that changes the life of someone or discovers something that is hidden from the society. However, factoring in the dangers will give anyone a better perspective when coming to one of the most fulfilling careers ever. As they say, the pen is heavier than the sword.

The Political Thoughts of Philippine Government

Foundation of the Philippine Government

The Philippine Government and Middle Classes