The not so Happy Days 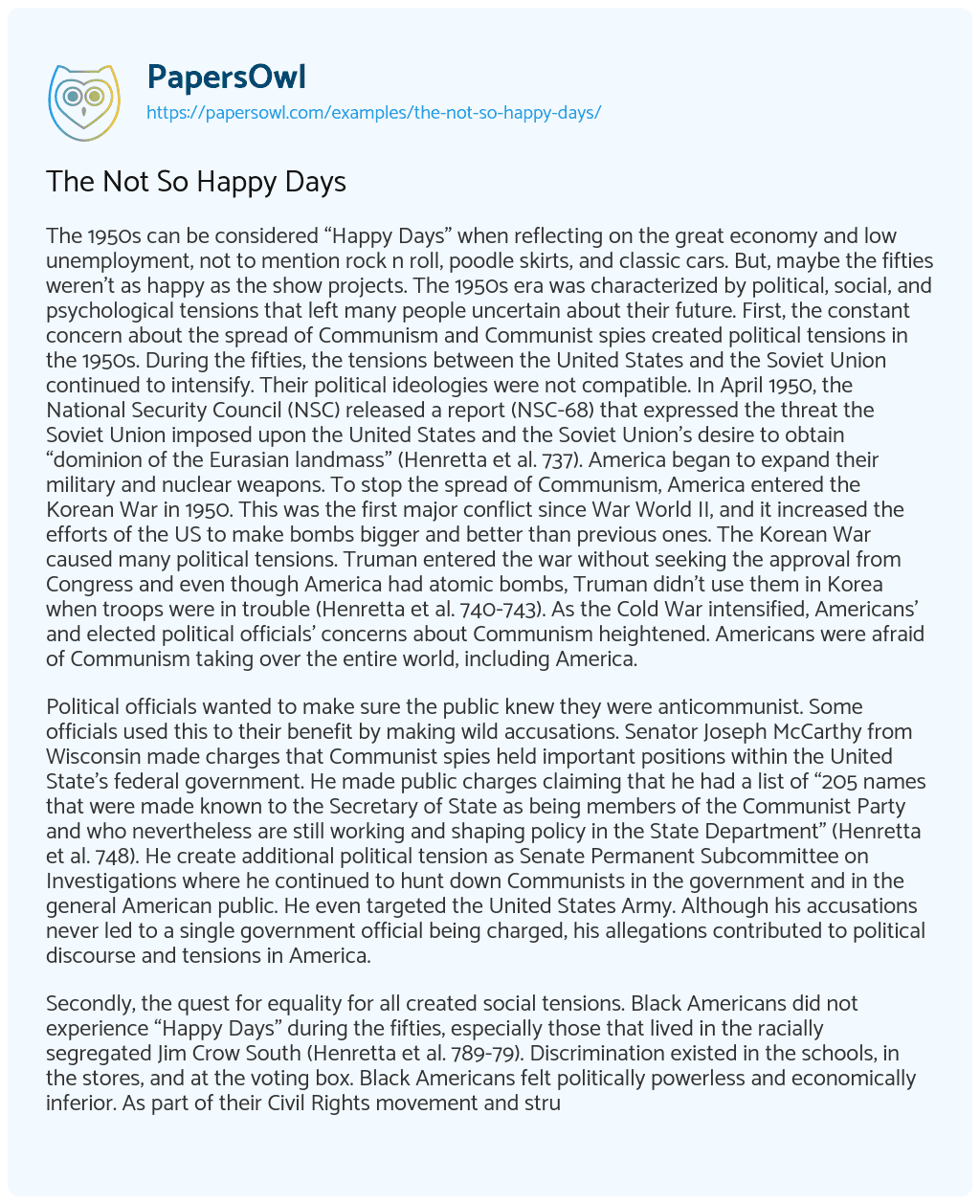 The 1950s can be considered “Happy Days” when reflecting on the great economy and low unemployment, not to mention rock n roll, poodle skirts, and classic cars. But, maybe the fifties weren’t as happy as the show projects. The 1950s era was characterized by political, social, and psychological tensions that left many people uncertain about their future. First, the constant concern about the spread of Communism and Communist spies created political tensions in the 1950s. During the fifties, the tensions between the United States and the Soviet Union continued to intensify. Their political ideologies were not compatible. In April 1950, the National Security Council (NSC) released a report (NSC-68) that expressed the threat the Soviet Union imposed upon the United States and the Soviet Union’s desire to obtain “dominion of the Eurasian landmass” (Henretta et al. 737). America began to expand their military and nuclear weapons. To stop the spread of Communism, America entered the Korean War in 1950. This was the first major conflict since War World II, and it increased the efforts of the US to make bombs bigger and better than previous ones. The Korean War caused many political tensions. Truman entered the war without seeking the approval from Congress and even though America had atomic bombs, Truman didn’t use them in Korea when troops were in trouble (Henretta et al. 740-743). As the Cold War intensified, Americans’ and elected political officials’ concerns about Communism heightened. Americans were afraid of Communism taking over the entire world, including America.

Political officials wanted to make sure the public knew they were anticommunist. Some officials used this to their benefit by making wild accusations. Senator Joseph McCarthy from Wisconsin made charges that Communist spies held important positions within the United State’s federal government. He made public charges claiming that he had a list of “205 names that were made known to the Secretary of State as being members of the Communist Party and who nevertheless are still working and shaping policy in the State Department” (Henretta et al. 748). He create additional political tension as Senate Permanent Subcommittee on Investigations where he continued to hunt down Communists in the government and in the general American public. He even targeted the United States Army. Although his accusations never led to a single government official being charged, his allegations contributed to political discourse and tensions in America.

Secondly, the quest for equality for all created social tensions. Black Americans did not experience “Happy Days” during the fifties, especially those that lived in the racially segregated Jim Crow South (Henretta et al. 789-79). Discrimination existed in the schools, in the stores, and at the voting box. Black Americans felt politically powerless and economically inferior. As part of their Civil Rights movement and struggle for equality, they started challenging segregation in the courts. In 1954, the Supreme Court ruled that racial segregation in schools was unconstitutional in Brown v Board of Education of Topeka. This led to protests and great social tensions; in 1956 only 14% of southerners approved of integrating the schools (Leib 580). Social tensions intensified when desegregation was linked to the Cold War and the Soviet Union’s success. The Governor of Georgia was quoted in Life Magazine saying, “Certainly history shows that nations composed of a mongrel race lose their strength and become weak, lazy and indifferent. They become easy prey to outside nations. And isn’t that just exactly what the Communists want to happen in the United States’’ (Leib 581). The Governor of Arkansas called out the National Guard to prevent black students from attending school with white students (Henretta et al. 800). The Cold War was also linked to racial segregation in the creation of a national civil defense strategy. Social tensions were high when Millard Caldwell (a pro-Jim Crow Southern ex-governor) was appointed as the head of the Federal Civil Defense Administration. Many in the black community felt the Federal Civil Defense Administration was only interested in protecting white Americans from a nuclear attack (Leib 582-583).

Finally, psychological tensions existed during the fifties along with an abundance of psychopharmaceuticals. Due to the strains from everyday life, “Anxiety was at the forefront of medical and psychiatric attention in the United States” (Horwitz 113). A new prescription drug called Miltown was developed in 1955 and used to treat stress, anxiety, and tension associated with anxiousness. This tranquilizer became the most popular United States prescription drug; one in twenty Americans was taking Milton by 1956. By 1957, there had been 35 million prescriptions written for the “happy” drug (Horwitz 115). During the fifties, women experienced anxiousness because they felt somewhat trapped being a perfect housewife. Men felt stress because they had to portray a dominate male mentality (Henretta et al. 777). Added to the stress of the traditional gender roll, was the constant paranoia of nuclear attack and Communism. Americans were afraid that Communism was invading the country. Films would show the horror of nuclear bombs. The Cold War was a constant stressful presence in the life of all Americans, both young and old. Adults constructed bomb shelters and stockpiled goods. Children were made aware that their future may be no longer and that they may be the last generation of children on earth. The parents, government, and teachers all prepared them for the possibility of nuclear annihilation, “The first graders…learned to spell ‘atom’ and ‘bomb’ before they learned ‘mother’” (Jacobs 25).

The Not So Happy Days. (2021, Mar 19). Retrieved from https://papersowl.com/examples/the-not-so-happy-days/