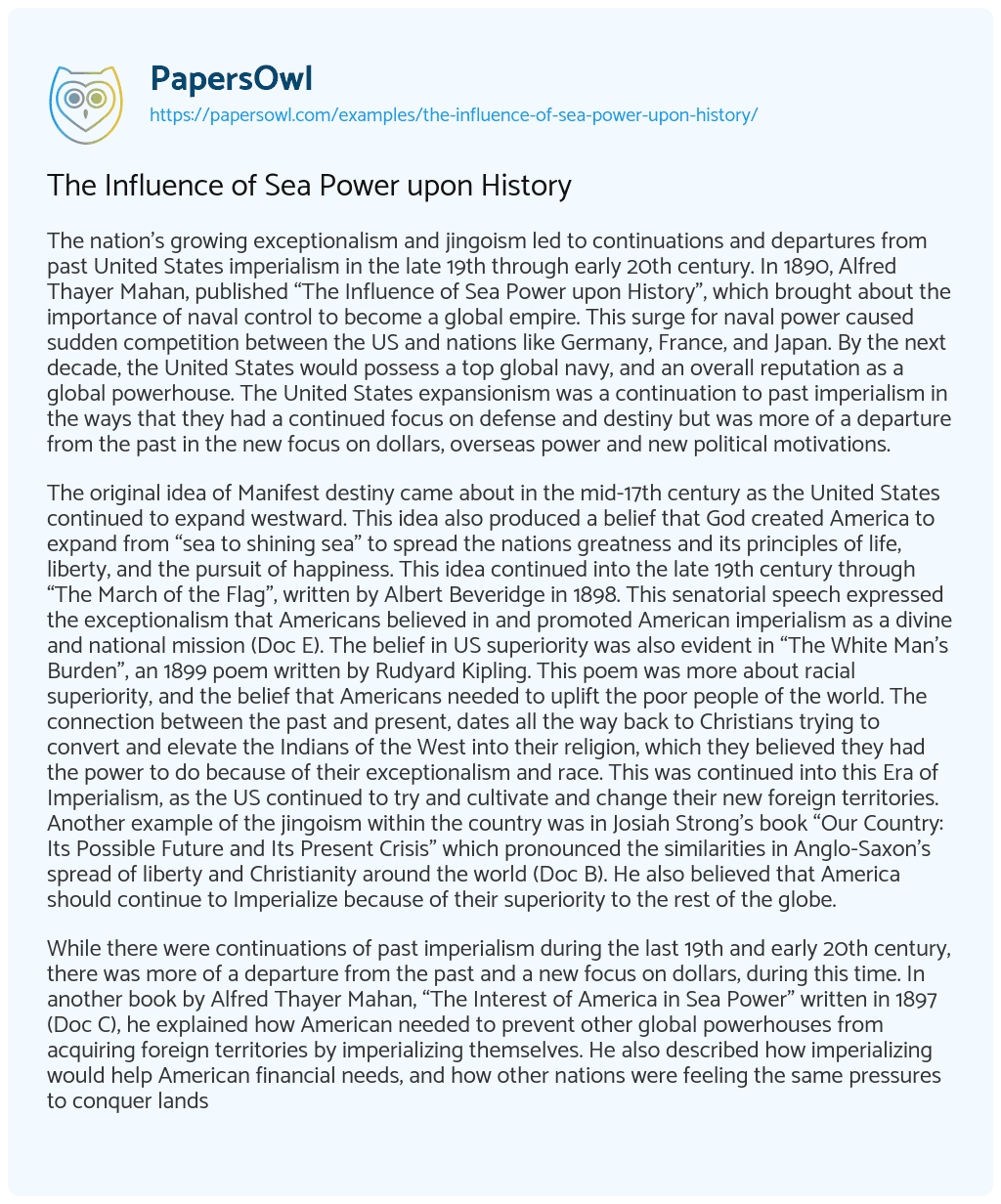 The nation’s growing exceptionalism and jingoism led to continuations and departures from past United States imperialism in the late 19th through early 20th century. In 1890, Alfred Thayer Mahan, published “The Influence of Sea Power upon History”, which brought about the importance of naval control to become a global empire. This surge for naval power caused sudden competition between the US and nations like Germany, France, and Japan. By the next decade, the United States would possess a top global navy, and an overall reputation as a global powerhouse. The United States expansionism was a continuation to past imperialism in the ways that they had a continued focus on defense and destiny but was more of a departure from the past in the new focus on dollars, overseas power and new political motivations.

The original idea of Manifest destiny came about in the mid-17th century as the United States continued to expand westward. This idea also produced a belief that God created America to expand from “sea to shining sea” to spread the nations greatness and its principles of life, liberty, and the pursuit of happiness. This idea continued into the late 19th century through “The March of the Flag”, written by Albert Beveridge in 1898. This senatorial speech expressed the exceptionalism that Americans believed in and promoted American imperialism as a divine and national mission (Doc E). The belief in US superiority was also evident in “The White Man’s Burden”, an 1899 poem written by Rudyard Kipling. This poem was more about racial superiority, and the belief that Americans needed to uplift the poor people of the world. The connection between the past and present, dates all the way back to Christians trying to convert and elevate the Indians of the West into their religion, which they believed they had the power to do because of their exceptionalism and race. This was continued into this Era of Imperialism, as the US continued to try and cultivate and change their new foreign territories. Another example of the jingoism within the country was in Josiah Strong’s book “Our Country: Its Possible Future and Its Present Crisis” which pronounced the similarities in Anglo-Saxon’s spread of liberty and Christianity around the world (Doc B). He also believed that America should continue to Imperialize because of their superiority to the rest of the globe.

While there were continuations of past imperialism during the last 19th and early 20th century, there was more of a departure from the past and a new focus on dollars, during this time. In another book by Alfred Thayer Mahan, “The Interest of America in Sea Power” written in 1897 (Doc C), he explained how American needed to prevent other global powerhouses from acquiring foreign territories by imperializing themselves. He also described how imperializing would help American financial needs, and how other nations were feeling the same pressures to conquer lands overseas before their competing nations did (Doc A). Theodore Roosevelt and Henry Cabot Lodge both supported the ideas in this book and responded by entering the nation into the Spanish-American War, with the biggest motivation being capturing new lands. Roosevelts first move was acquiring part of the Philippine’s from Spain right as the war began in 1898. The Philippines being the first of many acquired territories from Spain, it was purchased with the impression of it being a colony. The US expected the Philippines to provide new markets for products and raw materials like coal and petroleum. The US denied the Philippines of citizenship in the Supreme Court Case Downes vs. Bidwell (Doc H). The Supreme Court decided that US territories were not under the protection of the Constitution, therefore they were not of equal status and solely there to serve American welfares economically. Roosevelt also used his political power as the President in his Annual Message to Congress in late 1904. Roosevelt reminded Congress how important the Monroe Doctrine is for the US and to focus on keeping other nations like Germany and Britain out of the western hemisphere (Doc F). This new phase of politics and their motivations was clearly a departure from past imperialism since the past had a focus solely on ruling from “sea to shining sea” and maintaining their policies of independence and liberty.

This new Age of Imperialism brought about continuations of past cultural and social motivations to expand in the US, but more largely moved away from passed expansion and had more of a focus economic and political incentives. As the US became a global driving force, it became clear that Manifest Destiny and their so thought exceptionalism was the justification to imperialize. These thoughts of self-power and jingoism drove the American imperialists and shaped the country into our position of hegemony that we are in today.

The Influence of Sea Power upon History. (2021, Mar 19). Retrieved from https://papersowl.com/examples/the-influence-of-sea-power-upon-history/

Views on the US Overseas Expansion