Institutional Violence and Discrimination of Transgender 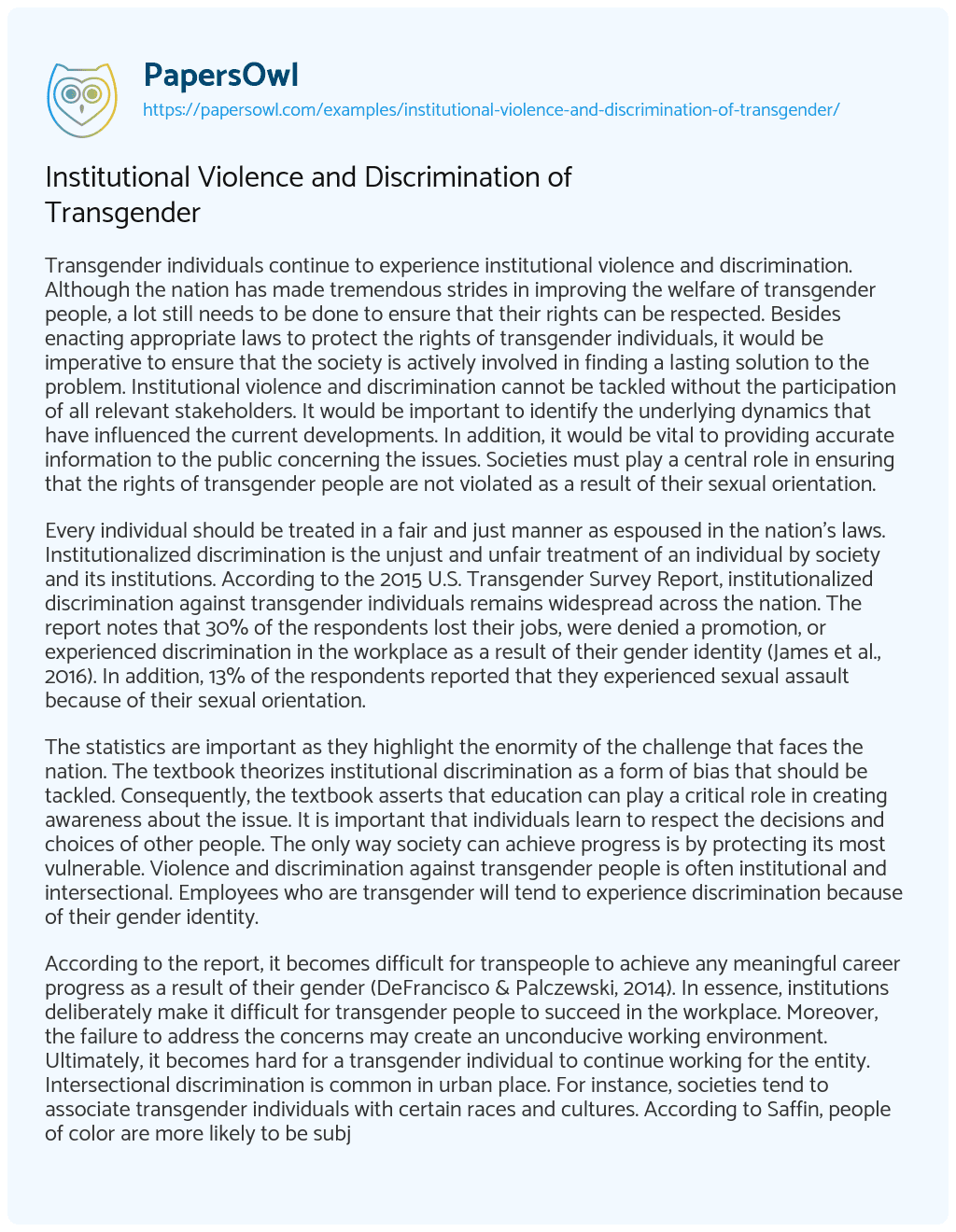 Transgender individuals continue to experience institutional violence and discrimination. Although the nation has made tremendous strides in improving the welfare of transgender people, a lot still needs to be done to ensure that their rights can be respected. Besides enacting appropriate laws to protect the rights of transgender individuals, it would be imperative to ensure that the society is actively involved in finding a lasting solution to the problem. Institutional violence and discrimination cannot be tackled without the participation of all relevant stakeholders. It would be important to identify the underlying dynamics that have influenced the current developments. In addition, it would be vital to providing accurate information to the public concerning the issues. Societies must play a central role in ensuring that the rights of transgender people are not violated as a result of their sexual orientation.

Every individual should be treated in a fair and just manner as espoused in the nation’s laws. Institutionalized discrimination is the unjust and unfair treatment of an individual by society and its institutions. According to the 2015 U.S. Transgender Survey Report, institutionalized discrimination against transgender individuals remains widespread across the nation. The report notes that 30% of the respondents lost their jobs, were denied a promotion, or experienced discrimination in the workplace as a result of their gender identity (James et al., 2016). In addition, 13% of the respondents reported that they experienced sexual assault because of their sexual orientation.

The statistics are important as they highlight the enormity of the challenge that faces the nation. The textbook theorizes institutional discrimination as a form of bias that should be tackled. Consequently, the textbook asserts that education can play a critical role in creating awareness about the issue. It is important that individuals learn to respect the decisions and choices of other people. The only way society can achieve progress is by protecting its most vulnerable. Violence and discrimination against transgender people is often institutional and intersectional. Employees who are transgender will tend to experience discrimination because of their gender identity.

According to the report, it becomes difficult for transpeople to achieve any meaningful career progress as a result of their gender (DeFrancisco & Palczewski, 2014). In essence, institutions deliberately make it difficult for transgender people to succeed in the workplace. Moreover, the failure to address the concerns may create an unconducive working environment. Ultimately, it becomes hard for a transgender individual to continue working for the entity. Intersectional discrimination is common in urban place. For instance, societies tend to associate transgender individuals with certain races and cultures. According to Saffin, people of color are more likely to be subjected to violence as a result of their gender. It is simply because some people in society believe that people of color cannot identify themselves as transgender. The perception should be tackled to ensure that people are not subjected to more discrimination because of skin color and sexual orientation (Saffin, 2011). Consequently, a transgender may be exposed to violence due to considerations such as race and culture. In the military, soldiers have often had to hide their sexual orientation because of the rules (Kerrigan, 2012).

One cannot ask about the issue or get an answer from the affected individuals. In conclusion, it is important to sensitize communities about the need to respect and uphold the rights of all people irrespective of sexual preference. The authorities have a critical role to play in ensuring that the law is enforced. Organizations should be encouraged to put in place appropriate measures to protect the rights of transgender people. For instance, it would be imperative to ensure that transgender people are not denied employment opportunities because of their sexual orientation. A comprehensive framework will have to be formulated to advance and protect the rights of all transgender individuals.

Institutional Violence and Discrimination of Transgender. (2021, Mar 19). Retrieved from https://papersowl.com/examples/institutional-violence-and-discrimination-of-transgender/

The Rights of Lesbian, Gay, Bisexual and Transgender