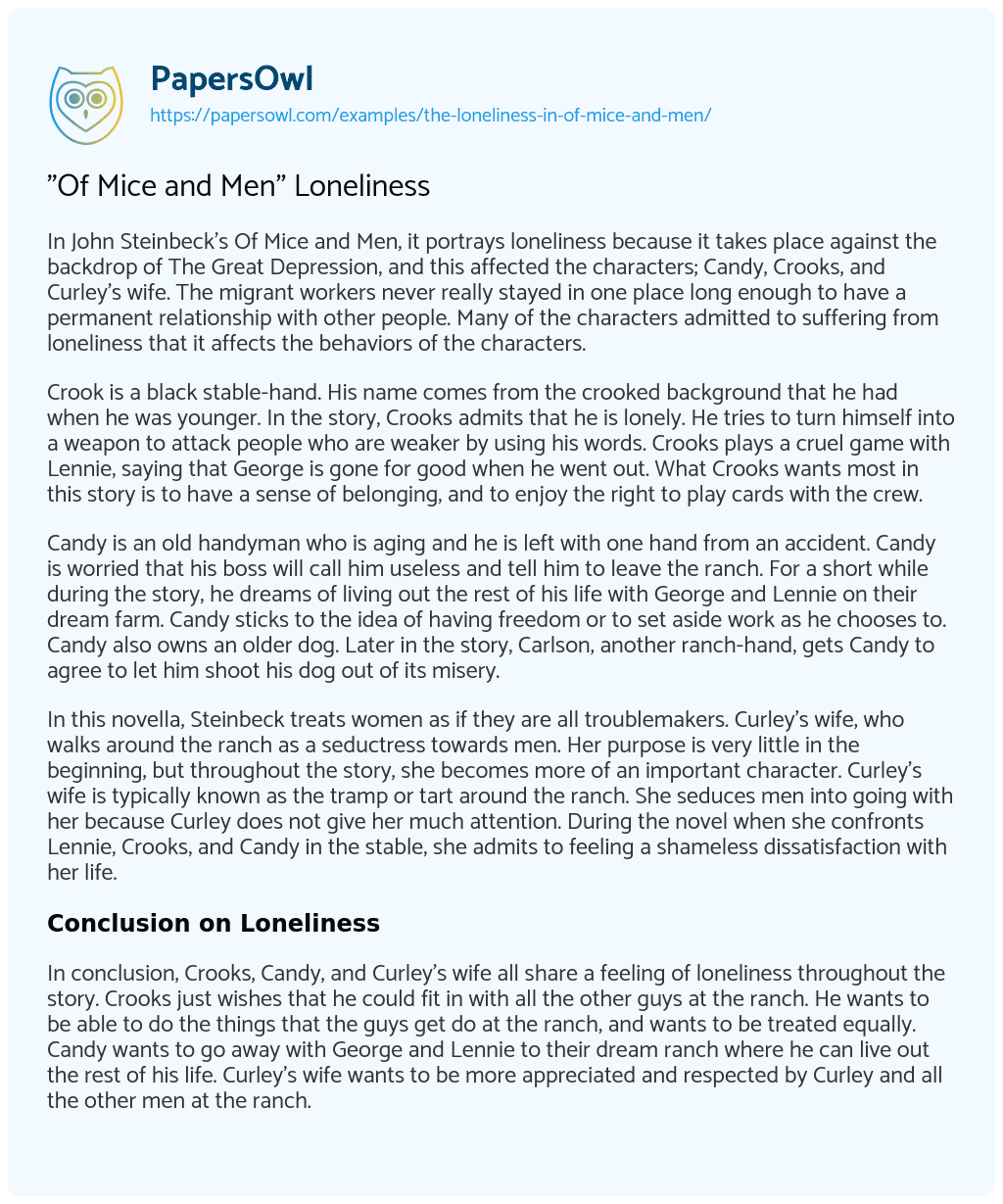 In John Steinbeck’s Of Mice and Men, it portrays loneliness because it takes place against the backdrop of The Great Depression, and this affected the characters; Candy, Crooks, and Curley’s wife. The migrant workers never really stayed in one place long enough to have a permanent relationship with other people. Many of the characters admitted to suffering from loneliness that it affects the behaviors of the characters.

Crook is a black stable-hand. His name comes from the crooked background that he had when he was younger. In the story, Crooks admits that he is lonely. He tries to turn himself into a weapon to attack people who are weaker by using his words. Crooks plays a cruel game with Lennie, saying that George is gone for good when he went out. What Crooks wants most in this story is to have a sense of belonging, and to enjoy the right to play cards with the crew.

Candy is an old handyman who is aging and he is left with one hand from an accident. Candy is worried that his boss will call him useless and tell him to leave the ranch. For a short while during the story, he dreams of living out the rest of his life with George and Lennie on their dream farm. Candy sticks to the idea of having freedom or to set aside work as he chooses to. Candy also owns an older dog. Later in the story, Carlson, another ranch-hand, gets Candy to agree to let him shoot his dog out of its misery.

In this novella, Steinbeck treats women as if they are all troublemakers. Curley’s wife, who walks around the ranch as a seductress towards men. Her purpose is very little in the beginning, but throughout the story, she becomes more of an important character. Curley’s wife is typically known as the tramp or tart around the ranch. She seduces men into going with her because Curley does not give her much attention. During the novel when she confronts Lennie, Crooks, and Candy in the stable, she admits to feeling a shameless dissatisfaction with her life.

"Of Mice and Men" Loneliness. (2019, Sep 07). Retrieved from https://papersowl.com/examples/the-loneliness-in-of-mice-and-men/