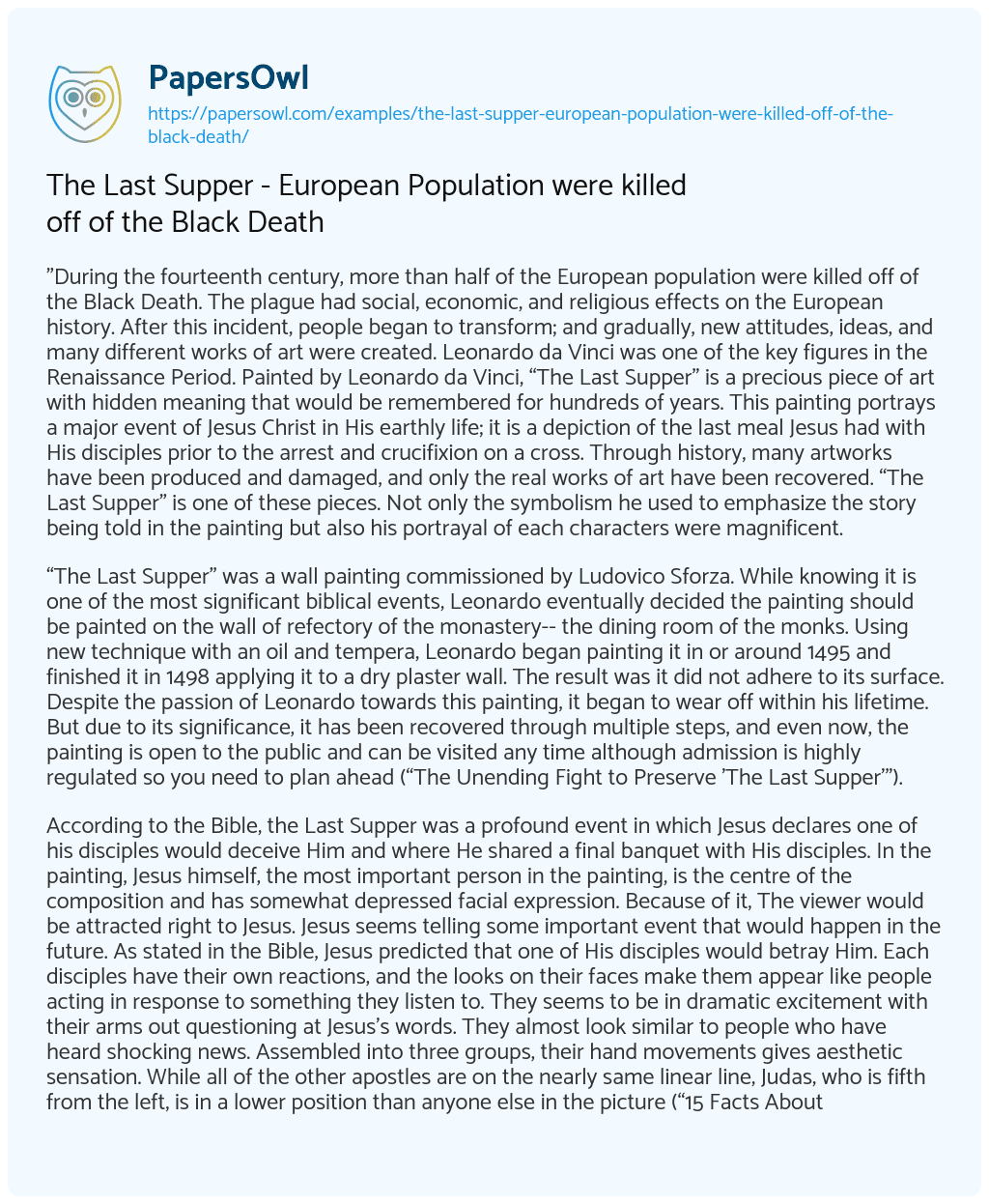 “During the fourteenth century, more than half of the European population were killed off of the Black Death. The plague had social, economic, and religious effects on the European history. After this incident, people began to transform; and gradually, new attitudes, ideas, and many different works of art were created. Leonardo da Vinci was one of the key figures in the Renaissance Period. Painted by Leonardo da Vinci, “The Last Supper” is a precious piece of art with hidden meaning that would be remembered for hundreds of years. This painting portrays a major event of Jesus Christ in His earthly life; it is a depiction of the last meal Jesus had with His disciples prior to the arrest and crucifixion on a cross. Through history, many artworks have been produced and damaged, and only the real works of art have been recovered. “The Last Supper” is one of these pieces. Not only the symbolism he used to emphasize the story being told in the painting but also his portrayal of each characters were magnificent.

“The Last Supper” was a wall painting commissioned by Ludovico Sforza. While knowing it is one of the most significant biblical events, Leonardo eventually decided the painting should be painted on the wall of refectory of the monastery– the dining room of the monks. Using new technique with an oil and tempera, Leonardo began painting it in or around 1495 and finished it in 1498 applying it to a dry plaster wall. The result was it did not adhere to its surface. Despite the passion of Leonardo towards this painting, it began to wear off within his lifetime. But due to its significance, it has been recovered through multiple steps, and even now, the painting is open to the public and can be visited any time although admission is highly regulated so you need to plan ahead (“The Unending Fight to Preserve ‘The Last Supper’”).

According to the Bible, the Last Supper was a profound event in which Jesus declares one of his disciples would deceive Him and where He shared a final banquet with His disciples. In the painting, Jesus himself, the most important person in the painting, is the centre of the composition and has somewhat depressed facial expression. Because of it, The viewer would be attracted right to Jesus. Jesus seems telling some important event that would happen in the future. As stated in the Bible, Jesus predicted that one of His disciples would betray Him. Each disciples have their own reactions, and the looks on their faces make them appear like people acting in response to something they listen to. They seems to be in dramatic excitement with their arms out questioning at Jesus’s words. They almost look similar to people who have heard shocking news. Assembled into three groups, their hand movements gives aesthetic sensation. While all of the other apostles are on the nearly same linear line, Judas, who is fifth from the left, is in a lower position than anyone else in the picture (“15 Facts About The Last Supper”). This implies that Judas is the one who would deceive Jesus.

In addition to portrayal of each disciples, Leonard used symbolism to convey his idea. In the painting, there are bread and wine, which were referred in the Bible as significant symbols. Jesus uses bread to symbolize his body and wine to symbolize his blood saying “Take, eat; this is my body which is broken for you; do this in remembrance of Me” and “This cup is the new covenant in My blood. This do, as often as you drink it, in remembrance of Me” (1 Corinthians 11:24-25). After praying and thanking God for the meal, he broke the bread and shared the wine to the apostles. This is where the tradition of communion comes from.

In conclusion, “The Last Supper” by Leonardo da Vinci is a remarkable work of art. He created this by the unique way using new technique. Since any people have worked to make it recovered for upcoming generations to see. Leonardo was an accomplished artist with his great success of the works like “The Last Supper.” With the great analysis of each disciples, Leonardo successfully convey his view of the event by depicting each other’s gestures distinctly. Also, symbolism used in the painting make this more significant.”

The Last Supper - European Population were killed off of the Black Death. (2021, Jun 26). Retrieved from https://papersowl.com/examples/the-last-supper-european-population-were-killed-off-of-the-black-death/