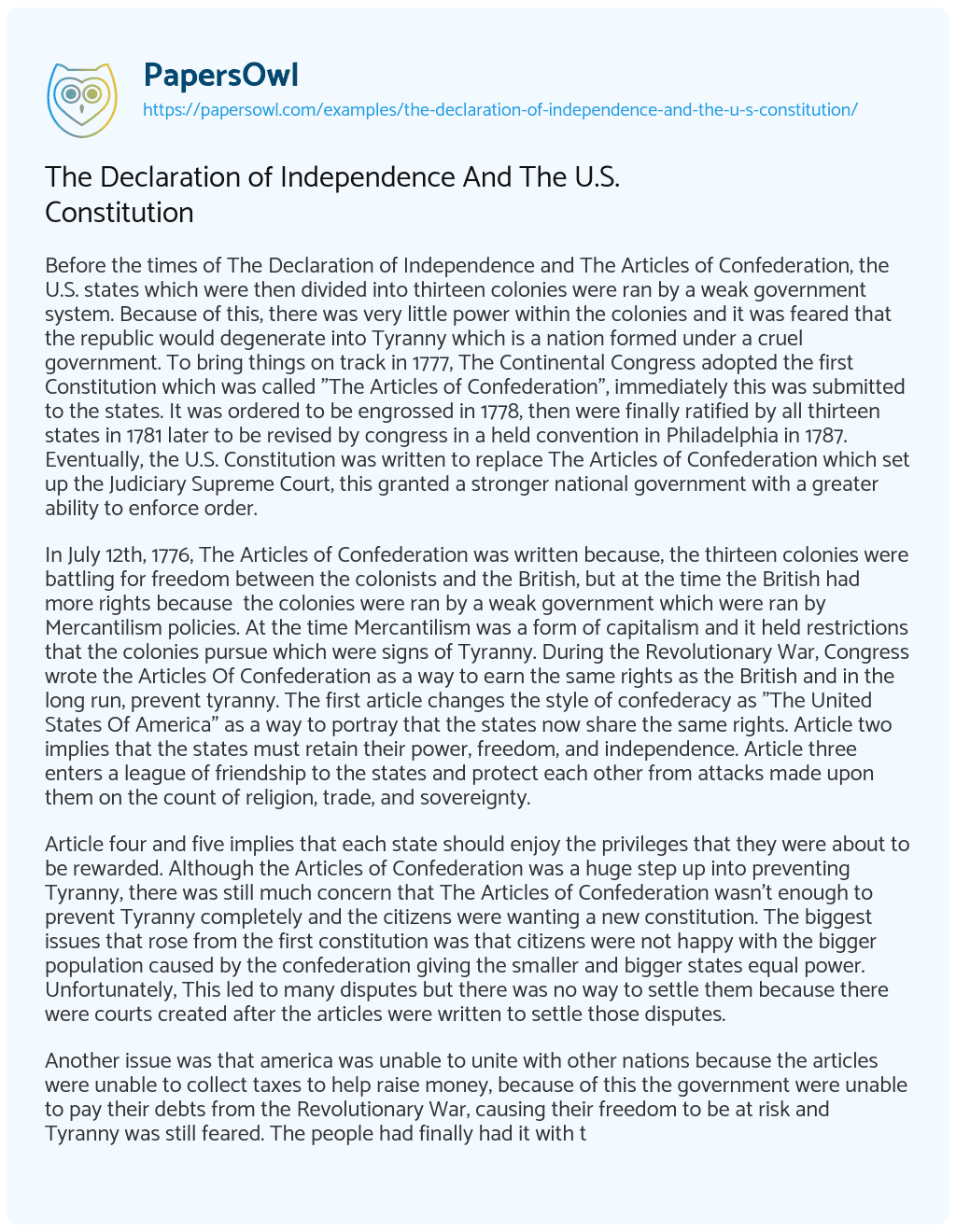 Before the times of The Declaration of Independence and The Articles of Confederation, the U.S. states which were then divided into thirteen colonies were ran by a weak government system. Because of this, there was very little power within the colonies and it was feared that the republic would degenerate into Tyranny which is a nation formed under a cruel government. To bring things on track in 1777, The Continental Congress adopted the first Constitution which was called “The Articles of Confederation”, immediately this was submitted to the states. It was ordered to be engrossed in 1778, then were finally ratified by all thirteen states in 1781 later to be revised by congress in a held convention in Philadelphia in 1787. Eventually, the U.S. Constitution was written to replace The Articles of Confederation which set up the Judiciary Supreme Court, this granted a stronger national government with a greater ability to enforce order.

In July 12th, 1776, The Articles of Confederation was written because, the thirteen colonies were battling for freedom between the colonists and the British, but at the time the British had more rights because  the colonies were ran by a weak government which were ran by Mercantilism policies. At the time Mercantilism was a form of capitalism and it held restrictions that the colonies pursue which were signs of Tyranny. During the Revolutionary War, Congress wrote the Articles Of Confederation as a way to earn the same rights as the British and in the long run, prevent tyranny. The first article changes the style of confederacy as “The United States Of America” as a way to portray that the states now share the same rights. Article two implies that the states must retain their power, freedom, and independence. Article three enters a league of friendship to the states and protect each other from attacks made upon them on the count of religion, trade, and sovereignty.

Article four and five implies that each state should enjoy the privileges that they were about to be rewarded. Although the Articles of Confederation was a huge step up into preventing Tyranny, there was still much concern that The Articles of Confederation wasn’t enough to prevent Tyranny completely and the citizens were wanting a new constitution. The biggest issues that rose from the first constitution was that citizens were not happy with the bigger population caused by the confederation giving the smaller and bigger states equal power. Unfortunately, This led to many disputes but there was no way to settle them because there were courts created after the articles were written to settle those disputes.

Another issue was that america was unable to unite with other nations because the articles were unable to collect taxes to help raise money, because of this the government were unable to pay their debts from the Revolutionary War, causing their freedom to be at risk and Tyranny was still feared. The people had finally had it with the government after a farmers rebellion which was a protest against excessive taxation and farmers land were being confiscated when they could not pay for their property tax. Because of the problems The Articles of Confederation was causing, the people wanted a stronger central government and something better than the articles to get behind. This led to The Constitutional Convention in Philadelphia in 1787 to settle the debate for a stronger government, leading to 1788 when the U.S. Constitution was ratified by the thirteen states and a new government too effect a year later when the U.S. senate met for the first time.

There was already a greater chance at preventing Tyranny because the writers of the constitution set up a system called “Federalism” which is a balance between the central government and the states, as well as a system for checks and balances. Things were going in the right direction to prevent Tyranny, but eventually it was almost guaranteed that the Constitution could guard against Tyranny when The Bill of Rights was added to the Constitution which listed the individual rights of citizens and privileges the rights of the first amendment. The individual rights of religion, speech, writing, and petition were privileged, which led to churched being established. Years after the events of The Revolutionary War and the birth of the U.S. Constitution, the concern of Tyranny had dwindled away due to freedom that became a reality and religious creativity had been freed.

The Declaration of Independence And The U.S. Constitution. (2020, Apr 14). Retrieved from https://papersowl.com/examples/the-declaration-of-independence-and-the-u-s-constitution/

Articles of Confederation and the Constitution