The Battle of Pearl Harbor 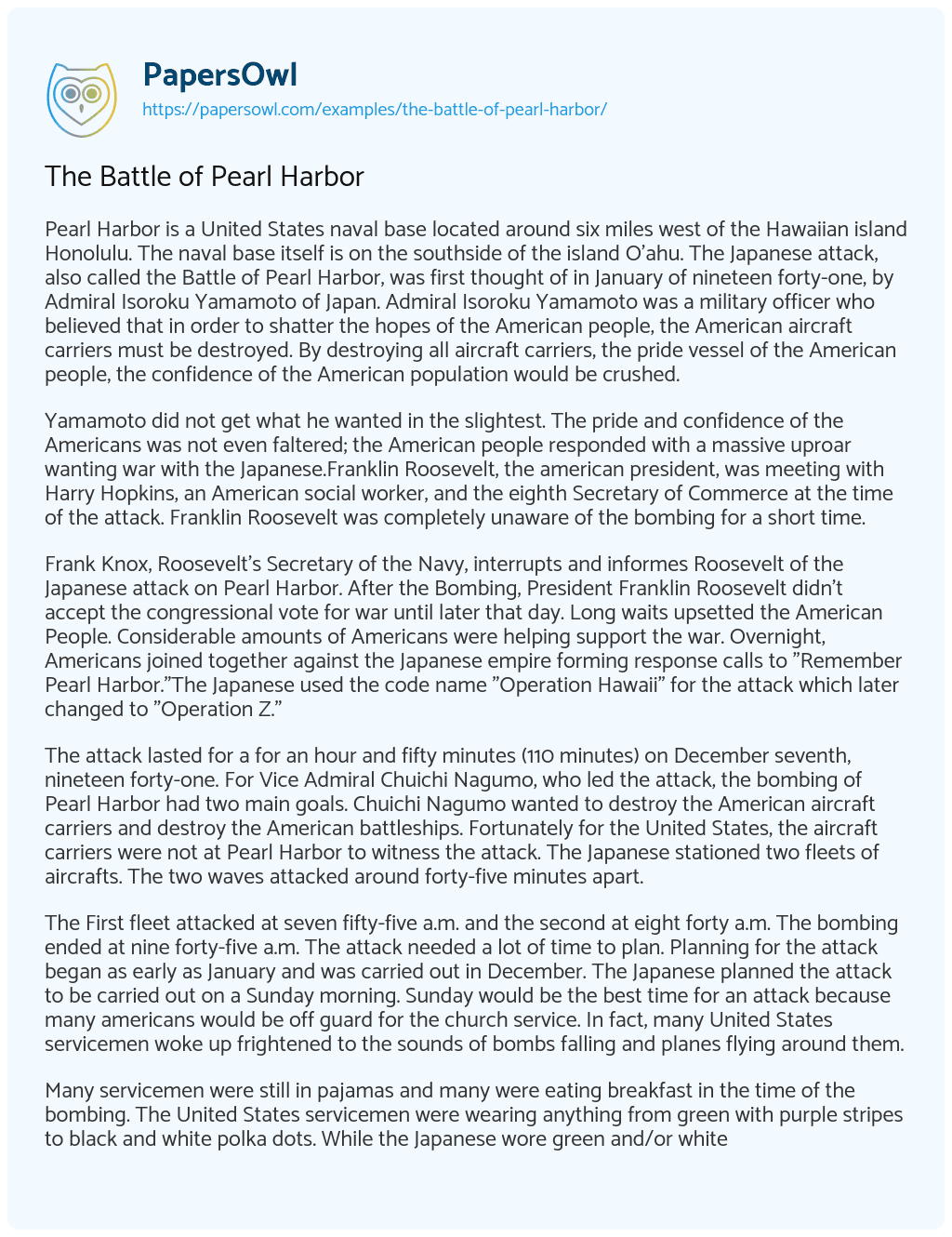 Pearl Harbor is a United States naval base located around six miles west of the Hawaiian island Honolulu. The naval base itself is on the southside of the island O’ahu. The Japanese attack, also called the Battle of Pearl Harbor, was first thought of in January of nineteen forty-one, by Admiral Isoroku Yamamoto of Japan. Admiral Isoroku Yamamoto was a military officer who believed that in order to shatter the hopes of the American people, the American aircraft carriers must be destroyed. By destroying all aircraft carriers, the pride vessel of the American people, the confidence of the American population would be crushed.

Yamamoto did not get what he wanted in the slightest. The pride and confidence of the Americans was not even faltered; the American people responded with a massive uproar wanting war with the Japanese.Franklin Roosevelt, the american president, was meeting with Harry Hopkins, an American social worker, and the eighth Secretary of Commerce at the time of the attack. Franklin Roosevelt was completely unaware of the bombing for a short time.

Frank Knox, Roosevelt’s Secretary of the Navy, interrupts and informes Roosevelt of the Japanese attack on Pearl Harbor. After the Bombing, President Franklin Roosevelt didn’t accept the congressional vote for war until later that day. Long waits upsetted the American People. Considerable amounts of Americans were helping support the war. Overnight, Americans joined together against the Japanese empire forming response calls to “Remember Pearl Harbor.”The Japanese used the code name “Operation Hawaii” for the attack which later changed to “Operation Z.”

The attack lasted for a for an hour and fifty minutes (110 minutes) on December seventh, nineteen forty-one. For Vice Admiral Chuichi Nagumo, who led the attack, the bombing of Pearl Harbor had two main goals. Chuichi Nagumo wanted to destroy the American aircraft carriers and destroy the American battleships. Fortunately for the United States, the aircraft carriers were not at Pearl Harbor to witness the attack. The Japanese stationed two fleets of aircrafts. The two waves attacked around forty-five minutes apart.

The First fleet attacked at seven fifty-five a.m. and the second at eight forty a.m. The bombing ended at nine forty-five a.m. The attack needed a lot of time to plan. Planning for the attack began as early as January and was carried out in December. The Japanese planned the attack to be carried out on a Sunday morning. Sunday would be the best time for an attack because many americans would be off guard for the church service. In fact, many United States servicemen woke up frightened to the sounds of bombs falling and planes flying around them.

Many servicemen were still in pajamas and many were eating breakfast in the time of the bombing. The United States servicemen were wearing anything from green with purple stripes to black and white polka dots. While the Japanese wore green and/or white uniforms.The Japanese trained for a year for this attack. Everything needs to be precise or “Operation Z” would fail. The Japanese servicemen were serious about the mission.

The Japanese airmen targeted the ammunition rooms in the ships to ensure the destruction of the ship. Ammunition rooms are highly explosive, and targeting them would cause a massive explosion causing the ship to collapse. Sometimes when an ammunition room gets breached, the explosions would be so bad the ships would turn completely upside down and sink. Eight battleships were stationed in Pearl Harbor. Eight battleships were in Battleship Row at the time of the attack seven stable and one ship mobile. “Battleship Row” is the formation of the United States Ships.

The attack stationed three-hundred and fifty-three Japanese aircrafts.The attack was not all aircrafts, however, there were also Japanese submarines that helped attack the battleships. All of the Japanese’s planes and submarines were labeled with their flag. The Japanese flag is white with a big, red circle and rays around it. The Flag is named the “Rising Sun Flag” When the flag did not have the sun rays around the circle, the United States servicemen called the big, red circle a meatball as a joke to cope with the stress.

The Battle of Pearl Harbor. (2019, Dec 11). Retrieved from https://papersowl.com/examples/the-battle-of-pearl-harbor/