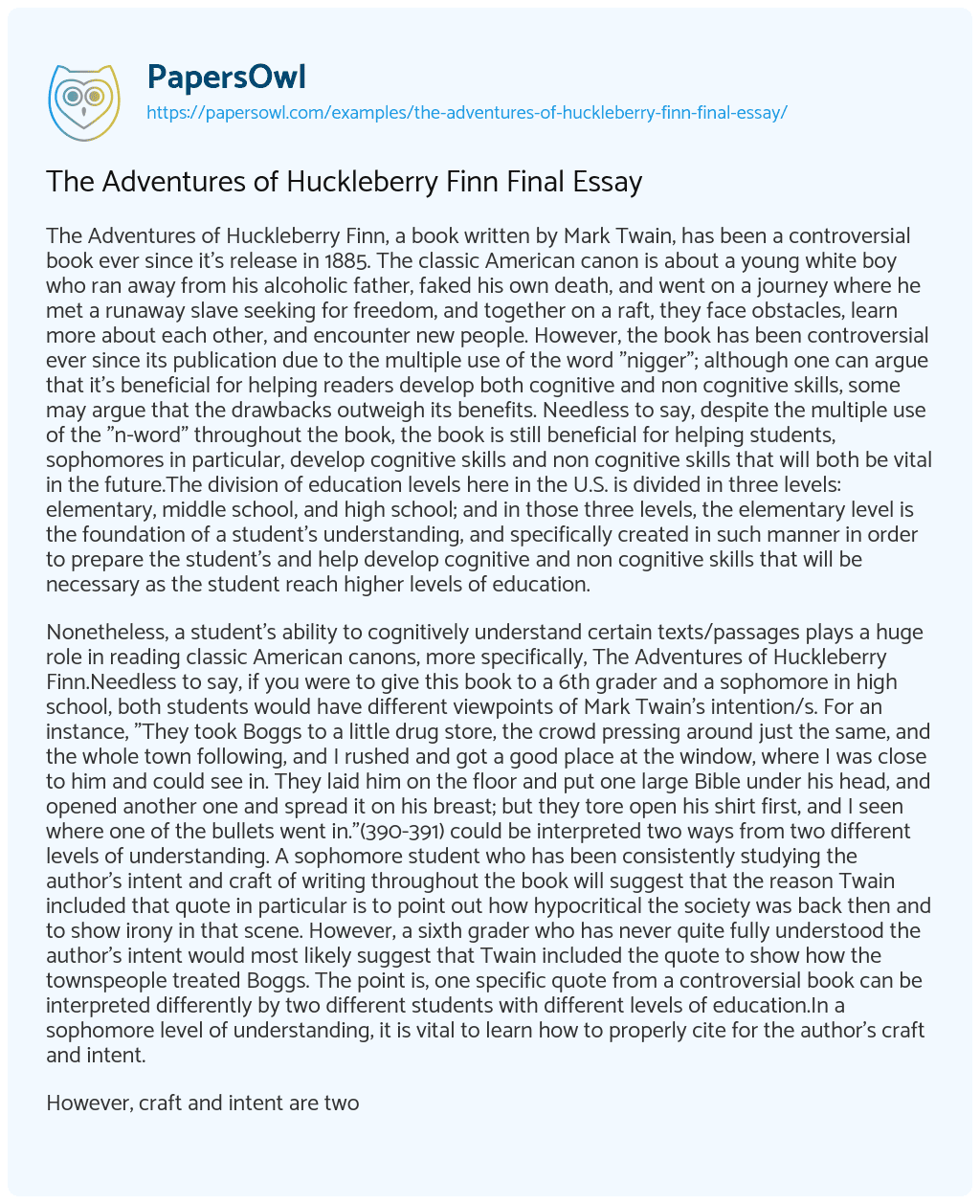 The Adventures of Huckleberry Finn, a book written by Mark Twain, has been a controversial book ever since it’s release in 1885. The classic American canon is about a young white boy who ran away from his alcoholic father, faked his own death, and went on a journey where he met a runaway slave seeking for freedom, and together on a raft, they face obstacles, learn more about each other, and encounter new people. However, the book has been controversial ever since its publication due to the multiple use of the word “nigger”; although one can argue that it’s beneficial for helping readers develop both cognitive and non cognitive skills, some may argue that the drawbacks outweigh its benefits. Needless to say, despite the multiple use of the “n-word” throughout the book, the book is still beneficial for helping students, sophomores in particular, develop cognitive skills and non cognitive skills that will both be vital in the future.The division of education levels here in the U.S. is divided in three levels: elementary, middle school, and high school; and in those three levels, the elementary level is the foundation of a student’s understanding, and specifically created in such manner in order to prepare the student’s and help develop cognitive and non cognitive skills that will be necessary as the student reach higher levels of education.

Nonetheless, a student’s ability to cognitively understand certain texts/passages plays a huge role in reading classic American canons, more specifically, The Adventures of Huckleberry Finn.Needless to say, if you were to give this book to a 6th grader and a sophomore in high school, both students would have different viewpoints of Mark Twain’s intention/s. For an instance, “They took Boggs to a little drug store, the crowd pressing around just the same, and the whole town following, and I rushed and got a good place at the window, where I was close to him and could see in. They laid him on the floor and put one large Bible under his head, and opened another one and spread it on his breast; but they tore open his shirt first, and I seen where one of the bullets went in.”(390-391) could be interpreted two ways from two different levels of understanding. A sophomore student who has been consistently studying the author’s intent and craft of writing throughout the book will suggest that the reason Twain included that quote in particular is to point out how hypocritical the society was back then and to show irony in that scene. However, a sixth grader who has never quite fully understood the author’s intent would most likely suggest that Twain included the quote to show how the townspeople treated Boggs. The point is, one specific quote from a controversial book can be interpreted differently by two different students with different levels of education.In a sophomore level of understanding, it is vital to learn how to properly cite for the author’s craft and intent.

However, craft and intent are two different things that are imperative for a student’s understanding of classic American literature. Learning how to properly cite and analyze the novel not only will the student benefit from fully understanding the text, but he/she will also have a better sense of understanding towards the intention behind the text. The content of the book is far more less vital than the craft and the intent. The intent is what determines a student’s cognitive skills. It takes full understanding of the text in order to properly and successfully pull out the intention of the author.Cognitive is a student’s activity of thinking/learning. The book would be most successful, in terms of understanding, if read in high school, because at that level, the students’ level of understanding is much more sophisticated than of elementary students. According to Lindsey Parnell,”His texts also have an undeniable sense of place rooted in the speech of his characters. The dialect, speech patterns, slang and syntax of the dialogue create a palpable experience for the reader”( Mark Twain and the shaping of American Literature) which advocates that students who read the book would have a better frame of reference of how life was like back then.Also, it is vital for students to read the book, because not only will it help them understand the author’s intentions throughout the book, but there are also an abundance of morals that can be pulled out of the text and be used in a daily basis.

For example, the book provides the reader a full insight of how perspectives change throughout the book. In the beginning of the novel, Huck only saw Jim as a slave who happened to be owned by one of his guardians. However, after Huck faked his death, he was able to spend quite some time with Jim, and got to know him better. “He was thinking about his wife and his children, away up yonder, and he was low and homesick; because he hadn’t ever been away from home before in his life; and I do believe he cared just as much for his people as white folks does for their’n.” (25.418-419) in this quote, Huck’s perspective towards Jim can be really seen, because he went from being ignorant and neglecting Jim to caring for him and understanding his reference of view.Although there are far more things that can be pulled out from the text to prove the benefits of teaching the book, there are also quite a lot of issues and drawbacks that come along with it. One example is the overuse of the word “nigger”.Throughout the novel, the author described African American slaves as “niggers”, and these days, the term is no longer use to label them; instead, it is in fact classified as an offensive or displeasing term. Due to the author’s overuse of the “n-word”, it has been a concern for teachers throughout the U.S.that the text is nothing but racist. However, one may argue that the author have purposely written the novel in such manner in order to show slavery from his perspective and the hypocritical society that the novel took place in, but the drawbacks outweighs its benefits in the eyes of teachers who disagree of requiring to teach the book.

Teachers across the country are hesitating to teach the book to the misuse of the “n-word”, which is what this society considers an offensive term for African Americans. According to Allison Flood, “The school’s principal told parents in a letter that “we have all come to the conclusion that the community costs of reading this book in 11th grade outweigh the literary benefits”, saying that some students had found the “use of the N-word” to be “challenging”, and that the school “was not being inclusive.”(US school stops teaching Huckleberry Finn because of ‘use of the N-word) which specifies that some schools across the country are banning the book due to its racist theme and lack of benefits. Also, according to Andrew Levy, ” Huck Finn was never meant to be a dusty classic palmed diffidently by teenagers between the hours of nine and three.” (6 Reasons ‘Huck Finn’ Is Not The Dusty Old Classic You Think It Is) which indicates that although it is classified as one of the classic American literatures, it was never meant to be a classic that is widely read by students throughout the world. However, despite the fact that the author uses the “n-word” numerous times throughout the book and the book not being considered a canon, it is still beneficial for the young adults’ understanding of slavery because slavery in the book was portrayed from the author’s point of view during the time it happened.

Likewise, the text itself is not racist due to the fact that slavery did happen, and the author intended nothing but to portray how slavery, hypocrisy, and society was back then; additionally, the use of the “n-word” is an essential piece of the story because, though it is classified as an offensive term, it portrays how society used the term in a regular basis, how African Americans were treated back then, and how the term changes throughout time.Teachers’ fear of the misuse of the “n-word” is not necessarily the problem , but the maturity of the readers itself. If the book is introduced to a group of young adults who are mature enough to handle the author’s content, intentions, and religious views, then there shouldn’t be a conflict while examining one of Twain’s greatest novels.Therefore, The Adventures of Huckleberry Finn, is beneficial for a sophomore student’s understanding of life and the revolving world around it, because the book incorporates bountiful life lessons,value of friendship, morals, perspectives, and it helps students understand that the book, despite its drawbacks, will help benefit them in the long run, by allowing them to expand their thinking process, vocabulary, and viewpoint on certain ideas and issues.

Why was “The Adventures of Huckleberry Finn” Banned?