Huckleberry Finn and Escaping the Clasps of Society 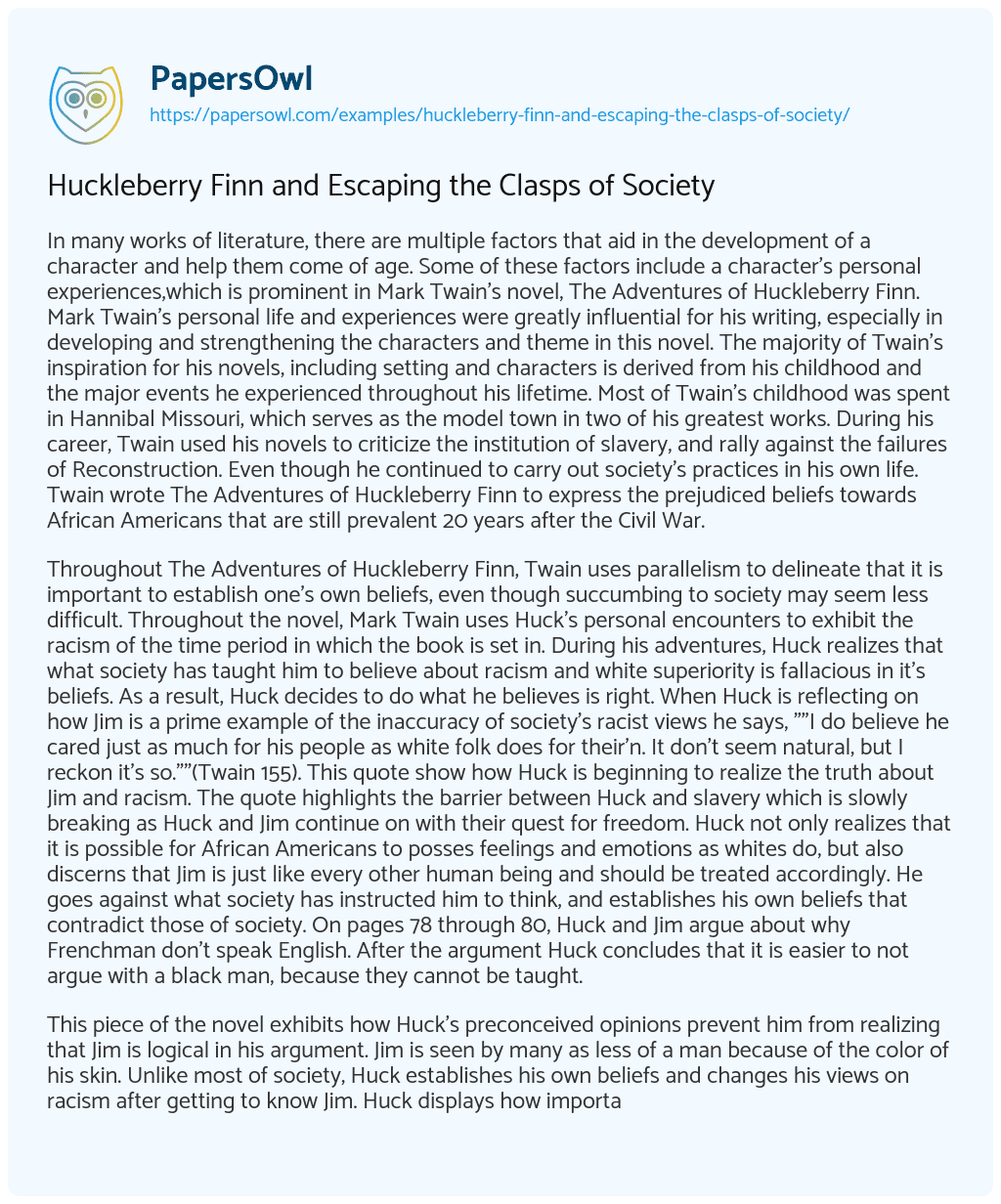 In many works of literature, there are multiple factors that aid in the development of a character and help them come of age. Some of these factors include a character’s personal experiences,which is prominent in Mark Twain’s novel, The Adventures of Huckleberry Finn. Mark Twain’s personal life and experiences were greatly influential for his writing, especially in developing and strengthening the characters and theme in this novel. The majority of Twain’s inspiration for his novels, including setting and characters is derived from his childhood and the major events he experienced throughout his lifetime. Most of Twain’s childhood was spent in Hannibal Missouri, which serves as the model town in two of his greatest works. During his career, Twain used his novels to criticize the institution of slavery, and rally against the failures of Reconstruction. Even though he continued to carry out society’s practices in his own life. Twain wrote The Adventures of Huckleberry Finn to express the prejudiced beliefs towards African Americans that are still prevalent 20 years after the Civil War.

Throughout The Adventures of Huckleberry Finn, Twain uses parallelism to delineate that it is important to establish one’s own beliefs, even though succumbing to society may seem less difficult. Throughout the novel, Mark Twain uses Huck’s personal encounters to exhibit the racism of the time period in which the book is set in. During his adventures, Huck realizes that what society has taught him to believe about racism and white superiority is fallacious in it’s beliefs. As a result, Huck decides to do what he believes is right. When Huck is reflecting on how Jim is a prime example of the inaccuracy of society’s racist views he says, “”I do believe he cared just as much for his people as white folk does for their’n. It don’t seem natural, but I reckon it’s so.””(Twain 155). This quote show how Huck is beginning to realize the truth about Jim and racism. The quote highlights the barrier between Huck and slavery which is slowly breaking as Huck and Jim continue on with their quest for freedom. Huck not only realizes that it is possible for African Americans to posses feelings and emotions as whites do, but also discerns that Jim is just like every other human being and should be treated accordingly. He goes against what society has instructed him to think, and establishes his own beliefs that contradict those of society. On pages 78 through 80, Huck and Jim argue about why Frenchman don’t speak English. After the argument Huck concludes that it is easier to not argue with a black man, because they cannot be taught.

This piece of the novel exhibits how Huck’s preconceived opinions prevent him from realizing that Jim is logical in his argument. Jim is seen by many as less of a man because of the color of his skin. Unlike most of society, Huck establishes his own beliefs and changes his views on racism after getting to know Jim. Huck displays how important Jim has become to him when he says, “”And for a starter I would go to work and steal Jim out of slavery again; and if I could think up anything worse, I would do that, too.”” (Twain 214). This quotation expresses how much Huck’s views of racism have changed for the better since he has met Jim. It also sheds light on Huck’s decision that his newly formed relationship with Jim is more important to him than the societal regards toward slavery. Huck has not only grown close with Jim but has also rejected almost all of society’s teachings to save and free Jim. Huck decides to follow his moral compass rather than society’s judgement. Throughout his adventures Huck develops a friendship with Jim which he realizes cannot be overthrown and consumed by society’s views. When being civilized Huck feels trapped and decides to seclude himself from society’s grasps entirely. On page 1 it states, “”The Widow Douglas, she took me for her son, and she allowed she would sivilize me; but it was rough living in the house all the time, […] and so when I couldn’t stand it no longer. I lit out.”” Huck relays that he does not want to conform to society’s ideas and teachings. He wants to break away from the strict teachings of civilization and decides the only way to stay free is to go to a place where society cannot reach him.

Huck’s main hunt for freedom is to simply to find happiness again, away from the binds of society. For Huck, the home was a jail and created a confining lifestyle for him, and is the complete opposite of his personality, which is adventurous. On page 293 it states, “”But I reckon I got to light out for the Territory ahead of the rest, because Aunt Sally, she’s going to adopt me and sivilize me and I can’t stand it. I been there before.”” This quote shows that after his adventures his views on the necessity of being civilized have not changed since the beginning of the novel. Huck, knowing the conflicts he faced growing up in a civilized home, makes the decision to go his own direction into new territory. He finds his primary source of happiness to be freedom in which he never fully acquires. In a criticism by Bennett Kravitz it is emphasized that, “”From the very beginning, Huck’s quest to “”light out”” into the new will be determined by his attachment to the old.”” By stating this, Bennet is describing that Huck must first jettison his connection to his past and look ahead to the future. On page 24 it states,””It was kind of lazy and jolly, layer off comfortable all day, smoking and fishing, and no books nor study. [..] It was good times up in the woods there, take it all around.”” This quote supports how Huck feels about society and nature. He would rather be surrounded by nature than be trapped in society’s grasp. Huck finds freedom in nature but feels like a prisoner to civilization.

Huck chooses to follow his judgement of right versus wrong instead of complying to society, he does not realize that his own instincts are honorable in respect to the instincts forced upon him by society. On page 87 it states, “”Well, I can tell you it made me all over trembly and feverish too, to hear him, because I begun to get it through my head that he was most free- and who was to blame for it?”” This quote emphasizes Huck’s internal battle of whether he should help a runaway slave or turn him [Jim] in for running away. There are points in the novel where Huck questions everything he has done and even writes a letter to Miss Watson saying he knows where her runaway slave is. Although he writes the letter, he never actually sends it because he rips it up. In doing so he chooses friendship over society’s teachings even though it would have been easier in to surrender to society. On page 86 it states,””It was fifteen minutes before I could work myself up to go and humble myself to a nigger; but I done it, and I warn’t ever sorry for it afterwards neither.””

This quote accents Huck’s character development and growth of his views. Huck opposes everything society has trained him to believe about African Americans in order to apologize to Jim. In doing so Huck decides to do what he feels is right, even if it takes him quite some time to differentiate between his own beliefs and society’s. In a literary criticism composed by Tuire Valkeakari it says, “”Huck, in turn””despite his apparent freedom””is confined by various white conventions of antebellum life, especially by his society’s axiomatic assumptions of white superiority and black inferiority.”” This quote explains how even though Huck seems to be free when on his adventures with Jim, he is enticed by society’s beliefs and vacillates between surrendering to society or establishing his own beliefs. Huck realizes that the only way for him to ever be free is to let go of the past and construct his future. Despite society’s views on Huck and Jim’s association, Jim feels that he can confide in Huck. When Jim realizes how much of a friend Huck has become, he says, “”Dah you goes, de ole true Huck; de on’y white genlman dat ever kep’ his promise to ole Jim.”” (Twain 89) This quote reveals how Jim feels about Huck; he not only views Huck as a friend but confirms that Huck as the only white man that could keep his promises to Jim.

Huck acts more honorable when free in nature and is not confined by society. All he desires in his life is to be free to make his own decisions. He not only craves freedom, but also wants make up his own mind, live by his own standards, and be free of any restraints. In the end of the novel, Huck not only breaks free of society’s clutch, but learns to think for himself and initiate his own beliefs. He discovers the truth about racism and blacks, and resolves that the right thing to do is to help someone in need [Jim]. In doing so he goes against everything that society has compelled him to believe, and deciphers that the majority of society’s teachings were false in their views. Huck discovers the true goals of society and decides that they go against what he wants to believe, and how he wants to carry out his life.

Huckleberry Finn and Escaping the Clasps of Society. (2019, Dec 14). Retrieved from https://papersowl.com/examples/huckleberry-finn-and-escaping-the-clasps-of-society/