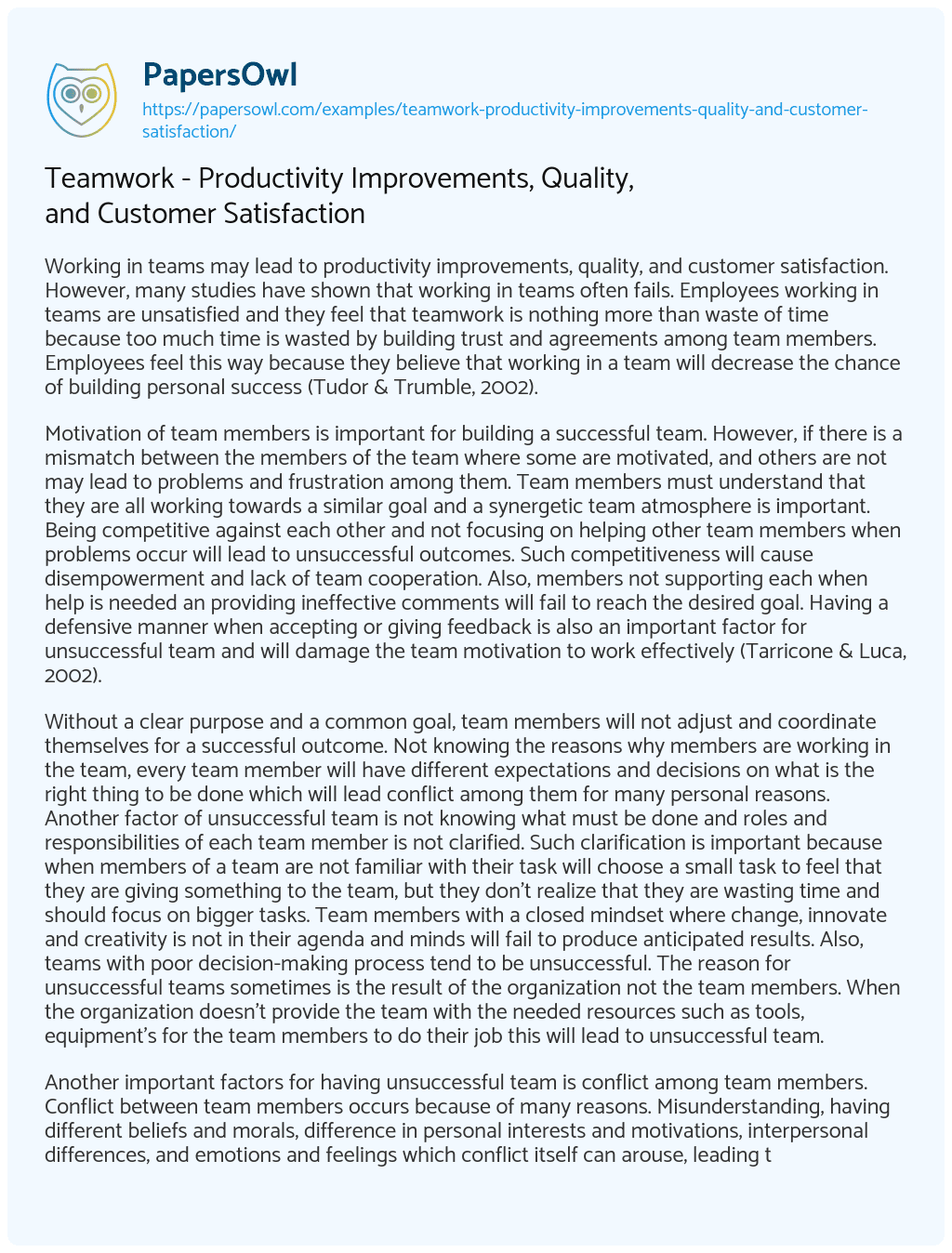 Motivation of team members is important for building a successful team. However, if there is a mismatch between the members of the team where some are motivated, and others are not may lead to problems and frustration among them. Team members must understand that they are all working towards a similar goal and a synergetic team atmosphere is important. Being competitive against each other and not focusing on helping other team members when problems occur will lead to unsuccessful outcomes. Such competitiveness will cause disempowerment and lack of team cooperation. Also, members not supporting each when help is needed an providing ineffective comments will fail to reach the desired goal. Having a defensive manner when accepting or giving feedback is also an important factor for unsuccessful team and will damage the team motivation to work effectively (Tarricone & Luca, 2002).

Without a clear purpose and a common goal, team members will not adjust and coordinate themselves for a successful outcome. Not knowing the reasons why members are working in the team, every team member will have different expectations and decisions on what is the right thing to be done which will lead conflict among them for many personal reasons. Another factor of unsuccessful team is not knowing what must be done and roles and responsibilities of each team member is not clarified. Such clarification is important because when members of a team are not familiar with their task will choose a small task to feel that they are giving something to the team, but they don’t realize that they are wasting time and should focus on bigger tasks. Team members with a closed mindset where change, innovate and creativity is not in their agenda and minds will fail to produce anticipated results. Also, teams with poor decision-making process tend to be unsuccessful. The reason for unsuccessful teams sometimes is the result of the organization not the team members. When the organization doesn’t provide the team with the needed resources such as tools, equipment’s for the team members to do their job this will lead to unsuccessful team.

Another important factors for having unsuccessful team is conflict among team members. Conflict between team members occurs because of many reasons. Misunderstanding, having different beliefs and morals, difference in personal interests and motivations, interpersonal differences, and emotions and feelings which conflict itself can arouse, leading to more conflict (The Open University, 2011).

Managers who face conflict within the team and know how to manage this conflict will be more likely to have an effective team. As mentioned, conflict arises from many different reasons, but the way managers manage the conflict is important. It’s important for managers to make the outcome of a conflict to be a win-win situation. However, such situation involves open discussions and fair decision-making. The behavior of the team members is an important factor in resolving the conflict. There are three choices managers could take when conflict happens, ignore it, prevent it from happening, or to resolve it. Not intervening sometimes succeed, however, sometimes the problem gets bigger and not intervene could make the conflict worse. When a manager cultivates a culture where both parties reach to a win-win solution, most conflict will be prevented. Conflict prevention occurs when creating common goals, reassign responsibilities when needed and improving communication by having a supportive team atmosphere where arguments and questioning are welcomed. Resolving a conflict is when managers intervene to find a solution for the conflict. Managers must allow team members to explain what they feel and inspire them to put their conflict in perspective. Another way is to negotiate with the members who are having a conflict by bringing them together and look for a solution where both parties agrees to a solution than benefit them all (The Open University, 2011).

“”To build effective project teams and to maintain the necessary teamwork, a project leader must understand the aspects of team leadership and the crucial skills of team members”” (Matthews & McLees, 2015). Building an effective team, requires a strong manager to help team members through reaching the goal desired. If the leader wants to have an effective team, it requires the development of credibility and maintaining it. The belief of the manager in the goals and purpose the team members are working on will motivate them to work effectively on be on track even if problems emerged (Matthews & McLees, 2015). To have an effective team, team managers should provide continuous attention and monitoring the teams. They should motivate and support their team members by making the team understand the objectives of the organization or the project their working on, clarifying the roles and responsibilities for each member, interdependence, and building trust and positive working environment and such attributes will lead to an effective successful team (Sohmen, 2013). Communication is also important in building an effective team. Managers who gives and receive feedback in a respectful manner will encourage team members to feel as a strong system which will reflect on their positive outcomes. Also, managers can benefit from information that is provided from the teammates. There is no know it all managers, everyone in the team can gain knowledge from each other, that why its important to have a diverse team with different talents and knowledge. Building a strong relationship among team members is another important aspect manager should consider, and always try to reverse negative feedback into positive. Managers should not only focus on criticizing team members, giving positive feedback will encourage team members to be confident. Asking help when needed from team members and admitting if a mistake had happened will make the members of the team feel relaxed to talk to the manager without being scared or feeling worried and stressed. Managers should gain the respect of team members by doing what he asks the team members to do, and always support the team members.

What is Teamwork and Team?