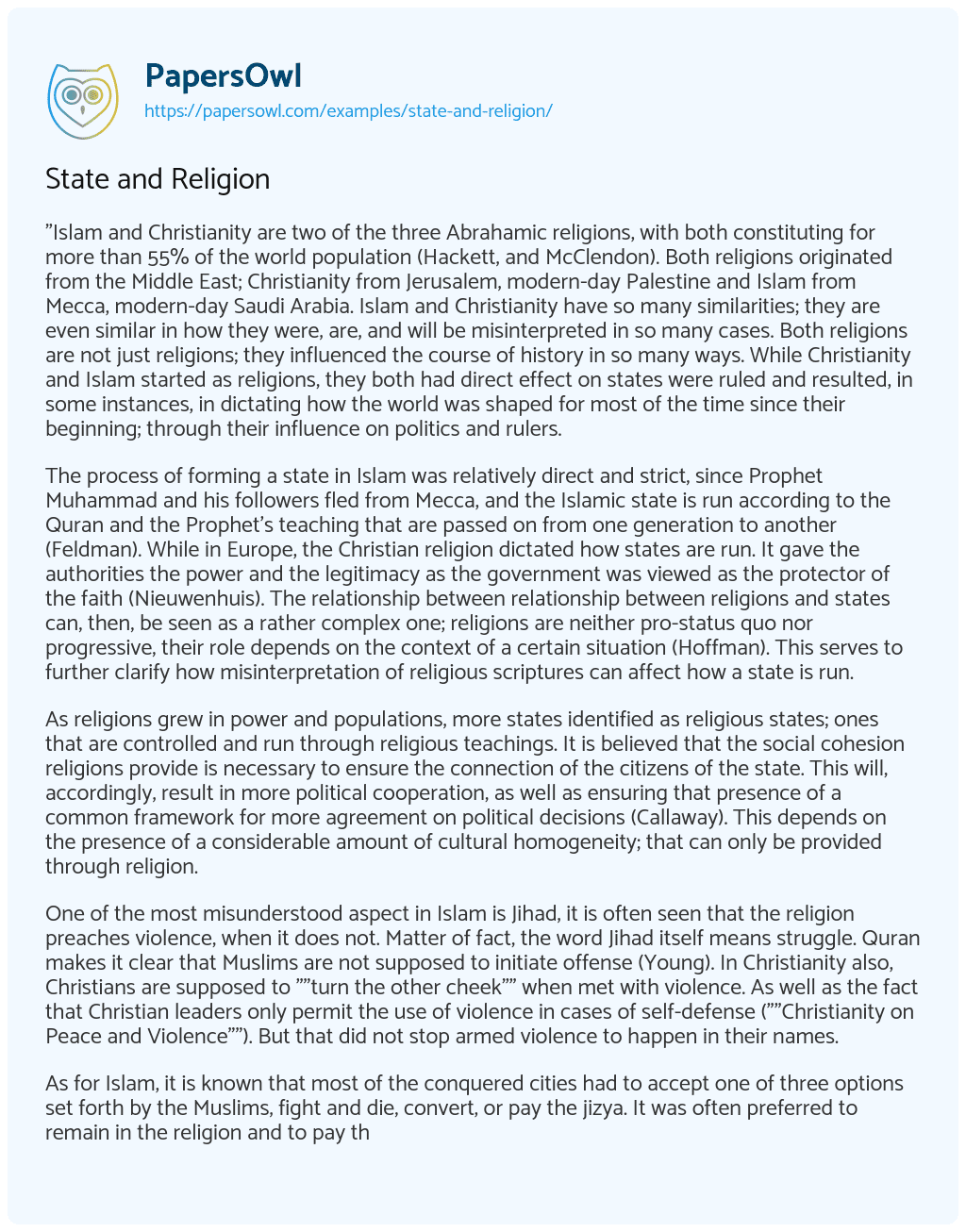 “Islam and Christianity are two of the three Abrahamic religions, with both constituting for more than 55% of the world population (Hackett, and McClendon). Both religions originated from the Middle East; Christianity from Jerusalem, modern-day Palestine and Islam from Mecca, modern-day Saudi Arabia. Islam and Christianity have so many similarities; they are even similar in how they were, are, and will be misinterpreted in so many cases. Both religions are not just religions; they influenced the course of history in so many ways. While Christianity and Islam started as religions, they both had direct effect on states were ruled and resulted, in some instances, in dictating how the world was shaped for most of the time since their beginning; through their influence on politics and rulers.

The process of forming a state in Islam was relatively direct and strict, since Prophet Muhammad and his followers fled from Mecca, and the Islamic state is run according to the Quran and the Prophet’s teaching that are passed on from one generation to another (Feldman). While in Europe, the Christian religion dictated how states are run. It gave the authorities the power and the legitimacy as the government was viewed as the protector of the faith (Nieuwenhuis). The relationship between relationship between religions and states can, then, be seen as a rather complex one; religions are neither pro-status quo nor progressive, their role depends on the context of a certain situation (Hoffman). This serves to further clarify how misinterpretation of religious scriptures can affect how a state is run.

As religions grew in power and populations, more states identified as religious states; ones that are controlled and run through religious teachings. It is believed that the social cohesion religions provide is necessary to ensure the connection of the citizens of the state. This will, accordingly, result in more political cooperation, as well as ensuring that presence of a common framework for more agreement on political decisions (Callaway). This depends on the presence of a considerable amount of cultural homogeneity; that can only be provided through religion.

One of the most misunderstood aspect in Islam is Jihad, it is often seen that the religion preaches violence, when it does not. Matter of fact, the word Jihad itself means struggle. Quran makes it clear that Muslims are not supposed to initiate offense (Young). In Christianity also, Christians are supposed to “”turn the other cheek”” when met with violence. As well as the fact that Christian leaders only permit the use of violence in cases of self-defense (“”Christianity on Peace and Violence””). But that did not stop armed violence to happen in their names.

As for Islam, it is known that most of the conquered cities had to accept one of three options set forth by the Muslims, fight and die, convert, or pay the jizya. It was often preferred to remain in the religion and to pay the jizya (Arlandson). Christian crusades as well resulted in violence and bloodshed in the eastern mediterranean area known as the Holy Land (“”The Crusades””). It can easily be said that one of the things that make religions inclusive causes violence that occur in their names; interpretation and how open holy books are to it.

In Islam, a leader is a person with the strongest faith and the wisest. A Muslim ruler is governed and governs according to God’s law, he should promote the actions God require and ban whatever is prohibited by God (Feldman). But in no way was a Muslim ruler a representative of God. While in Christianity, a religious body is the only place for practicing religion, a church is supported by funds from the state, with the church having ultimate influence on the policies of a state (Callaway). Hence, in Christianity a ruler, if accepted by the church, is a representative of God’s will.

In many aspects, monotheistic religions provided union and stability of the states, and sociopolitical stability is one very important aspect the religions covered. They personalized the experience one has with the one deity, with the experience continuing even after death, making individuals more responsible and aware of their doings. They as well prevented the political monopoly of different parties being in power, and instead making all power in the hand of God in a sense (Iyigun). All of this resulted in more stability within the communities, given the scriptures are not misinterpreted.

Religion is a source of hope; it makes humans go through hardships expecting a reward. It stems from and affects spiritualities of all humans. It helps in creating a bond with a higher entity, one that can offer comfort and hope. With the religions’ influence on the states, relations, and legitimacy provided to rulers, they present themselves as the major forces of power. The Muslim world differed from Christian world in the rulers’ power and where they are derived from, but they had basically the same stance when it comes to the prohibition of armed violence. Although religions in general, and Christianity and Islam in particular, differ in many aspects, they have the same core values, which are peace and prosperity.”