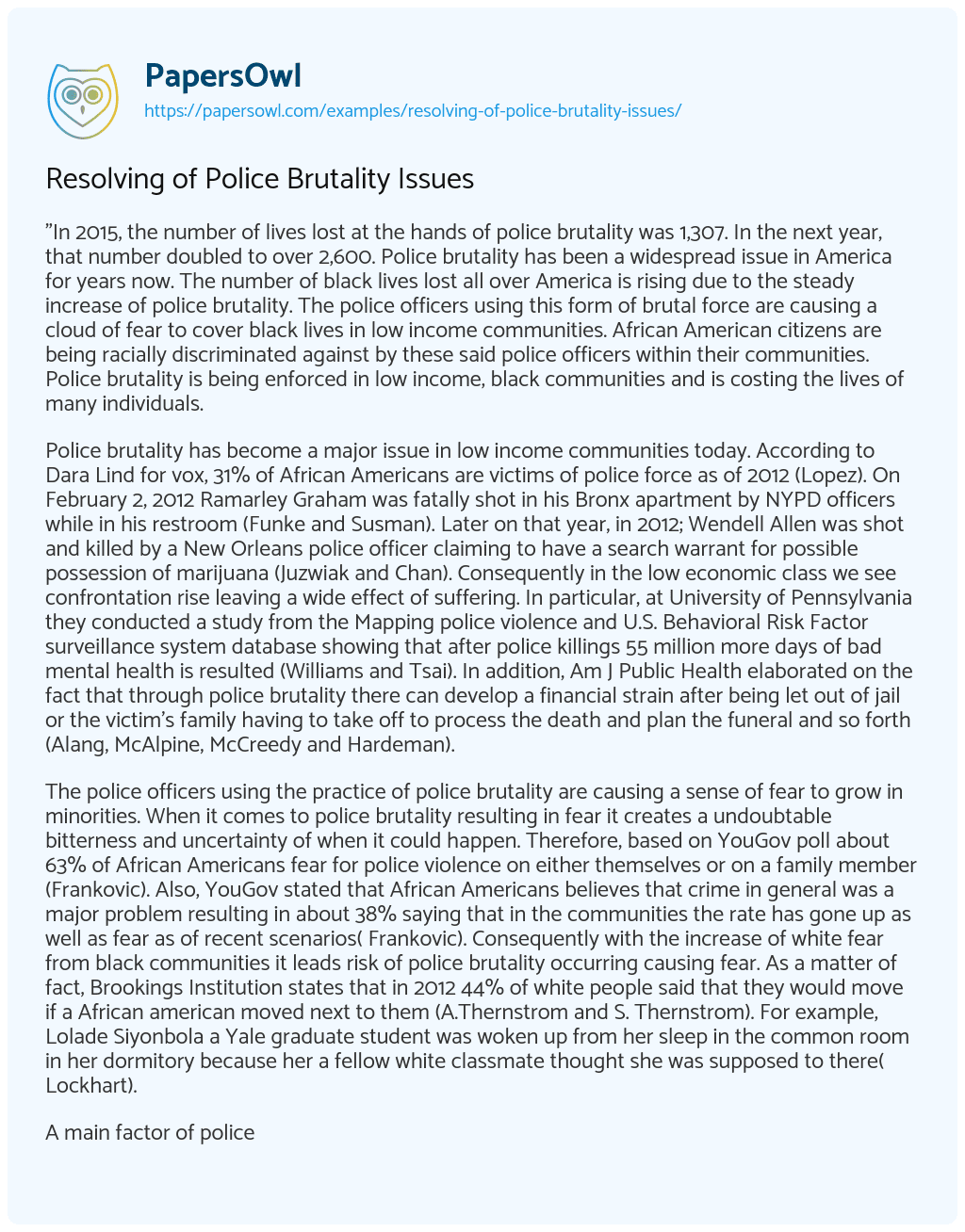 “In 2015, the number of lives lost at the hands of police brutality was 1,307. In the next year, that number doubled to over 2,600. Police brutality has been a widespread issue in America for years now. The number of black lives lost all over America is rising due to the steady increase of police brutality. The police officers using this form of brutal force are causing a cloud of fear to cover black lives in low income communities. African American citizens are being racially discriminated against by these said police officers within their communities. Police brutality is being enforced in low income, black communities and is costing the lives of many individuals.

Police brutality has become a major issue in low income communities today. According to Dara Lind for vox, 31% of African Americans are victims of police force as of 2012 (Lopez). On February 2, 2012 Ramarley Graham was fatally shot in his Bronx apartment by NYPD officers while in his restroom (Funke and Susman). Later on that year, in 2012; Wendell Allen was shot and killed by a New Orleans police officer claiming to have a search warrant for possible possession of marijuana (Juzwiak and Chan). Consequently in the low economic class we see confrontation rise leaving a wide effect of suffering. In particular, at University of Pennsylvania they conducted a study from the Mapping police violence and U.S. Behavioral Risk Factor surveillance system database showing that after police killings 55 million more days of bad mental health is resulted (Williams and Tsai). In addition, Am J Public Health elaborated on the fact that through police brutality there can develop a financial strain after being let out of jail or the victim’s family having to take off to process the death and plan the funeral and so forth (Alang, McAlpine, McCreedy and Hardeman).

The police officers using the practice of police brutality are causing a sense of fear to grow in minorities. When it comes to police brutality resulting in fear it creates a undoubtable bitterness and uncertainty of when it could happen. Therefore, based on YouGov poll about 63% of African Americans fear for police violence on either themselves or on a family member (Frankovic). Also, YouGov stated that African Americans believes that crime in general was a major problem resulting in about 38% saying that in the communities the rate has gone up as well as fear as of recent scenarios( Frankovic). Consequently with the increase of white fear from black communities it leads risk of police brutality occurring causing fear. As a matter of fact, Brookings Institution states that in 2012 44% of white people said that they would move if a African american moved next to them (A.Thernstrom and S. Thernstrom). For example, Lolade Siyonbola a Yale graduate student was woken up from her sleep in the common room in her dormitory because her a fellow white classmate thought she was supposed to there( Lockhart).

A main factor of police brutality is racial profiling towards minorities in low income communities. Obviously racial profiling is based on the lack of police officers looking like a African American leading to police brutality to occur more often. According to the evidence found at National Bureau of Economic research they say that a well experienced white officer is more likely to pull over a African American due to a possible suspension of illegal activity ( Antonovics and knight). With all things considered,National Bureau of Economic research says “black motorists is searched is .81% if the officer is black but 1.0% if the officer is white.”(Antonovics and knight). Apart from just the color there is a spike for statistical discrimination leading to more incidents of police brutality. Due to the National Bureau of Economic research they conducted a table explaining how just because of stats basing off of African Americans illegal deals they automatically think that they could hold contraband making them more likely to be pulled over or searched without a warrant(Antonovics and knight). Research has found that 84% of police stops are resulting with African american s, them believing that they have contraband and the rest is white(Coviello and Persico).