The Impact of Police Brutality 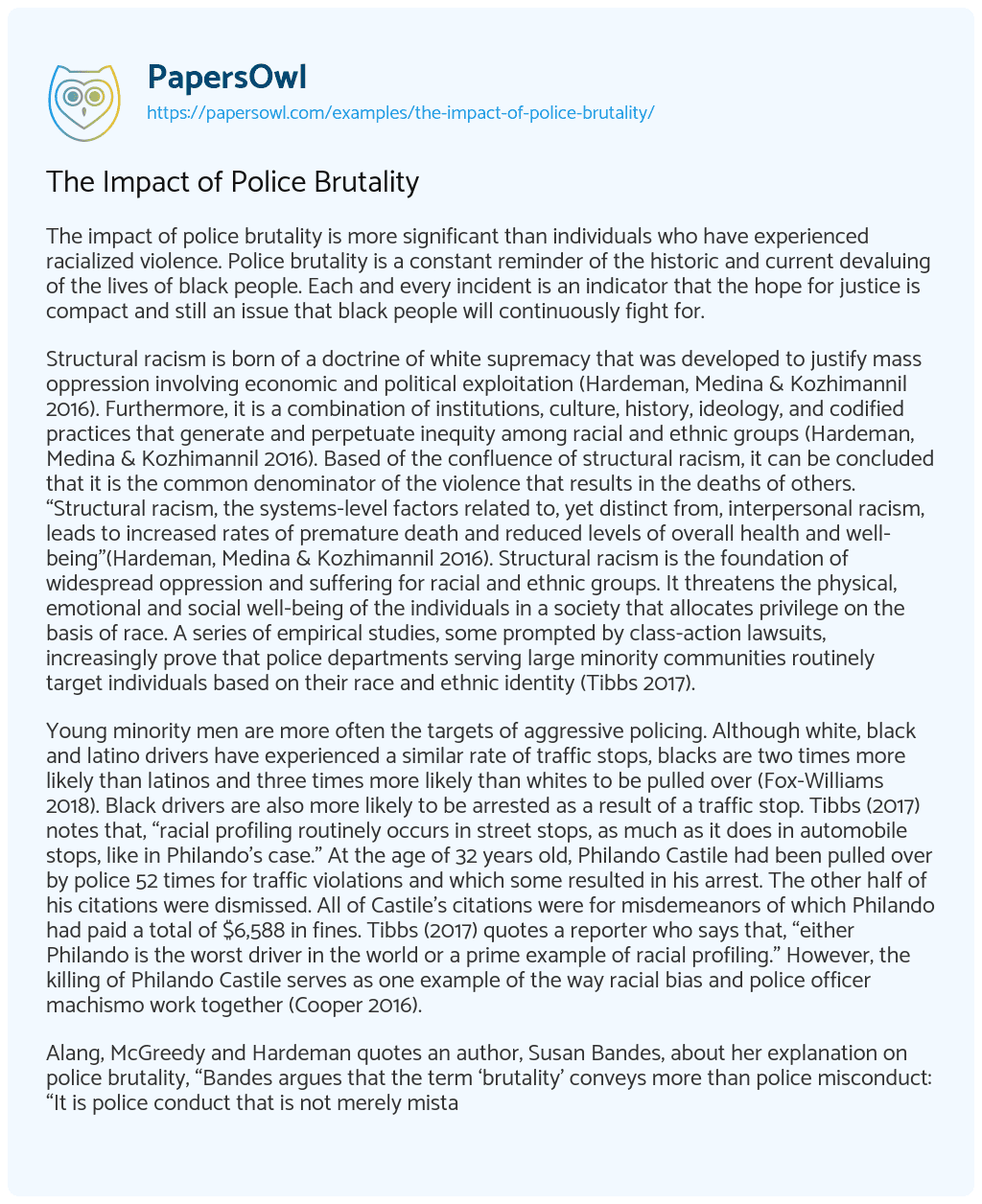 The impact of police brutality is more significant than individuals who have experienced racialized violence. Police brutality is a constant reminder of the historic and current devaluing of the lives of black people. Each and every incident is an indicator that the hope for justice is compact and still an issue that black people will continuously fight for.

Structural racism is born of a doctrine of white supremacy that was developed to justify mass oppression involving economic and political exploitation (Hardeman, Medina & Kozhimannil 2016). Furthermore, it is a combination of institutions, culture, history, ideology, and codified practices that generate and perpetuate inequity among racial and ethnic groups (Hardeman, Medina & Kozhimannil 2016). Based of the confluence of structural racism, it can be concluded that it is the common denominator of the violence that results in the deaths of others. “Structural racism, the systems-level factors related to, yet distinct from, interpersonal racism, leads to increased rates of premature death and reduced levels of overall health and well-being”(Hardeman, Medina & Kozhimannil 2016). Structural racism is the foundation of widespread oppression and suffering for racial and ethnic groups. It threatens the physical, emotional and social well-being of the individuals in a society that allocates privilege on the basis of race. A series of empirical studies, some prompted by class-action lawsuits, increasingly prove that police departments serving large minority communities routinely target individuals based on their race and ethnic identity (Tibbs 2017).

Young minority men are more often the targets of aggressive policing. Although white, black and latino drivers have experienced a similar rate of traffic stops, blacks are two times more likely than latinos and three times more likely than whites to be pulled over (Fox-Williams 2018). Black drivers are also more likely to be arrested as a result of a traffic stop. Tibbs (2017) notes that, “racial profiling routinely occurs in street stops, as much as it does in automobile stops, like in Philando’s case.” At the age of 32 years old, Philando Castile had been pulled over by police 52 times for traffic violations and which some resulted in his arrest. The other half of his citations were dismissed. All of Castile’s citations were for misdemeanors of which Philando had paid a total of $6,588 in fines. Tibbs (2017) quotes a reporter who says that, “either Philando is the worst driver in the world or a prime example of racial profiling.” However, the killing of Philando Castile serves as one example of the way racial bias and police officer machismo work together (Cooper 2016).

Alang, McGreedy and Hardeman quotes an author, Susan Bandes, about her explanation on police brutality, “Bandes argues that the term ‘brutality’ conveys more than police misconduct: “It is police conduct that is not merely mistaken, but taken in bad faith, with the intent to dehumanize and degrade its target”. However, it can be argued that police actions that constitute brutality and that dehumanize and degrade occur even in the absence of conscious intent (Alang, McGreedy & Hardeman 2017). Each episode of police brutality has emotional and physiological effects on individuals and communities along with physical effects, “Witnessing or experiencing harassment, routine unwarranted searches, and deaths that go unpunished send a message to Black communities that their bodies are police property, disposable, and undeserving of dignity and justice” (Alang, McGreedy & Hardeman 2017).

Blacks are significantly more likely to experience police brutality than are whites. Beer analyzes a figure in his article that “shows that blacks made up around a quarter of all those killed by police in 2015, 2016, and 2017.” But according to the most recent U.S. Census, blacks constitute only 13% of the U.S. population. More black people are being killed at the hands of officers than the number of black people that exist in the U.S. In the case of Philando Castile, the complication of conceal and carry laws resulted in the use of lethal force outside of the lack of cooperation. If an officer encounters an individual with a gun, it is considered high risk. However, it is evident that police in the U.S. need far more training and protocols to avoid killing an individual who may have a weapon, whether it is a gun or not (Beer 2018). Castile’s family claimed he was profiled because of his race, and the shooting renewed concerns about how police officers interact with minorities (Karnowski & Forliti 2017). Officer Yanez, who is Latino, testified in court that Castile was pulling his gun out of his pocket after Yanez commanded Castile not to do so. However, witnesses also testified that the gun was in the pocket of Castile’s shorts when paramedics removed him from his vehicle, not that it was already pulled out or being pulled out as Yanez claims.

The Impact of Police Brutality. (2020, Dec 15). Retrieved from https://papersowl.com/examples/the-impact-of-police-brutality/