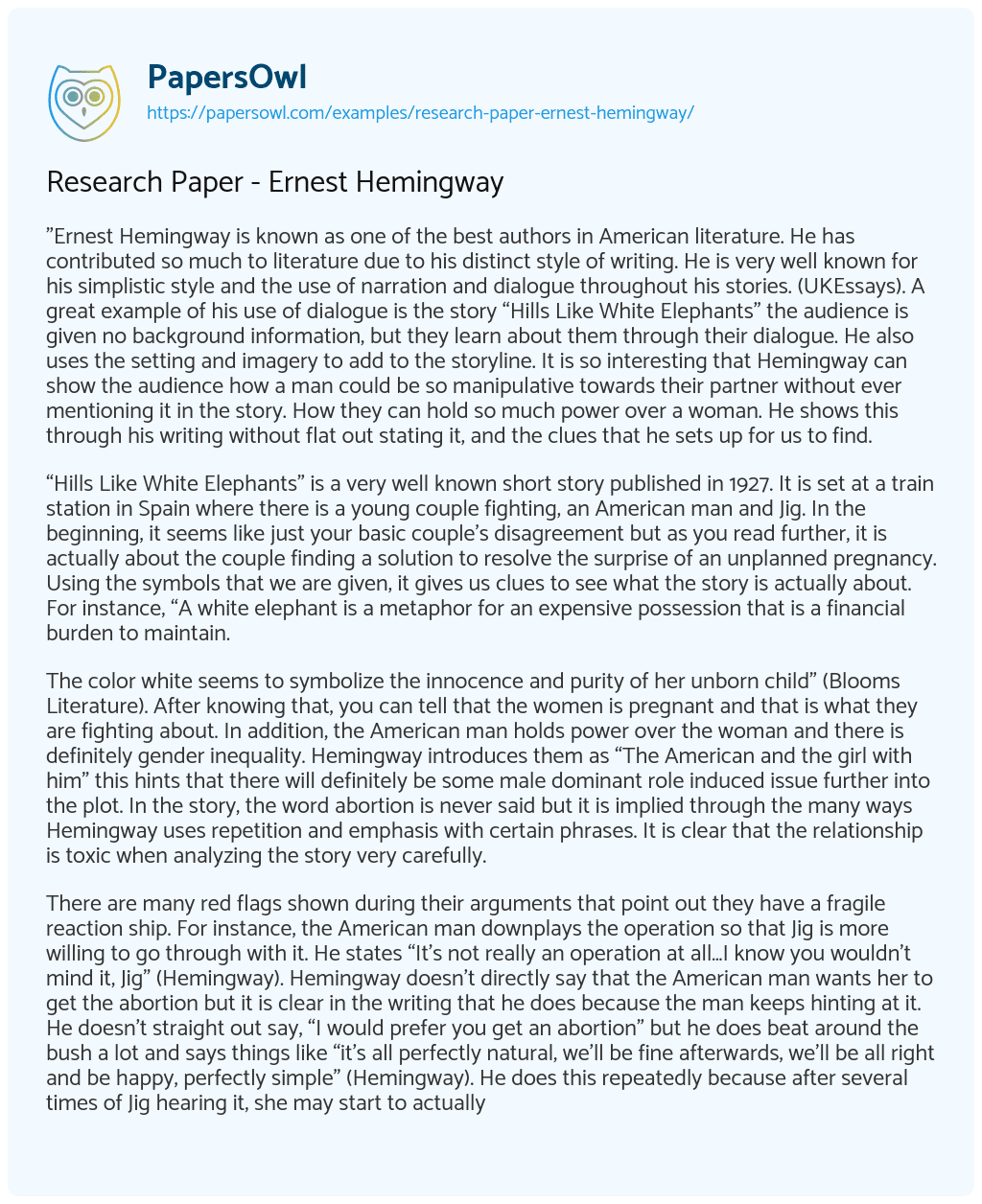 “Ernest Hemingway is known as one of the best authors in American literature. He has contributed so much to literature due to his distinct style of writing. He is very well known for his simplistic style and the use of narration and dialogue throughout his stories. (UKEssays). A great example of his use of dialogue is the story “Hills Like White Elephants” the audience is given no background information, but they learn about them through their dialogue. He also uses the setting and imagery to add to the storyline. It is so interesting that Hemingway can show the audience how a man could be so manipulative towards their partner without ever mentioning it in the story. How they can hold so much power over a woman. He shows this through his writing without flat out stating it, and the clues that he sets up for us to find.

“Hills Like White Elephants” is a very well known short story published in 1927. It is set at a train station in Spain where there is a young couple fighting, an American man and Jig. In the beginning, it seems like just your basic couple’s disagreement but as you read further, it is actually about the couple finding a solution to resolve the surprise of an unplanned pregnancy. Using the symbols that we are given, it gives us clues to see what the story is actually about. For instance, “A white elephant is a metaphor for an expensive possession that is a financial burden to maintain.

The color white seems to symbolize the innocence and purity of her unborn child” (Blooms Literature). After knowing that, you can tell that the women is pregnant and that is what they are fighting about. In addition, the American man holds power over the woman and there is definitely gender inequality. Hemingway introduces them as “The American and the girl with him” this hints that there will definitely be some male dominant role induced issue further into the plot. In the story, the word abortion is never said but it is implied through the many ways Hemingway uses repetition and emphasis with certain phrases. It is clear that the relationship is toxic when analyzing the story very carefully.

There are many red flags shown during their arguments that point out they have a fragile reaction ship. For instance, the American man downplays the operation so that Jig is more willing to go through with it. He states “It’s not really an operation at all…I know you wouldn’t mind it, Jig” (Hemingway). Hemingway doesn’t directly say that the American man wants her to get the abortion but it is clear in the writing that he does because the man keeps hinting at it. He doesn’t straight out say, “I would prefer you get an abortion” but he does beat around the bush a lot and says things like “it’s all perfectly natural, we’ll be fine afterwards, we’ll be all right and be happy, perfectly simple” (Hemingway). He does this repeatedly because after several times of Jig hearing it, she may start to actually believe him and go through with it. As stated previously, this is how Hemingway uses repetition and emphasizes certain phrases to make a point. The American man tries to make the abortion sound like the better choice because it’s in his own interest.

One of the main themes shown through this story is the power and control that men can exert over a woman in an unhealthy relationship. Hemingway does a great job showing how a man can show dominance over women subtly so she doesn’t realize she’s being manipulated. An example of this is when the American man tries to make it seem like he is being supportive and saying not to do it if she isn’t comfortable. The author shows this so the audience knows that he is just doing this to cover himself.

He psychologically abuses her to the point where she is wrapped around his finger and does what she is told. It gets to the point where Jig says “Then I’ll do it. Because I don’t care about me” (Hemingway). She just wants things to go back to normal and she is willing to make such a permanent decision just to please her partner. He is very insensitive because he is putting himself first instead of his partner’s. He is acting like it was her fault that she became pregnant when in reality it took

two of them to make it happen. It shows how unfair he is because she is trying to think of all of these ideas to somewhat get him to understand what she wants but he is unwilling to hear her out. He can’t even try to imagine he just automatically shuts her out, and she can’t do anything about it because he holds power over her.

As Jig is trying to envision her life with a child she overlooks the hills filled with trees and fields beyond the rivers and mountains and says “we could have everything and every day we make it more impossible” (Hemingway). The scenery is a symbol for seeing what she could have if she had a child, all the beautiful things that nature makes for us. After the American man says that they can’t have everything and that they’ll never get it back, he makes her sit by him at a table that overlooks the dry side of the valley they were by. This represents how she would feel on the inside if she considers his point of view and gets the abortion, which would be sterile and stripped of fertility.

Hemingway purposely leaves the ending for his audience to conclude themselves. It ends as they’re both awaiting the train’s arrival. He doesn’t add if Jig makes the decision to follow through with her partner’s choice or if she puts herself first and had the child. The last thing said is the American man asking if she feels better and she just responds that she is fine and there is nothing wrong with her. It leaves the audience with a lot of questions because it seems that throughout the plot she is going to get the abortion because she is so vulnerable but at the end, it seems like she gains the courage to say there is nothing wrong with her. This points to two different outcomes which are she stays with him and gets the abortion, or she breaks up with and him and raises the baby. It is very interesting because most authors write a resolution to their story but this just shows one of the ways that Hemingway is unique from the rest.

After reading the short story, it is clearly shown why Ernest Hemingway is such a famous author. He writes about such a powerful topic like abortion without actually spelling it out for the audience. He uses the settings and scenery to convey the story, where you have to critically analyze the story to understand its true meaning. He doesn’t give us information about the characters but he uses the dialogue so we get to know what is really happening. He also shows how easily a man can have so much power over a woman without actually having to follow the stereotypes of what a toxic relationship is like. Just by reading and seeing his actions we learn so much. Hemingway makes the reader think beyond the story to realize what is occurring and to grasp the full understanding of what he is writing.”