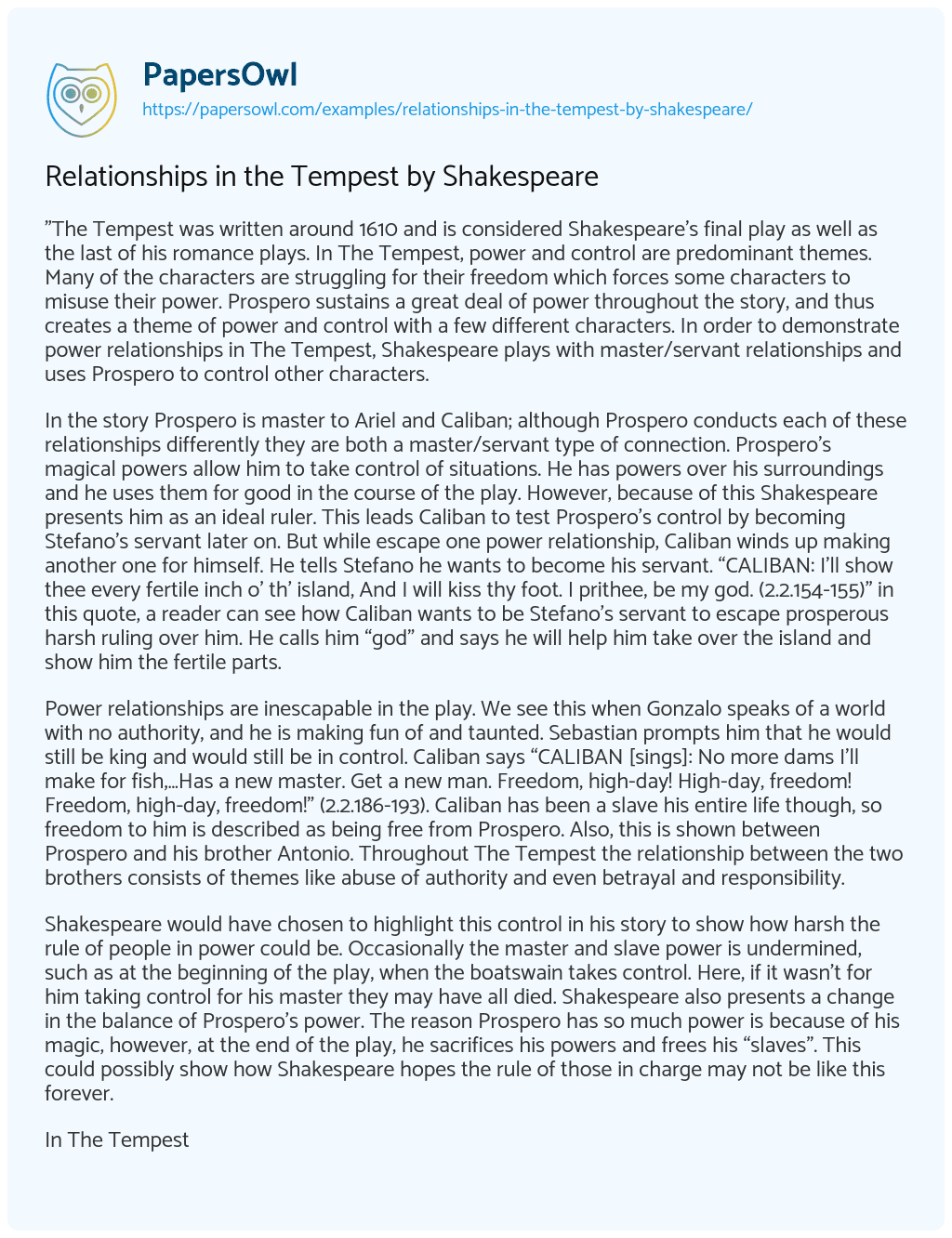 “The Tempest was written around 1610 and is considered Shakespeare’s final play as well as the last of his romance plays. In The Tempest, power and control are predominant themes. Many of the characters are struggling for their freedom which forces some characters to misuse their power. Prospero sustains a great deal of power throughout the story, and thus creates a theme of power and control with a few different characters. In order to demonstrate power relationships in The Tempest, Shakespeare plays with master/servant relationships and uses Prospero to control other characters.

In the story Prospero is master to Ariel and Caliban; although Prospero conducts each of these relationships differently they are both a master/servant type of connection. Prospero’s magical powers allow him to take control of situations. He has powers over his surroundings and he uses them for good in the course of the play. However, because of this Shakespeare presents him as an ideal ruler. This leads Caliban to test Prospero’s control by becoming Stefano’s servant later on. But while escape one power relationship, Caliban winds up making another one for himself. He tells Stefano he wants to become his servant. “CALIBAN: I’ll show thee every fertile inch o’ th’ island, And I will kiss thy foot. I prithee, be my god. (2.2.154-155)” in this quote, a reader can see how Caliban wants to be Stefano’s servant to escape prosperous harsh ruling over him. He calls him “god” and says he will help him take over the island and show him the fertile parts.

Power relationships are inescapable in the play. We see this when Gonzalo speaks of a world with no authority, and he is making fun of and taunted. Sebastian prompts him that he would still be king and would still be in control. Caliban says “CALIBAN [sings]: No more dams I’ll make for fish,…Has a new master. Get a new man. Freedom, high-day! High-day, freedom! Freedom, high-day, freedom!” (2.2.186-193). Caliban has been a slave his entire life though, so freedom to him is described as being free from Prospero. Also, this is shown between Prospero and his brother Antonio. Throughout The Tempest the relationship between the two brothers consists of themes like abuse of authority and even betrayal and responsibility.

Shakespeare would have chosen to highlight this control in his story to show how harsh the rule of people in power could be. Occasionally the master and slave power is undermined, such as at the beginning of the play, when the boatswain takes control. Here, if it wasn’t for him taking control for his master they may have all died. Shakespeare also presents a change in the balance of Prospero’s power. The reason Prospero has so much power is because of his magic, however, at the end of the play, he sacrifices his powers and frees his “slaves”. This could possibly show how Shakespeare hopes the rule of those in charge may not be like this forever.

Relationships in the Tempest by Shakespeare. (2020, Aug 27). Retrieved from https://papersowl.com/examples/relationships-in-the-tempest-by-shakespeare/