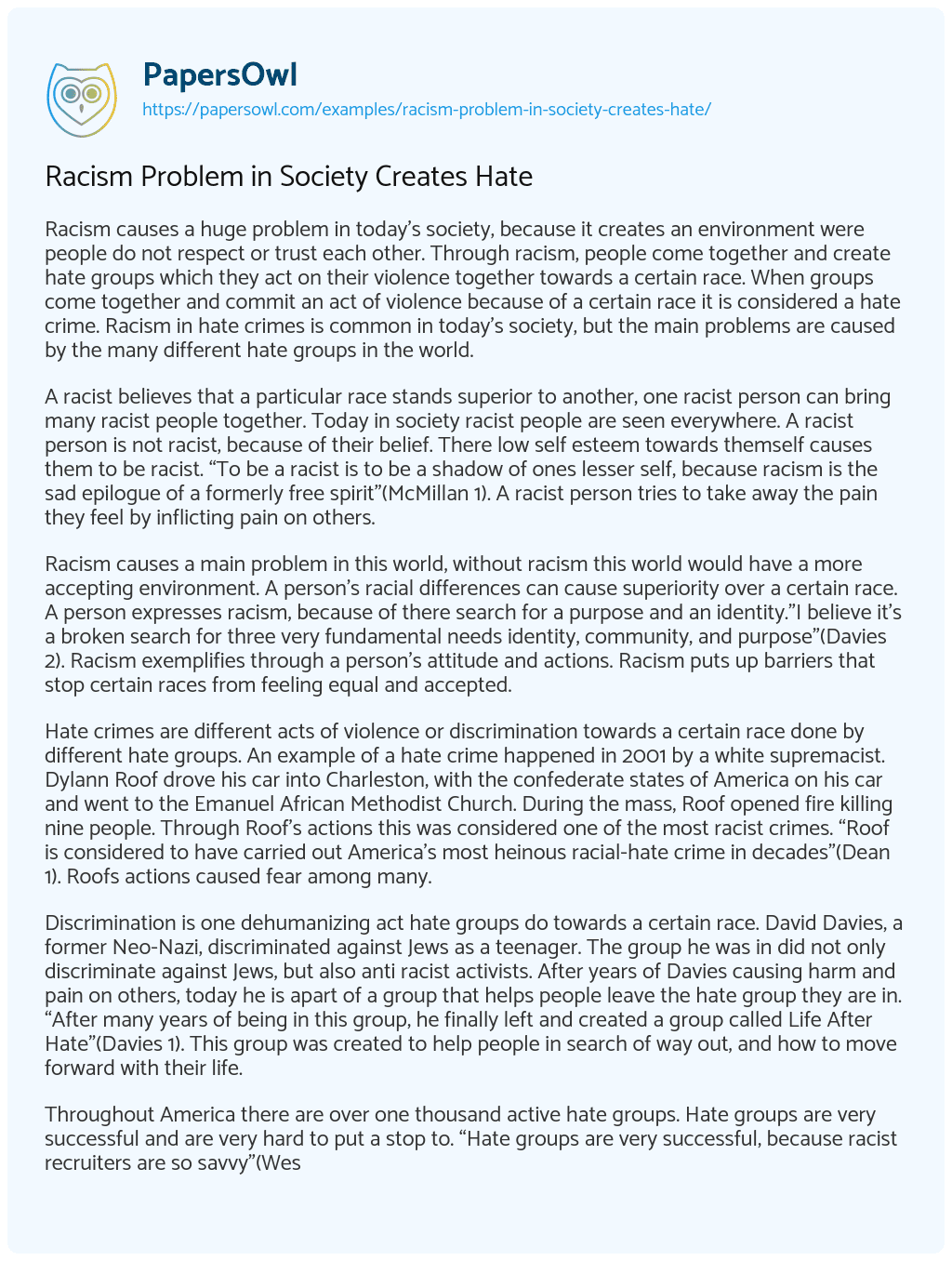 Racism causes a huge problem in today’s society, because it creates an environment were people do not respect or trust each other. Through racism, people come together and create hate groups which they act on their violence together towards a certain race. When groups come together and commit an act of violence because of a certain race it is considered a hate crime. Racism in hate crimes is common in today’s society, but the main problems are caused by the many different hate groups in the world.

A racist believes that a particular race stands superior to another, one racist person can bring many racist people together. Today in society racist people are seen everywhere. A racist person is not racist, because of their belief. There low self esteem towards themself causes them to be racist. “To be a racist is to be a shadow of ones lesser self, because racism is the sad epilogue of a formerly free spirit”(McMillan 1). A racist person tries to take away the pain they feel by inflicting pain on others.

Racism causes a main problem in this world, without racism this world would have a more accepting environment. A person’s racial differences can cause superiority over a certain race. A person expresses racism, because of there search for a purpose and an identity.”I believe it’s a broken search for three very fundamental needs identity, community, and purpose”(Davies 2). Racism exemplifies through a person’s attitude and actions. Racism puts up barriers that stop certain races from feeling equal and accepted.

Hate crimes are different acts of violence or discrimination towards a certain race done by different hate groups. An example of a hate crime happened in 2001 by a white supremacist. Dylann Roof drove his car into Charleston, with the confederate states of America on his car and went to the Emanuel African Methodist Church. During the mass, Roof opened fire killing nine people. Through Roof’s actions this was considered one of the most racist crimes. “Roof is considered to have carried out America’s most heinous racial-hate crime in decades”(Dean 1). Roofs actions caused fear among many.

Discrimination is one dehumanizing act hate groups do towards a certain race. David Davies, a former Neo-Nazi, discriminated against Jews as a teenager. The group he was in did not only discriminate against Jews, but also anti racist activists. After years of Davies causing harm and pain on others, today he is apart of a group that helps people leave the hate group they are in. “After many years of being in this group, he finally left and created a group called Life After Hate”(Davies 1). This group was created to help people in search of way out, and how to move forward with their life.

The FBI is the group that takes over when a hate crime is committed. “The FBI’s top priority is to reduce violent crimes in America”(David 1). Many people do not want the FBI involved when a hate crime has been committed, because they feel like they are not going to help them.“Many people think the FBI tries to take their freedom away, but the FBI is actually doing the opposite”(Johnson 1). With the FBI’s help, America can put an end to hate crimes.

Many people are affected by hate crimes when they happen, communities are one of the main sources affected by them. Communities are supposed to be happy and a safe environment, but when a hate crime takes place, it can turn a community upside down. When a hate crime takes place it can cause safety issues, and it could affect everyone emotionally. ”Any violence when you talk about it, just rips out the heart and soul of the community”(Dean 2). When hate crimes happens in communities, the communities lose trust and their acceptance for outsiders.

Racism a major problem in today’s society, is demonstrated through hate groups.Racism is such a big issue to fix, because it has been in America’s history for decades. It is hard to fix a persons mind on racism, but the system in which racism is shown can be fixed. Hate groups not only affect people, but it affects communities also. If racism, hate groups, and hate crimes were eliminated the world would be a safer place.