Theme of Non-violence in ‘March: Book One’ 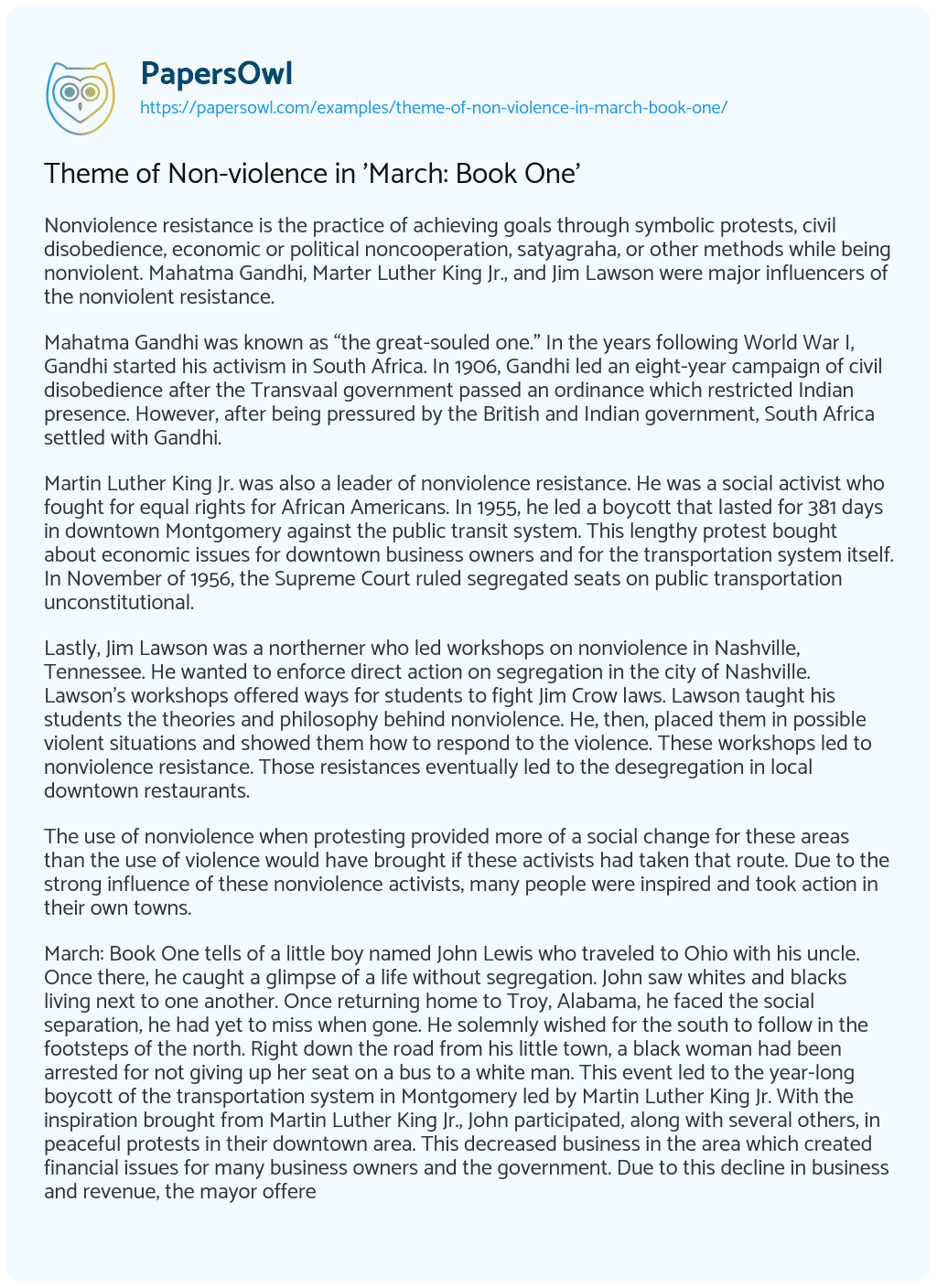 Nonviolence resistance is the practice of achieving goals through symbolic protests, civil disobedience, economic or political noncooperation, satyagraha, or other methods while being nonviolent. Mahatma Gandhi, Marter Luther King Jr., and Jim Lawson were major influencers of the nonviolent resistance.

Mahatma Gandhi was known as “the great-souled one.” In the years following World War I, Gandhi started his activism in South Africa. In 1906, Gandhi led an eight-year campaign of civil disobedience after the Transvaal government passed an ordinance which restricted Indian presence. However, after being pressured by the British and Indian government, South Africa settled with Gandhi.

Martin Luther King Jr. was also a leader of nonviolence resistance. He was a social activist who fought for equal rights for African Americans. In 1955, he led a boycott that lasted for 381 days in downtown Montgomery against the public transit system. This lengthy protest bought about economic issues for downtown business owners and for the transportation system itself. In November of 1956, the Supreme Court ruled segregated seats on public transportation unconstitutional.

Lastly, Jim Lawson was a northerner who led workshops on nonviolence in Nashville, Tennessee. He wanted to enforce direct action on segregation in the city of Nashville. Lawson’s workshops offered ways for students to fight Jim Crow laws. Lawson taught his students the theories and philosophy behind nonviolence. He, then, placed them in possible violent situations and showed them how to respond to the violence. These workshops led to nonviolence resistance. Those resistances eventually led to the desegregation in local downtown restaurants.

The use of nonviolence when protesting provided more of a social change for these areas than the use of violence would have brought if these activists had taken that route. Due to the strong influence of these nonviolence activists, many people were inspired and took action in their own towns.

March: Book One tells of a little boy named John Lewis who traveled to Ohio with his uncle. Once there, he caught a glimpse of a life without segregation. John saw whites and blacks living next to one another. Once returning home to Troy, Alabama, he faced the social separation, he had yet to miss when gone. He solemnly wished for the south to follow in the footsteps of the north. Right down the road from his little town, a black woman had been arrested for not giving up her seat on a bus to a white man. This event led to the year-long boycott of the transportation system in Montgomery led by Martin Luther King Jr. With the inspiration brought from Martin Luther King Jr., John participated, along with several others, in peaceful protests in their downtown area. This decreased business in the area which created financial issues for many business owners and the government. Due to this decline in business and revenue, the mayor offered a partial segregation system. However, that was not what protesters wanted to settle with; thus, the Student Nonviolent Organization Committee was formed. The committee then pressed forwards even harder after someone threw a bomb into a participants house. Thousands of people marched to city hall to confront the mayor of this issue. To avoid violent attacks that could destroy the city and prevent the formation of mobs, the mayor agreed to appeal to all citizens to end discrimination, bigotry, bias, and hatred.

In many studies, it has been found that the use of non-violence is more effective than the use of violence. One study compared the advantages and disadvantages of non-violence and violent protests in the Middle East. Stating that, non-violence protests had a lower failure rate than that of violence. Non-violence protests had a succession rate of fifty-one percent, while violence had about twenty-seven percent. It also claimed that non-violence had a lower risk factor due to the peaceful nature surrounding the protest. Other claims include having a positive solution, a better feeling about protesting from aspiration, and more organization. The study also lists other, such as Madagascar, Serbia, Ukraine, and Nepal, that succeeded in revolution via peace.

I agree that non-violence is more effective and produces better results compared to violence. Statistically, with the failure rate being higher as well as the death or harm rates being higher, I will have to side with that of non-violence. Though, I do not believe violence is always avoidable; I do think it should be the last resort.

Theme of Non-violence in 'March: Book One'. (2021, May 29). Retrieved from https://papersowl.com/examples/theme-of-non-violence-in-march-book-one/

The Teachings of Non-Violence by Mahatma Gandhi