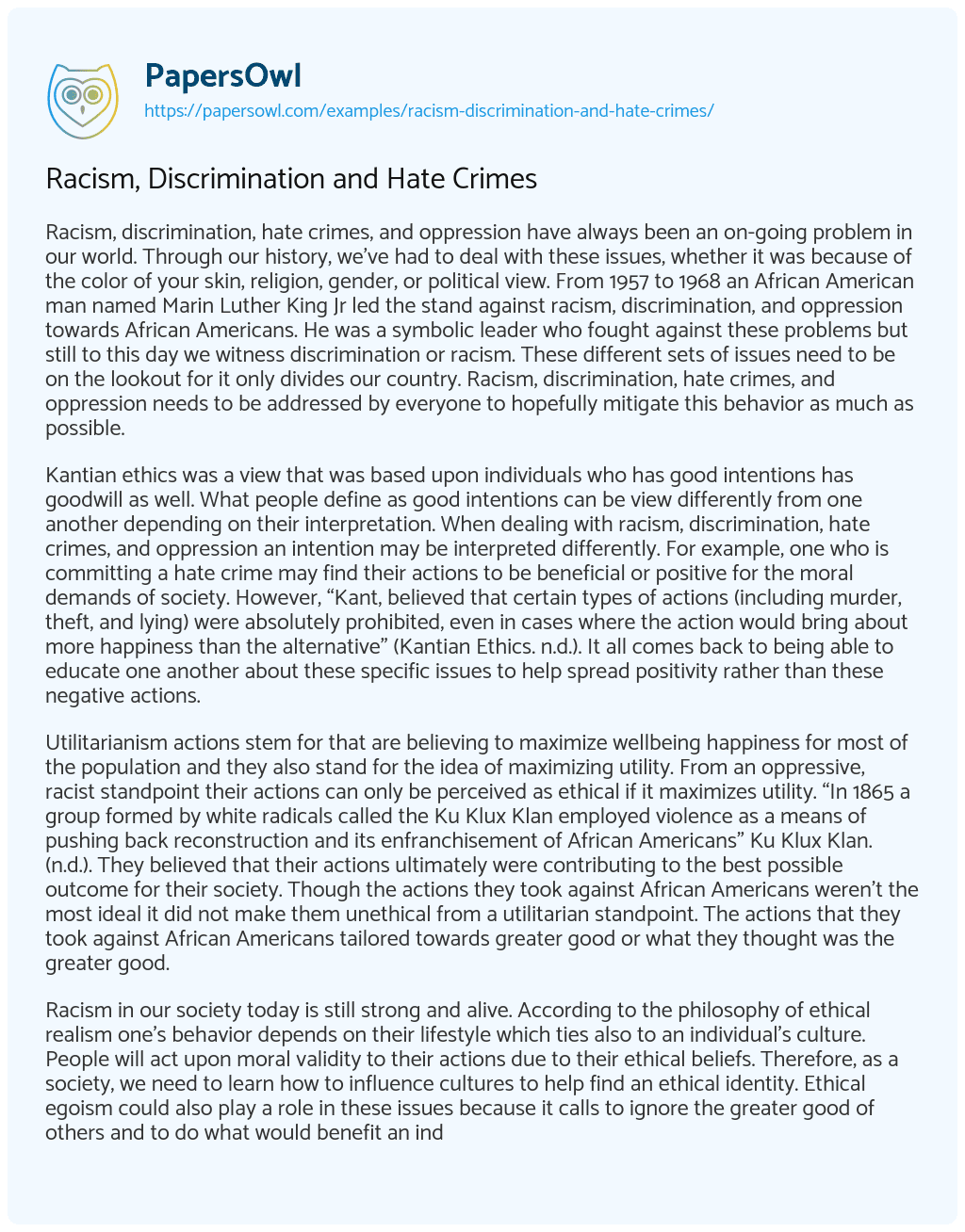 Kantian ethics was a view that was based upon individuals who has good intentions has goodwill as well. What people define as good intentions can be view differently from one another depending on their interpretation. When dealing with racism, discrimination, hate crimes, and oppression an intention may be interpreted differently. For example, one who is committing a hate crime may find their actions to be beneficial or positive for the moral demands of society. However, “Kant, believed that certain types of actions (including murder, theft, and lying) were absolutely prohibited, even in cases where the action would bring about more happiness than the alternative” (Kantian Ethics. n.d.). It all comes back to being able to educate one another about these specific issues to help spread positivity rather than these negative actions.

Utilitarianism actions stem for that are believing to maximize wellbeing happiness for most of the population and they also stand for the idea of maximizing utility. From an oppressive, racist standpoint their actions can only be perceived as ethical if it maximizes utility. “In 1865 a group formed by white radicals called the Ku Klux Klan employed violence as a means of pushing back reconstruction and its enfranchisement of African Americans” Ku Klux Klan. (n.d.). They believed that their actions ultimately were contributing to the best possible outcome for their society. Though the actions they took against African Americans weren’t the most ideal it did not make them unethical from a utilitarian standpoint. The actions that they took against African Americans tailored towards greater good or what they thought was the greater good.

Racism in our society today is still strong and alive. According to the philosophy of ethical realism one’s behavior depends on their lifestyle which ties also to an individual’s culture. People will act upon moral validity to their actions due to their ethical beliefs. Therefore, as a society, we need to learn how to influence cultures to help find an ethical identity. Ethical egoism could also play a role in these issues because it calls to ignore the greater good of others and to do what would benefit an individual rather than benefiting anyone else.

The Vast concern for racism to stop racism, discrimination, hate crimes and oppression has made them subjects of ethical theory and a subject of environment. The theories that fall into the protection of one’s natural rights of a human and the natural environment. To meet these demands of these ethical theories, people need to be educated on the current problem we have in American and how hatred and racism in the long run. “According to natural law moral theory, the moral standards that govern human behavior are, in some sense, objectively derived from the nature of human beings and the nature of the world” (Himma, K. E. n.d.).

Women in the past have been oppressed in many ways due to their gender and their social status. For a while woman were not even allowed to vote, women were not even considered equal to men. “Feminist Ethics is an attempt to revise, reformulate, or rethink traditional ethics to the extent it depreciates or devalues women’s moral experience” ( Tong, Rosemarie and Williams, Nancy, “Feminist Ethics). More frequently today you now see feminist ethics in everyday life becoming stronger through media, entertainment, and public figures. Feminist ethics do not exactly state a normal standard on women, but it offers woman opportunities to determine ways to affect their moral decisions. Women now are standing against the social norms and fighting against the oppression that has been brought upon them.

In the far east of our world specifically in Asia contain many eastern philosophies. According to Confucianism one must maintain philosophy while maintaining moral virtue. Actions in Confucianism is rarely deemed as good or bad, but the morality of the action is tied toward morality and virtues of the person. Actions depending on the person can be good or bad just depending on the person. Now the Buddhist believed heavily in Karma: What goes around comes around. “Buddhism inspires us to take responsibility for our own lives, without moralizing, by understanding cause and effect (karma). Just like gravity, the law of karma functions, everywhere and all the time”. If one was to take a Buddhist approach towards racism, discrimination, hate crimes, and oppression people could possibly strive to better their own karma.

To conclude racism, discrimination, hate crimes, and oppression these ethics are determined by the individual involve. These ethics involve doing the right thing when they are in a specific scenario. With some much change in our society today with the intolerance of any of these situations we can hope that one day racism, discrimination, hate crimes and oppression will be eradicated. Unethical decisions have a negative effect on our country and a community. They have a negative effect on the culture in our society and can influence a negative culture. Everyone needs to make it their responsibility to help change the ethical views imposed on it.