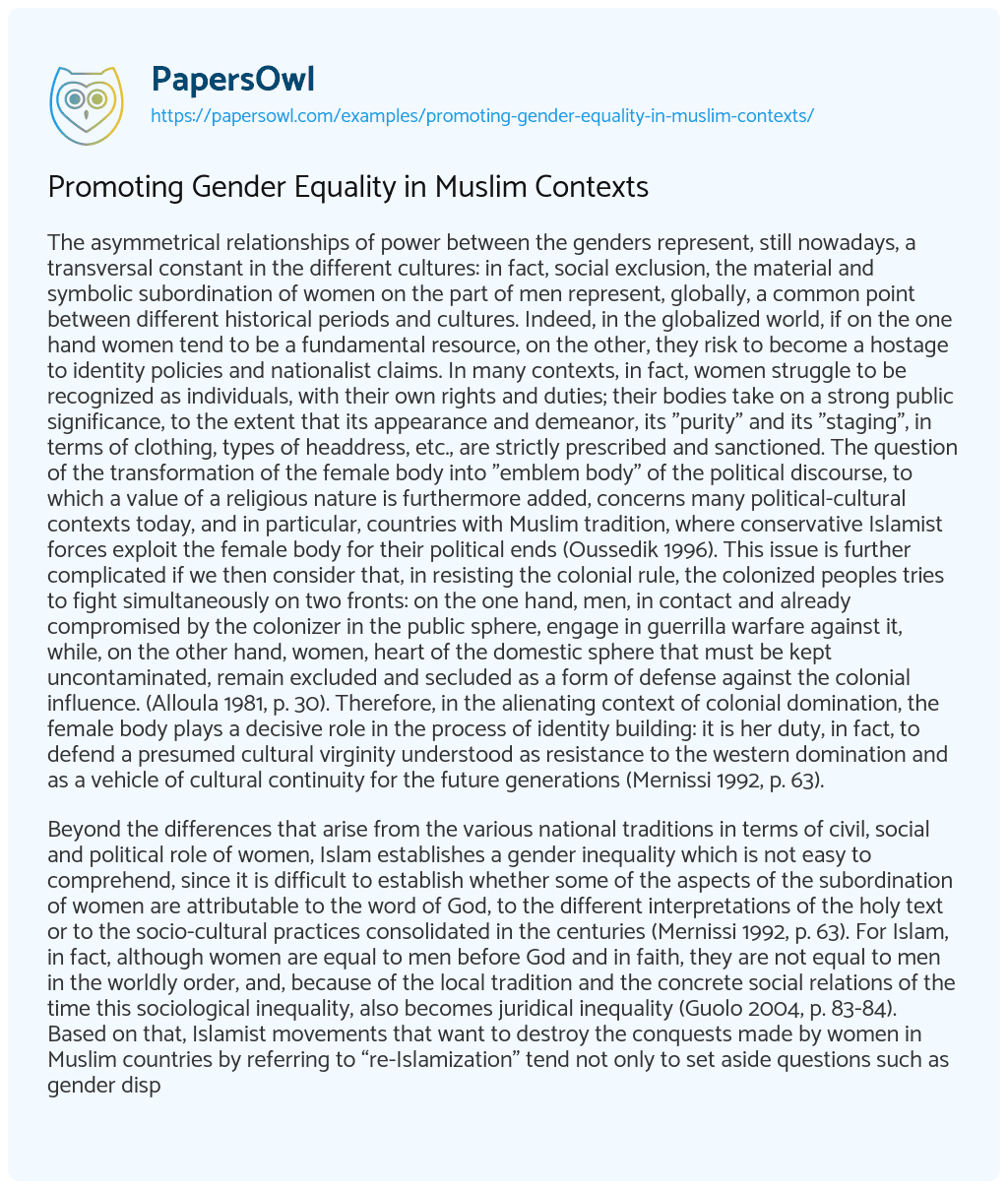 The asymmetrical relationships of power between the genders represent, still nowadays, a transversal constant in the different cultures: in fact, social exclusion, the material and symbolic subordination of women on the part of men represent, globally, a common point between different historical periods and cultures. Indeed, in the globalized world, if on the one hand women tend to be a fundamental resource, on the other, they risk to become a hostage to identity policies and nationalist claims. In many contexts, in fact, women struggle to be recognized as individuals, with their own rights and duties; their bodies take on a strong public significance, to the extent that its appearance and demeanor, its “purity” and its “staging”, in terms of clothing, types of headdress, etc., are strictly prescribed and sanctioned. The question of the transformation of the female body into “emblem body” of the political discourse, to which a value of a religious nature is furthermore added, concerns many political-cultural contexts today, and in particular, countries with Muslim tradition, where conservative Islamist forces exploit the female body for their political ends (Oussedik 1996). This issue is further complicated if we then consider that, in resisting the colonial rule, the colonized peoples tries to fight simultaneously on two fronts: on the one hand, men, in contact and already compromised by the colonizer in the public sphere, engage in guerrilla warfare against it, while, on the other hand, women, heart of the domestic sphere that must be kept uncontaminated, remain excluded and secluded as a form of defense against the colonial influence. (Alloula 1981, p. 30). Therefore, in the alienating context of colonial domination, the female body plays a decisive role in the process of identity building: it is her duty, in fact, to defend a presumed cultural virginity understood as resistance to the western domination and as a vehicle of cultural continuity for the future generations (Mernissi 1992, p. 63).

Beyond the differences that arise from the various national traditions in terms of civil, social and political role of women, Islam establishes a gender inequality which is not easy to comprehend, since it is difficult to establish whether some of the aspects of the subordination of women are attributable to the word of God, to the different interpretations of the holy text or to the socio-cultural practices consolidated in the centuries (Mernissi 1992, p. 63). For Islam, in fact, although women are equal to men before God and in faith, they are not equal to men in the worldly order, and, because of the local tradition and the concrete social relations of the time this sociological inequality, also becomes juridical inequality (Guolo 2004, p. 83-84). Based on that, Islamist movements that want to destroy the conquests made by women in Muslim countries by referring to “re-Islamization” tend not only to set aside questions such as gender disparities, but, in times of great geopolitical conflicts and political instability, they also tend to instrumentalize the issue of gender inequality for their own purposes. Therefore, it is not a religious matter in the strict sense of the term, but, it is rather a political movement which takes shelter behind religion to impose a caliphate where intolerance towards gender differences are strongly in force. In this context, therefore, the veil takes on a symbolic value since it enshrines, de facto, the separation between the public and the private, the outside and the inside and symbolizes the exclusion and segregation of women.

Gender Equality in the Workforce

The Relationship between Gender Equality and Democracy