Poor Nutrition and its Effects on Learning 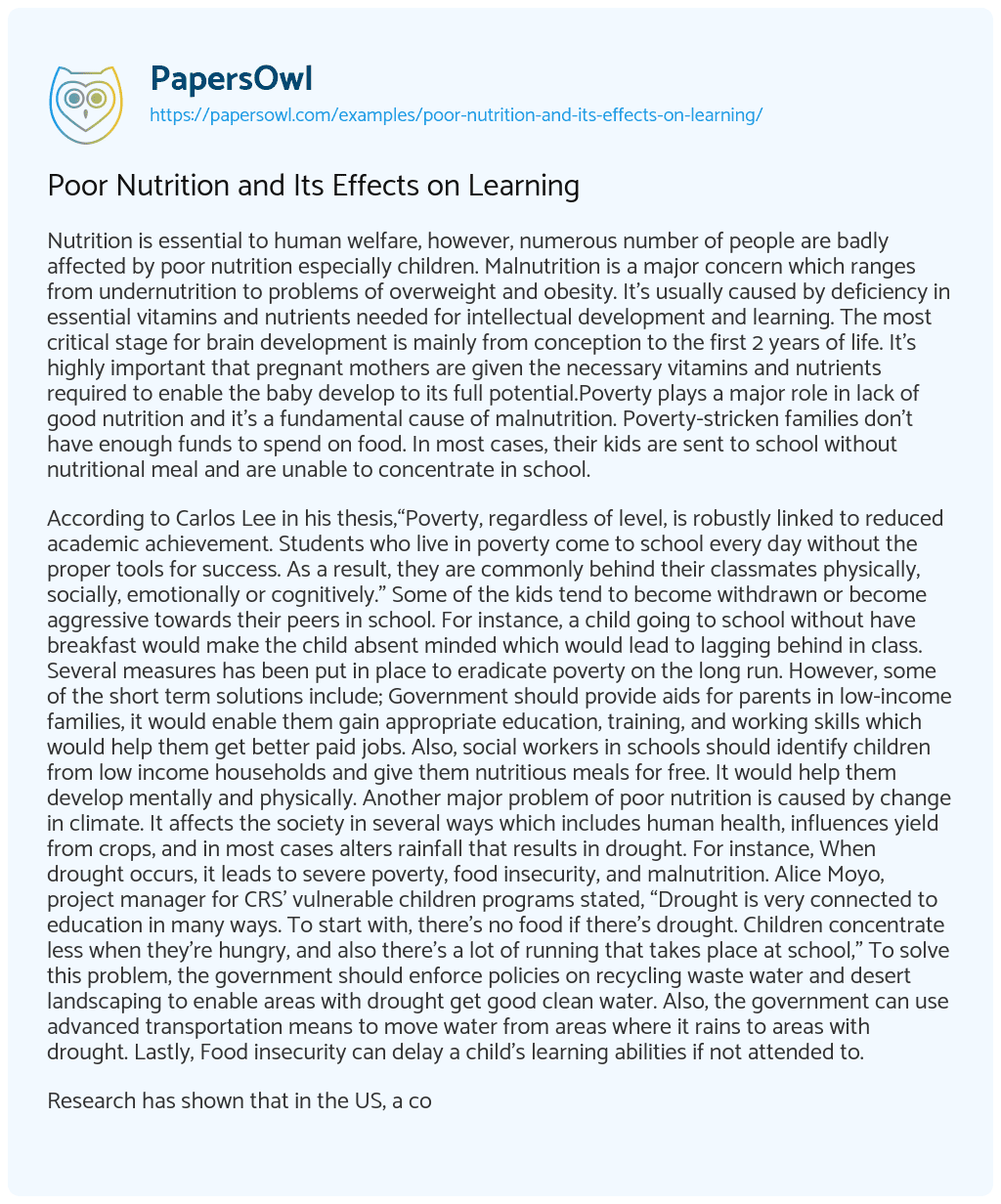 Nutrition is essential to human welfare, however, numerous number of people are badly affected by poor nutrition especially children. Malnutrition is a major concern which ranges from undernutrition to problems of overweight and obesity. It’s usually caused by deficiency in essential vitamins and nutrients needed for intellectual development and learning. The most critical stage for brain development is mainly from conception to the first 2 years of life. It’s highly important that pregnant mothers are given the necessary vitamins and nutrients required to enable the baby develop to its full potential.Poverty plays a major role in lack of good nutrition and it’s a fundamental cause of malnutrition. Poverty-stricken families don’t have enough funds to spend on food. In most cases, their kids are sent to school without nutritional meal and are unable to concentrate in school.

According to Carlos Lee in his thesis,“Poverty, regardless of level, is robustly linked to reduced academic achievement. Students who live in poverty come to school every day without the proper tools for success. As a result, they are commonly behind their classmates physically, socially, emotionally or cognitively.” Some of the kids tend to become withdrawn or become aggressive towards their peers in school. For instance, a child going to school without have breakfast would make the child absent minded which would lead to lagging behind in class. Several measures has been put in place to eradicate poverty on the long run. However, some of the short term solutions include; Government should provide aids for parents in low-income families, it would enable them gain appropriate education, training, and working skills which would help them get better paid jobs. Also, social workers in schools should identify children from low income households and give them nutritious meals for free. It would help them develop mentally and physically. Another major problem of poor nutrition is caused by change in climate. It affects the society in several ways which includes human health, influences yield from crops, and in most cases alters rainfall that results in drought. For instance, When drought occurs, it leads to severe poverty, food insecurity, and malnutrition. Alice Moyo, project manager for CRS’ vulnerable children programs stated, “Drought is very connected to education in many ways. To start with, there’s no food if there’s drought. Children concentrate less when they’re hungry, and also there’s a lot of running that takes place at school,” To solve this problem, the government should enforce policies on recycling waste water and desert landscaping to enable areas with drought get good clean water. Also, the government can use advanced transportation means to move water from areas where it rains to areas with drought. Lastly, Food insecurity can delay a child’s learning abilities if not attended to.

Research has shown that in the US, a considerable number of kids under the age of 5 live in households that lack adequate quality of food that is needed to improve healthy and energetic living. Anna Johnson, an assistant professor at Georgetown University declared, ‘In our study, food insecurity in infancy and toddlerhood predicted lower cognitive and social-emotional skills in kindergarten, skills that can predict later success in academics and life.’ To this end, it is imperative for the government to provide food pantry in each communities whereby low income families can fed at least twice a day. In conclusion, it is obvious that malnutrition has a major effect on the learning , most especially in third world countries whereby people are affected by poverty, climate change, and food insecurity. The government can do its bit in eradicating poverty but the onus still lies with the entire community who live among the poor to ensure that all the policies are implemented.

Poor Nutrition and Its Effects on Learning. (2022, Apr 10). Retrieved from https://papersowl.com/examples/poor-nutrition-and-its-effects-on-learning/

Food Waste Due to Poor Products

The Effects of Food Insecurity in the Community

Specific Learning Disabilities and the Causes of Germaine’s Difficulties

Poor Education is a Social Issue