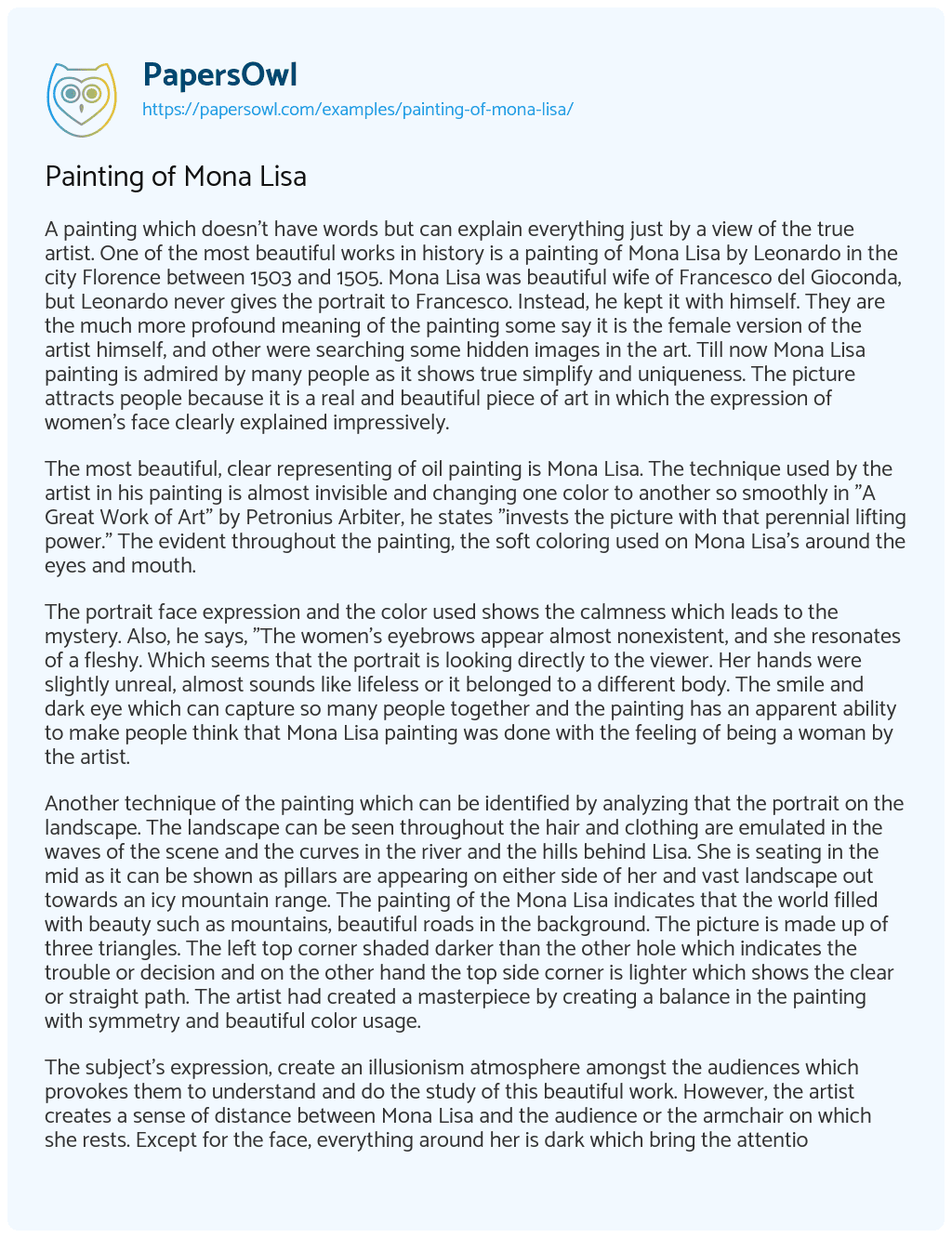 A painting which doesn’t have words but can explain everything just by a view of the true artist. One of the most beautiful works in history is a painting of Mona Lisa by Leonardo in the city Florence between 1503 and 1505. Mona Lisa was beautiful wife of Francesco del Gioconda, but Leonardo never gives the portrait to Francesco. Instead, he kept it with himself. They are the much more profound meaning of the painting some say it is the female version of the artist himself, and other were searching some hidden images in the art. Till now Mona Lisa painting is admired by many people as it shows true simplify and uniqueness. The picture attracts people because it is a real and beautiful piece of art in which the expression of women’s face clearly explained impressively.

The most beautiful, clear representing of oil painting is Mona Lisa. The technique used by the artist in his painting is almost invisible and changing one color to another so smoothly in “A Great Work of Art” by Petronius Arbiter, he states “invests the picture with that perennial lifting power.” The evident throughout the painting, the soft coloring used on Mona Lisa’s around the eyes and mouth.

The portrait face expression and the color used shows the calmness which leads to the mystery. Also, he says, “The women’s eyebrows appear almost nonexistent, and she resonates of a fleshy. Which seems that the portrait is looking directly to the viewer. Her hands were slightly unreal, almost sounds like lifeless or it belonged to a different body. The smile and dark eye which can capture so many people together and the painting has an apparent ability to make people think that Mona Lisa painting was done with the feeling of being a woman by the artist.

Another technique of the painting which can be identified by analyzing that the portrait on the landscape. The landscape can be seen throughout the hair and clothing are emulated in the waves of the scene and the curves in the river and the hills behind Lisa. She is seating in the mid as it can be shown as pillars are appearing on either side of her and vast landscape out towards an icy mountain range. The painting of the Mona Lisa indicates that the world filled with beauty such as mountains, beautiful roads in the background. The picture is made up of three triangles. The left top corner shaded darker than the other hole which indicates the trouble or decision and on the other hand the top side corner is lighter which shows the clear or straight path. The artist had created a masterpiece by creating a balance in the painting with symmetry and beautiful color usage.

The subject’s expression, create an illusionism atmosphere amongst the audiences which provokes them to understand and do the study of this beautiful work. However, the artist creates a sense of distance between Mona Lisa and the audience or the armchair on which she rests. Except for the face, everything around her is dark which bring the attention directly to the front and make it the center of attraction. Moreover, the beauty of her expression which draws the focus of light on her but, it can immediately contrasted with the distance.

The question arises with such grace is just that is the portrait described as same the person or opposite. Whatever the painting shows may be is not real because it is showing as what the artist wants to show the beauty of the outside of the person, but we are not able to see the inner beauty by the painting. Only the landscape behind her created which can be seen by the detail of her mouth and famous smile.

Everyone for decades is working on the theories as the painting still exist and in good condition. All the artist is still trying to figure the sign of the smile in the portrait. The picture has been a mystery for the years and will remain for the rest of the life. The smile of Mona Lisa is seen differently by everyone and had a different meaning to every different viewer. Even the science has no answer for the special relations that personal pick for the smile on them. Margaret Livingstone, a professor at Harvard, claims that the painting is the most effective when viewed peripherally.