Overcoming Barriers to Gender Equality in the Workplace 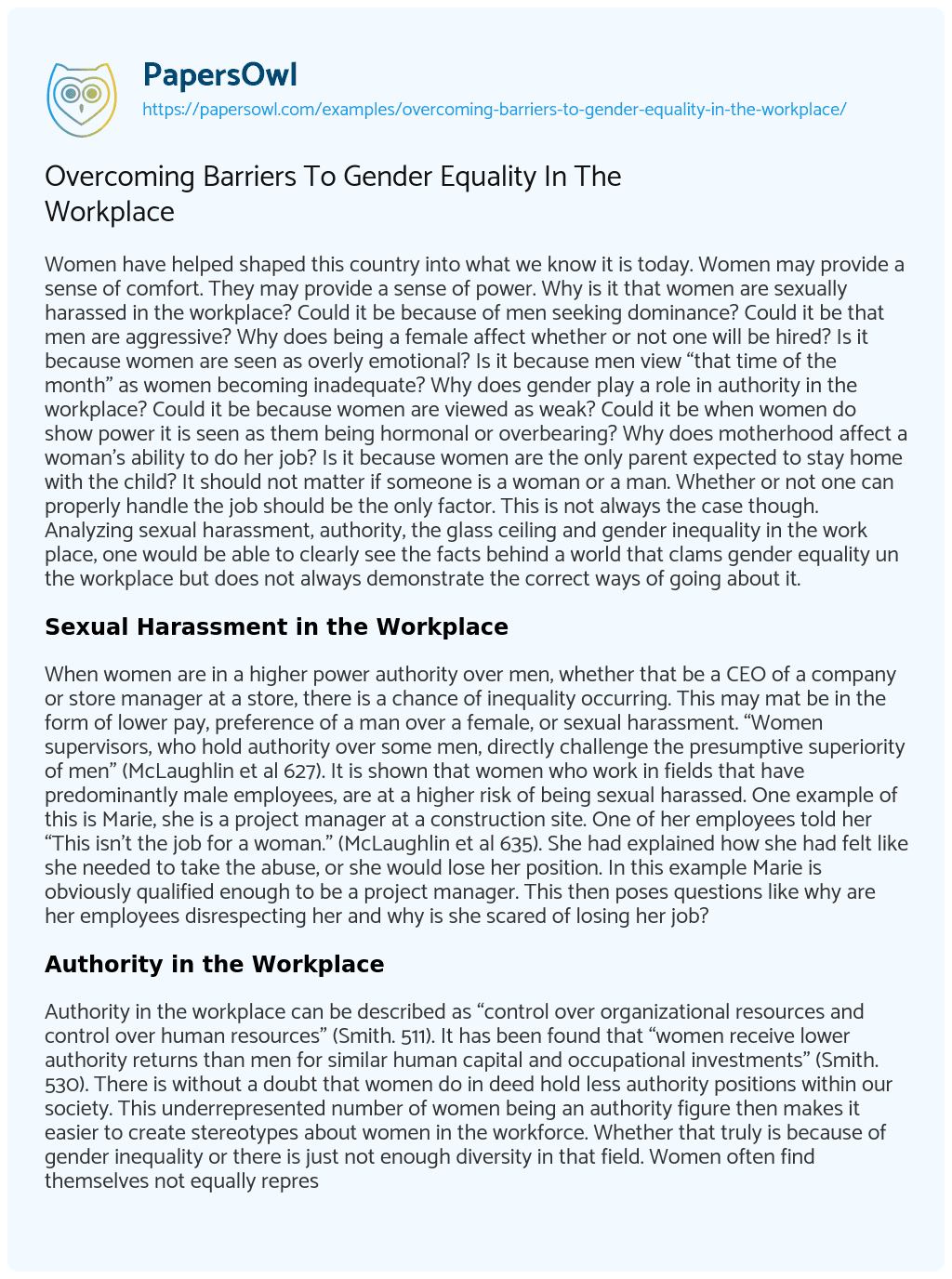 Women have helped shaped this country into what we know it is today. Women may provide a sense of comfort. They may provide a sense of power. Why is it that women are sexually harassed in the workplace? Could it be because of men seeking dominance? Could it be that men are aggressive? Why does being a female affect whether or not one will be hired? Is it because women are seen as overly emotional? Is it because men view “that time of the month” as women becoming inadequate? Why does gender play a role in authority in the workplace? Could it be because women are viewed as weak? Could it be when women do show power it is seen as them being hormonal or overbearing? Why does motherhood affect a woman’s ability to do her job? Is it because women are the only parent expected to stay home with the child? It should not matter if someone is a woman or a man. Whether or not one can properly handle the job should be the only factor. This is not always the case though. Analyzing sexual harassment, authority, the glass ceiling and gender inequality in the work place, one would be able to clearly see the facts behind a world that clams gender equality un the workplace but does not always demonstrate the correct ways of going about it.

Sexual Harassment in the Workplace

When women are in a higher power authority over men, whether that be a CEO of a company or store manager at a store, there is a chance of inequality occurring. This may mat be in the form of lower pay, preference of a man over a female, or sexual harassment. “Women supervisors, who hold authority over some men, directly challenge the presumptive superiority of men” (McLaughlin et al 627). It is shown that women who work in fields that have predominantly male employees, are at a higher risk of being sexual harassed. One example of this is Marie, she is a project manager at a construction site. One of her employees told her “This isn’t the job for a woman.” (McLaughlin et al 635). She had explained how she had felt like she needed to take the abuse, or she would lose her position. In this example Marie is obviously qualified enough to be a project manager. This then poses questions like why are her employees disrespecting her and why is she scared of losing her job?

Authority in the Workplace

Authority in the workplace can be described as “control over organizational resources and control over human resources” (Smith. 511). It has been found that “women receive lower authority returns than men for similar human capital and occupational investments” (Smith. 530). There is without a doubt that women do in deed hold less authority positions within our society. This underrepresented number of women being an authority figure then makes it easier to create stereotypes about women in the workforce. Whether that truly is because of gender inequality or there is just not enough diversity in that field. Women often find themselves not equally represent within the authority of the work place.

Stereotypes in the Workplace

There are many stereotypes that go along with being a female. More than often these stereotypes are brought into the workplace as a way to discourage women becoming an authority figure. “Descriptive stereotypes create problems for women when there is a perceived “lack of fit” between a woman’s attributes and the attributes believed to be required to succeed in traditionally male occupations and organizational positions” (Heilman). Some of the more common stereotypes are women are how women can be hormonal. Women are unable to keep their emotions from affecting their work. Women are weak or fragile. Women are not as smart compared to men. These stereotypes get in the way of women being able to make their way up within their career.

Women are still, after many years of advocating, rarely seen at the top in relation to leadership positions. Thus, creating the term called “Glass Ceiling”. “In 2005, eight (1.6%) fortune 500 companies in the US had female Chief Executive Officers (CEO); this number had not varied substantially over the at least 10 years” (Acker 200). Women have been seen moving up in the working place. Unfortunately, only a select few will actually make it to the top. Due to the lack of women holding the top-notch positions this in terms only makes it more difficult for women who are at a lower rank to make something of themselves. Most women can see themselves in higher positions, and strive to get there, but there is something holding them back. Something that is preventing them from getting through: The Glass Ceiling.

Motherhood vs. The workplace

There has been various research present the “punishment” that women endure, from their companies, if they become mothers. The majority of the time, mothers in the workforce do not have control of how they are treated. They might not get adequate time off or they might get penalized for having to leave early if their child gets sick. Motherhood plays a role in to the wage gap, due to state polices and parental leave. Often times the parents will need to choose between work and who will look after the child. The majority of the time it is the mother who has to stay home to care for their child. “Just as the obligations of work create the need for couples in general, and couples with children in particular, to negotiate about how to accomplish their household responsibilities, a similar dance of negotiations is often required of employees who need to balance work and family demands.” In the statement above, the majority of women who do have children to not receive the needs that are supposed to be given by their employer. Some women might even come back from maternity leave without a job.

There have been many positive changes in the work place regarding equality. One example of these changes is “the number of women among scientists and engineers has increased more than 20% since 2007 and women now make up about 40% of scientists and engineers” (Morgenroth and Ryan 671). Granted there have been these changes but women are still underrepresented in positions of power and authority. The way we go about addressing the issue can ultimately go one of two ways, it will either lead to change or backfire completely.

Women have and will more than likely continuously face barriers while trying to achieve any type of authority or leadership positions in the workplace until something is done to change this. There are countless things women must face in the workplace either being sexual harassment or stereotypes. Some of those things being “you are overly emotional” or “are you sure your qualified for this job” and “this is a mans job”. The Glass Ceiling will continue to be an issue until there are more females represented in the leadership positions. Women should not be payed less for the same job as a man just because they are female. Even though there have indeed been positive changes regarding gender equality, there is still a way to go. The best way to try and solve this issue is by creating men who want to be a part of the change.

Overcoming Barriers To Gender Equality In The Workplace. (2021, Feb 19). Retrieved from https://papersowl.com/examples/overcoming-barriers-to-gender-equality-in-the-workplace/

Gender Inequalities in the Workplace