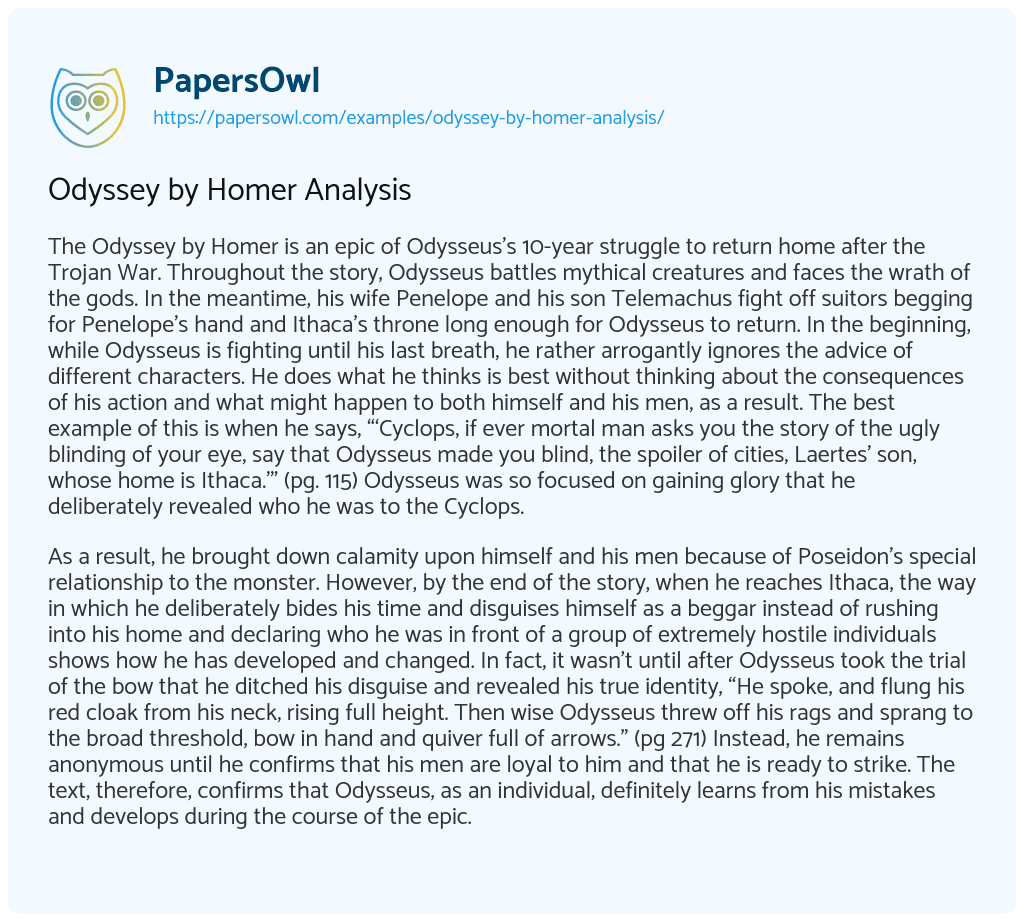 The Odyssey by Homer is an epic of Odysseus’s 10-year struggle to return home after the Trojan War. Throughout the story, Odysseus battles mythical creatures and faces the wrath of the gods. In the meantime, his wife Penelope and his son Telemachus fight off suitors begging for Penelope’s hand and Ithaca’s throne long enough for Odysseus to return. In the beginning, while Odysseus is fighting until his last breath, he rather arrogantly ignores the advice of different characters. He does what he thinks is best without thinking about the consequences of his action and what might happen to both himself and his men, as a result. The best example of this is when he says, “‘Cyclops, if ever mortal man asks you the story of the ugly blinding of your eye, say that Odysseus made you blind, the spoiler of cities, Laertes’ son, whose home is Ithaca.’” (pg. 115) Odysseus was so focused on gaining glory that he deliberately revealed who he was to the Cyclops.

As a result, he brought down calamity upon himself and his men because of Poseidon’s special relationship to the monster. However, by the end of the story, when he reaches Ithaca, the way in which he deliberately bides his time and disguises himself as a beggar instead of rushing into his home and declaring who he was in front of a group of extremely hostile individuals shows how he has developed and changed. In fact, it wasn’t until after Odysseus took the trial of the bow that he ditched his disguise and revealed his true identity, “He spoke, and flung his red cloak from his neck, rising full height. Then wise Odysseus threw off his rags and sprang to the broad threshold, bow in hand and quiver full of arrows.” (pg 271) Instead, he remains anonymous until he confirms that his men are loyal to him and that he is ready to strike. The text, therefore, confirms that Odysseus, as an individual, definitely learns from his mistakes and develops during the course of the epic.

Literary Analysis of the Odyssey