Examples of Odysseus being a Good Leader 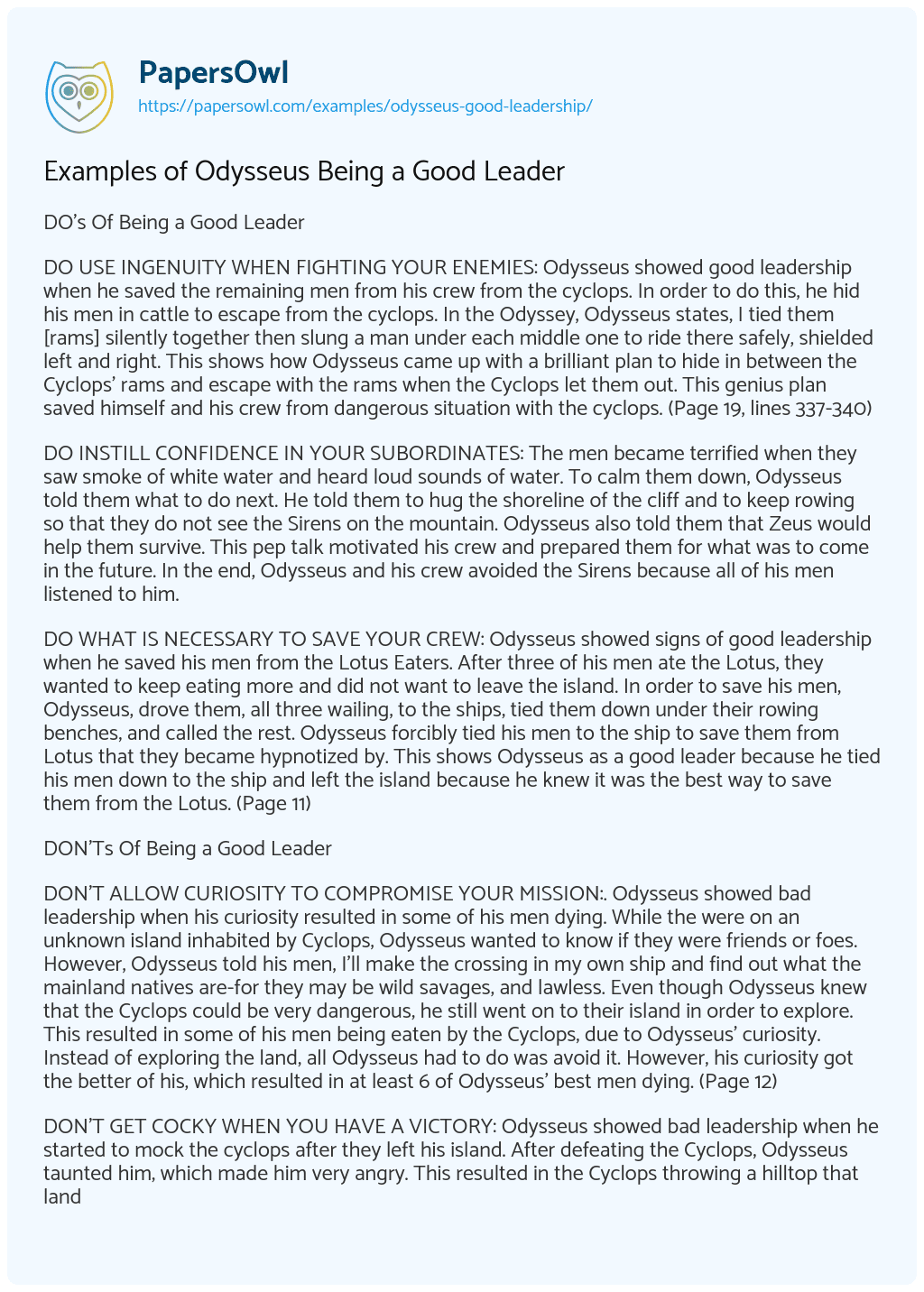 DO’s Of Being a Good Leader

DO USE INGENUITY WHEN FIGHTING YOUR ENEMIES: Odysseus showed good leadership when he saved the remaining men from his crew from the cyclops. In order to do this, he hid his men in cattle to escape from the cyclops. In the Odyssey, Odysseus states, I tied them [rams] silently together then slung a man under each middle one to ride there safely, shielded left and right. This shows how Odysseus came up with a brilliant plan to hide in between the Cyclops’ rams and escape with the rams when the Cyclops let them out. This genius plan saved himself and his crew from dangerous situation with the cyclops. (Page 19, lines 337-340)

DO INSTILL CONFIDENCE IN YOUR SUBORDINATES: The men became terrified when they saw smoke of white water and heard loud sounds of water. To calm them down, Odysseus told them what to do next. He told them to hug the shoreline of the cliff and to keep rowing so that they do not see the Sirens on the mountain. Odysseus also told them that Zeus would help them survive. This pep talk motivated his crew and prepared them for what was to come in the future. In the end, Odysseus and his crew avoided the Sirens because all of his men listened to him.

DO WHAT IS NECESSARY TO SAVE YOUR CREW: Odysseus showed signs of good leadership when he saved his men from the Lotus Eaters. After three of his men ate the Lotus, they wanted to keep eating more and did not want to leave the island. In order to save his men, Odysseus, drove them, all three wailing, to the ships, tied them down under their rowing benches, and called the rest. Odysseus forcibly tied his men to the ship to save them from Lotus that they became hypnotized by. This shows Odysseus as a good leader because he tied his men down to the ship and left the island because he knew it was the best way to save them from the Lotus. (Page 11)

DON’Ts Of Being a Good Leader

DON’T ALLOW CURIOSITY TO COMPROMISE YOUR MISSION:. Odysseus showed bad leadership when his curiosity resulted in some of his men dying. While the were on an unknown island inhabited by Cyclops, Odysseus wanted to know if they were friends or foes. However, Odysseus told his men, I’ll make the crossing in my own ship and find out what the mainland natives are-for they may be wild savages, and lawless. Even though Odysseus knew that the Cyclops could be very dangerous, he still went on to their island in order to explore. This resulted in some of his men being eaten by the Cyclops, due to Odysseus’ curiosity. Instead of exploring the land, all Odysseus had to do was avoid it. However, his curiosity got the better of his, which resulted in at least 6 of Odysseus’ best men dying. (Page 12)

DON’T GET COCKY WHEN YOU HAVE A VICTORY: Odysseus showed bad leadership when he started to mock the cyclops after they left his island. After defeating the Cyclops, Odysseus taunted him, which made him very angry. This resulted in the Cyclops throwing a hilltop that landed right in front of the ship, almost killing them all. Instead of killing Odysseus and his men, the hilltop made a big wave that brought the ships back to shore. Odysseus barely managed to escape this, but his actions put him and his crew at a huge risk. After barely escaping, the Cyclops he placed a curse on Odysseus out of his fury.(Page 21-22)

DON’T LET YOUR CREW TELL YOU WHAT TO DO: Odysseus showed bad leadership with his men and Helios’ cattle. Tiresias warns Odysseus that if his men ate Helios’ cattle, then they would be all be punished with death. However, the Odyssey states, Driven by hunger, they ignore Odysseus’ warning not to fest on Helios’ cattle Zeus sends down a thunderbolt to sink Odysseus’ ship. Since Odysseus could not control his men and make them not eat the cattle, his whole crew died and his ship got destroyed. This shows bad leadership because Odysseus could not persuade his men to not land on the island of Thrinacia, which resulted in all of men dying.

DON’T GET DISTRACTED AND LEAVE A MAN BEHIND: On Circe’s island one man fell off a rooftop drunk and Odysseus and his crew left him behind, Odysseus had to promise him a funeral only after he was reminded he was gone while in the underworld. This was a bad leadership on the part of Odysseus because he was unable to keep track of his men and possibly save and because he did know he needed to give the crewmember a funeral, something he is morally obliged to do.

Idk what to say for this one

DON’T: After Odysseus left Troy, his crew and him went to Ismarus, which was where the Cicones lived. The Cicones were allies with the Trojans, meaning that they were enemies of Odysseus. Odysseus and his crew robbed and killed them on their island. After this victory, they decided to stay on the island a little bit longer to celebrate. However, they Cicones attacked Odysseus’ men and killed 72 of them. If Odysseus looted the city and left, then he could have stolen many things without losing any. (Page 11)

DON’T KEEP SECRETS FROM YOUR MEN:Odysseus showed bad leadership by telling his men nothing about Scylla. Scylla was a huge monster that had twelve large legs like tentacles and 6 heads with fangs. Odysseus knew that he would encounter this monster because Circe warned him about her. However, Odysseus did not disclose any information to his crew. He neglected to tell them anything, which resulted in 6 of his men being eaten. If Odysseus told them what they were going to encounter, then they could’ve been more prepared to fight or avoid this monster.

Odysseus showed good leadership when taking charge of the situation to ensure the safety of his crew. When the cyclops asked Odysseus what his name was, he responded by lying to him by saying his name was Nohbdy to trick the Cyclops. When another cyclops asked the Cyclops that held them prisoners what’s wrong, he responded by saying, Nohbdy, Nobody’s tricked me, Nobody’s ruined me! The other cyclops went on to believe that nobody was there. This allowed Odysseus to save the rest of his men from the other cyclops that would’ve came to kill Odysseus and his men.

Odysseus showed good leadership by telling his men nothing about Scylla. Scylla was a huge monster that had twelve large legs like tentacles and 6 heads with fangs. Odysseus knew that he would encounter this monster because Circe warned him about her. However, Odysseus did not disclose any information to his crew. He neglected to tell them anything, because it would make them lose heart and not want to continue their journey. This showed good leadership because telling his crew would make them scared and possibly refuse to keep going.(Book 12)

Examples of Odysseus Being a Good Leader. (2020, Jan 09). Retrieved from https://papersowl.com/examples/odysseus-good-leadership/

Is Odysseus a Good Leader