An Act of Courage of Rosa Parks 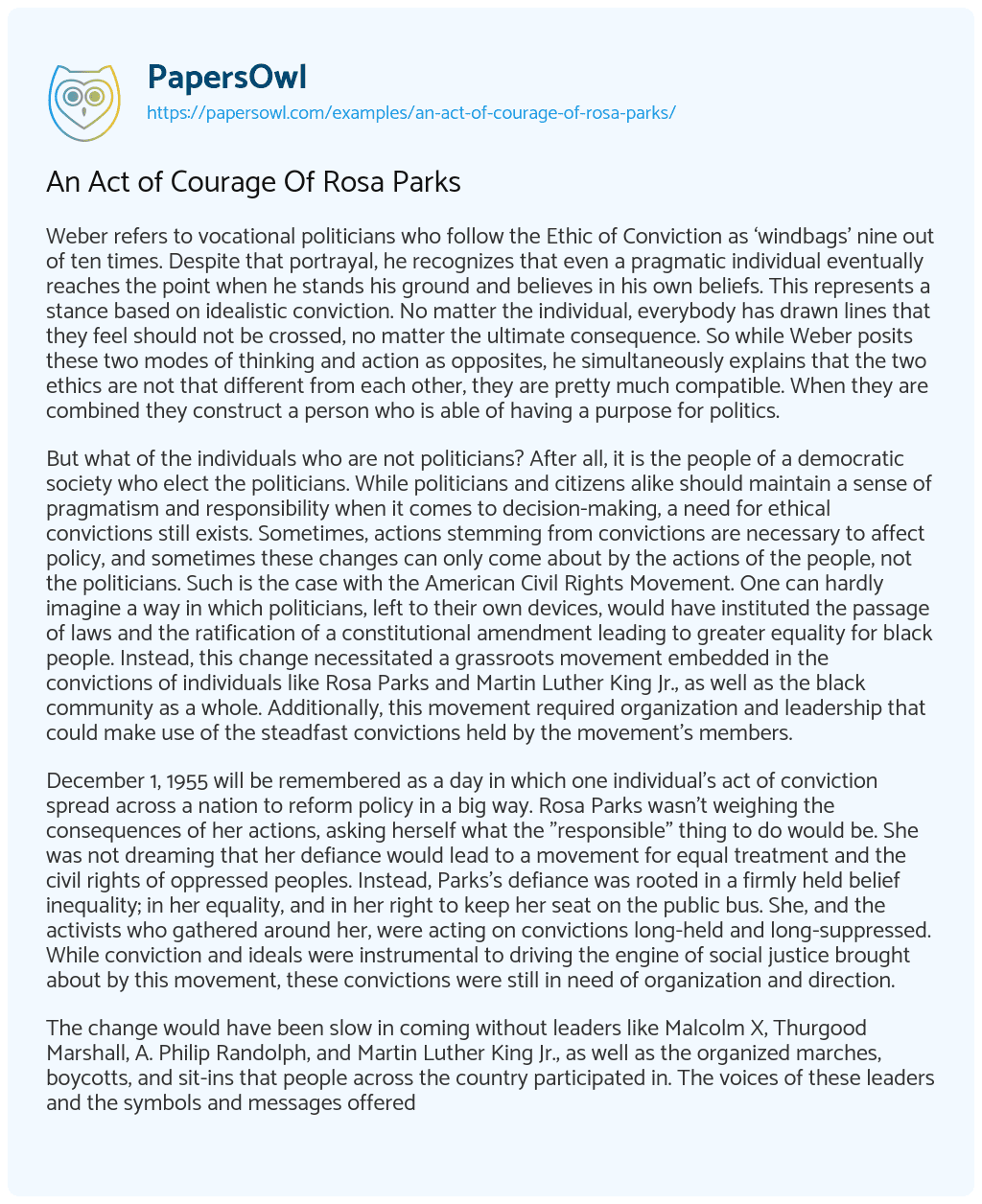 Weber refers to vocational politicians who follow the Ethic of Conviction as ‘windbags’ nine out of ten times. Despite that portrayal, he recognizes that even a pragmatic individual eventually reaches the point when he stands his ground and believes in his own beliefs. This represents a stance based on idealistic conviction. No matter the individual, everybody has drawn lines that they feel should not be crossed, no matter the ultimate consequence. So while Weber posits these two modes of thinking and action as opposites, he simultaneously explains that the two ethics are not that different from each other, they are pretty much compatible. When they are combined they construct a person who is able of having a purpose for politics.

But what of the individuals who are not politicians? After all, it is the people of a democratic society who elect the politicians. While politicians and citizens alike should maintain a sense of pragmatism and responsibility when it comes to decision-making, a need for ethical convictions still exists. Sometimes, actions stemming from convictions are necessary to affect policy, and sometimes these changes can only come about by the actions of the people, not the politicians. Such is the case with the American Civil Rights Movement. One can hardly imagine a way in which politicians, left to their own devices, would have instituted the passage of laws and the ratification of a constitutional amendment leading to greater equality for black people. Instead, this change necessitated a grassroots movement embedded in the convictions of individuals like Rosa Parks and Martin Luther King Jr., as well as the black community as a whole. Additionally, this movement required organization and leadership that could make use of the steadfast convictions held by the movement’s members.

December 1, 1955 will be remembered as a day in which one individual’s act of conviction spread across a nation to reform policy in a big way. Rosa Parks wasn’t weighing the consequences of her actions, asking herself what the “responsible” thing to do would be. She was not dreaming that her defiance would lead to a movement for equal treatment and the civil rights of oppressed peoples. Instead, Parks’s defiance was rooted in a firmly held belief inequality; in her equality, and in her right to keep her seat on the public bus. She, and the activists who gathered around her, were acting on convictions long-held and long-suppressed. While conviction and ideals were instrumental to driving the engine of social justice brought about by this movement, these convictions were still in need of organization and direction.

The change would have been slow in coming without leaders like Malcolm X, Thurgood Marshall, A. Philip Randolph, and Martin Luther King Jr., as well as the organized marches, boycotts, and sit-ins that people across the country participated in. The voices of these leaders and the symbols and messages offered by these demonstrations effectively placed enough pressure on the fabric of society to turn the machinations of legislation. In short, the convictions of the people were made manifest through the power of their organization. No politician who shared this conviction could have possibly—at that point in time—affected the ensuing policy changes brought about by the Civil Rights Movement of the 1950s and 1960s. The overturning of the “separate but equal” doctrine, bus desegregation, and the legalization of interracial marriages was not brought about by the will of politicians and legislatures. These policy changes came from the raw—albeit, strategic—actions that an ethical conviction of equality evoked in myriad groups across the country. Rosa Parks drew a line in the sand and stood up for herself once that line had been crossed. Her convictions were shared by many like her. These like-minded people took the energy fueled by their convictions and formed it into something with the ability to affect social and legislative change. It is unlikely that this policy change could have come at the hands of politicians or legislatures within the paradigm of that time period. So while cultivating an ethic of conviction may make windbags out of most, it makes heroes out of some.

An Act of Courage Of Rosa Parks. (2021, May 25). Retrieved from https://papersowl.com/examples/an-act-of-courage-of-rosa-parks/