Written by Homer, a Bard, the Odyssey 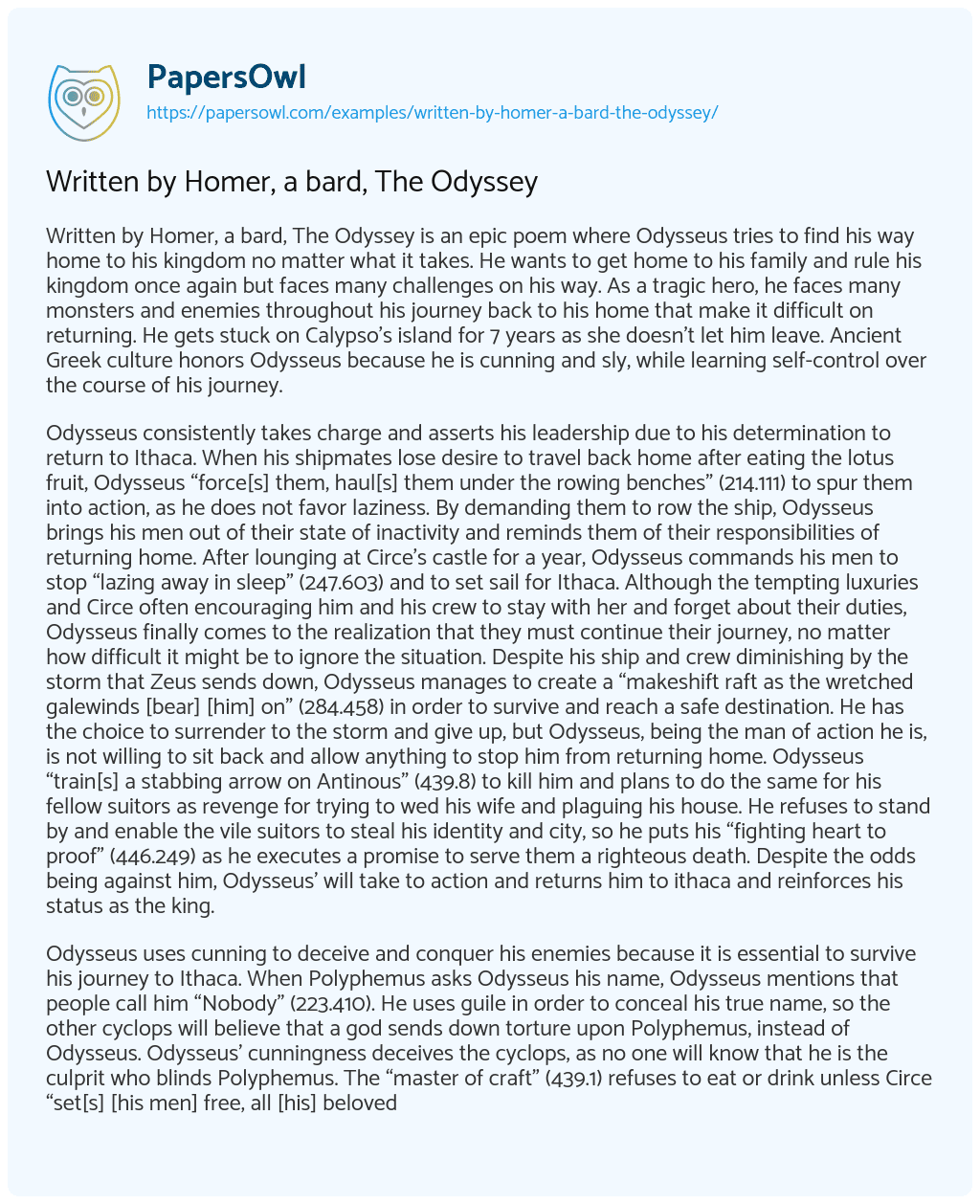 Written by Homer, a bard, The Odyssey is an epic poem where Odysseus tries to find his way home to his kingdom no matter what it takes. He wants to get home to his family and rule his kingdom once again but faces many challenges on his way. As a tragic hero, he faces many monsters and enemies throughout his journey back to his home that make it difficult on returning. He gets stuck on Calypso’s island for 7 years as she doesn’t let him leave. Ancient Greek culture honors Odysseus because he is cunning and sly, while learning self-control over the course of his journey.

Odysseus consistently takes charge and asserts his leadership due to his determination to return to Ithaca. When his shipmates lose desire to travel back home after eating the lotus fruit, Odysseus “force[s] them, haul[s] them under the rowing benches” (214.111) to spur them into action, as he does not favor laziness. By demanding them to row the ship, Odysseus brings his men out of their state of inactivity and reminds them of their responsibilities of returning home. After lounging at Circe’s castle for a year, Odysseus commands his men to stop “lazing away in sleep” (247.603) and to set sail for Ithaca. Although the tempting luxuries and Circe often encouraging him and his crew to stay with her and forget about their duties, Odysseus finally comes to the realization that they must continue their journey, no matter how difficult it might be to ignore the situation. Despite his ship and crew diminishing by the storm that Zeus sends down, Odysseus manages to create a “makeshift raft as the wretched galewinds [bear] [him] on” (284.458) in order to survive and reach a safe destination. He has the choice to surrender to the storm and give up, but Odysseus, being the man of action he is, is not willing to sit back and allow anything to stop him from returning home. Odysseus “train[s] a stabbing arrow on Antinous” (439.8) to kill him and plans to do the same for his fellow suitors as revenge for trying to wed his wife and plaguing his house. He refuses to stand by and enable the vile suitors to steal his identity and city, so he puts his “fighting heart to proof” (446.249) as he executes a promise to serve them a righteous death. Despite the odds being against him, Odysseus’ will take to action and returns him to ithaca and reinforces his status as the king.

Odysseus uses cunning to deceive and conquer his enemies because it is essential to survive his journey to Ithaca. When Polyphemus asks Odysseus his name, Odysseus mentions that people call him “Nobody” (223.410). He uses guile in order to conceal his true name, so the other cyclops will believe that a god sends down torture upon Polyphemus, instead of Odysseus. Odysseus’ cunningness deceives the cyclops, as no one will know that he is the culprit who blinds Polyphemus. The “master of craft” (439.1) refuses to eat or drink unless Circe “set[s] [his men] free, all [his] beloved comrades” (242.426). His cunning tactic works in his favor since Circe will grant him his wish, while her wish will be fulfilled as well. Odysseus’ cleverness allows him to gain back his men without having to harm anyone in the process. As he arrives to Ithaca, Odysseus wears “squalid rags” (300.497) and holds “a staff and beggar’s sack” (300.500) in order to disguise himself. He is dressed as a beggar because he does not want anyone, especially the suitors, to know that he has returned, so he can observe his household and properly plan the suitors’ demise. Guile is a tactic Odysseus uses often in order to defeat his opponents and execute his plans, without harming himself along the way.

Despite Odysseus’ impulsiveness in stressful situations, over the course of his journey, he learns how to control his anger and restrain himself. As Odysseus and his men leave Polyphemus’ cave, his recklessness drives him to call Polyphemus a “shameless cannibal,” (226.534) catching his crew’s attention, who beg him to control his frustration but “could not bring [his] fighting spirit around” (227.567). Despite their efforts to minimize Odysseus’ anger, he does not listen and continues to shout at the Cyclops, with no regard of his self-control. When Melanthius and Odysseus (in the form of a beggar) come face to face, Melanthius tests Odysseus’ self-control when he “lurche[s] out with a heel and kick[s] his hip” (361.255). The once reckless man contemplates whether he should “split his skull on the rocks” (362.259) but keeps “his mind in full control” (362.260). As hard as it is for him to contain his rage, Odysseus suppresses his anger and finds a new sense of control within himself. Odysseus’ “heart inside him growl[s] in rage” (410.15) as he debates whether he should rush up to the amids who sleep with the suitors and kill them. However, his newfound self-control leads him to “[strike] his chest and [curb] his fighting heart” (411.19). He has learned how to manage his temper after his many experiences of recklessness teach him the consequences of such acts. As a part of his hero’s journey, Odysseus learns from his foolish mistakes and turns them into hard-won self restraint.

Odysseus reflects values of the ancient Greek culture as he uses cunning because he takes action to overcome throughout his journey, learning self-control along the away. After being held captive on Calypso’s island, Hermes rescues him and Odysseus sets sail for a long hard journey back to his home, Ithaca. During this time, his wife and son must deal with the horrendous mob of suitors encroaching the castle. Odysseus and his loyal companions kill all the suitors and Odysseus brings peace to the castle as he is ruler again. People admire heroes because they reflect the values and ideals of their society, but also learn from their weaknesses.”

Written by Homer, a bard, The Odyssey. (2021, Jun 17). Retrieved from https://papersowl.com/examples/written-by-homer-a-bard-the-odyssey/

Theme of Leadership in “The Odyssey” by Homer