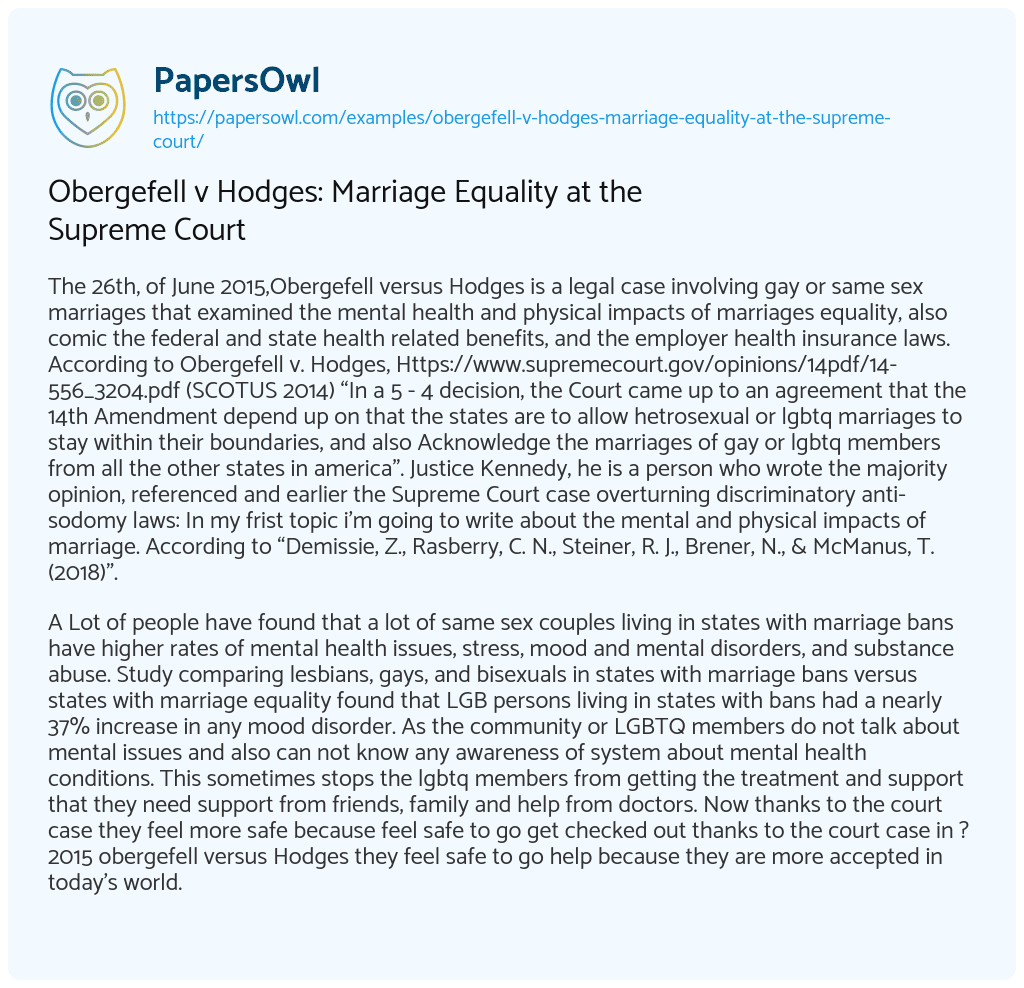 The 26th, of June 2015,Obergefell versus Hodges is a legal case involving gay or same sex marriages that examined the mental health and physical impacts of marriages equality, also comic the federal and state health related benefits, and the employer health insurance laws. According to Obergefell v. Hodges, Https://www.supremecourt.gov/opinions/14pdf/14-556_3204.pdf (SCOTUS 2014) “In a 5 – 4 decision, the Court came up to an agreement that the 14th Amendment depend up on that the states are to allow hetrosexual or lgbtq marriages to stay within their boundaries, and also Acknowledge the marriages of gay or lgbtq members from all the other states in america”. Justice Kennedy, he is a person who wrote the majority opinion, referenced and earlier the Supreme Court case overturning discriminatory anti-sodomy laws: In my frist topic i’m going to write about the mental and physical impacts of marriage. According to “Demissie, Z., Rasberry, C. N., Steiner, R. J., Brener, N., & McManus, T. (2018)”.

A Lot of people have found that a lot of same sex couples living in states with marriage bans have higher rates of mental health issues, stress, mood and mental disorders, and substance abuse. Study comparing lesbians, gays, and bisexuals in states with marriage bans versus states with marriage equality found that LGB persons living in states with bans had a nearly 37% increase in any mood disorder. As the community or LGBTQ members do not talk about mental issues and also can not know any awareness of system about mental health conditions. This sometimes stops the lgbtq members from getting the treatment and support that they need support from friends, family and help from doctors. Now thanks to the court case they feel more safe because feel safe to go get checked out thanks to the court case in ?2015 obergefell versus Hodges they feel safe to go help because they are more accepted in today’s world.

Decision by the Supreme Court of United States

Marriage as a Union between One Man and One Woman