Marriage as a Union between One Man and One Woman 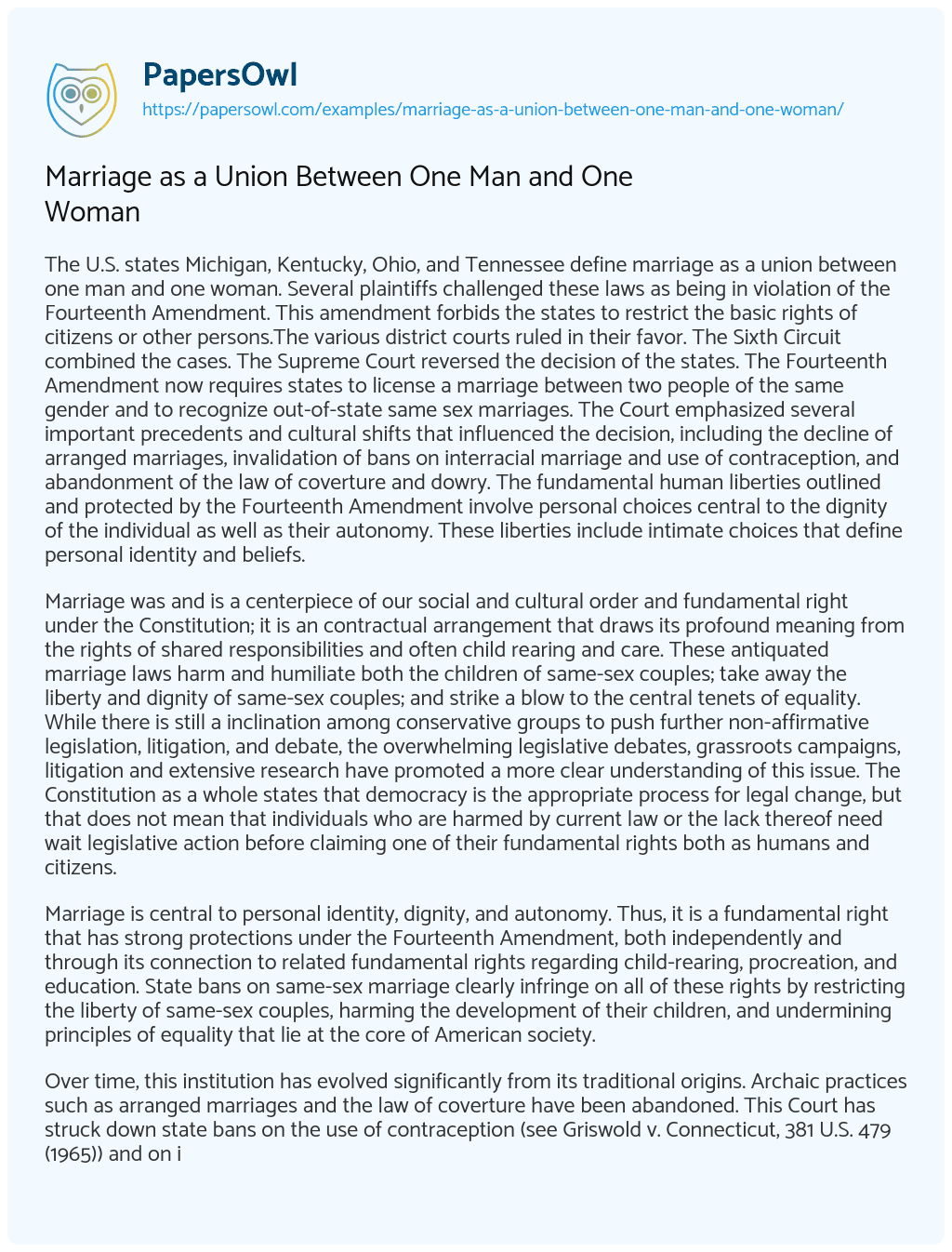 The U.S. states Michigan, Kentucky, Ohio, and Tennessee define marriage as a union between one man and one woman. Several plaintiffs challenged these laws as being in violation of the Fourteenth Amendment. This amendment forbids the states to restrict the basic rights of citizens or other persons.The various district courts ruled in their favor. The Sixth Circuit combined the cases. The Supreme Court reversed the decision of the states. The Fourteenth Amendment now requires states to license a marriage between two people of the same gender and to recognize out-of-state same sex marriages. The Court emphasized several important precedents and cultural shifts that influenced the decision, including the decline of arranged marriages, invalidation of bans on interracial marriage and use of contraception, and abandonment of the law of coverture and dowry. The fundamental human liberties outlined and protected by the Fourteenth Amendment involve personal choices central to the dignity of the individual as well as their autonomy. These liberties include intimate choices that define personal identity and beliefs.

Marriage was and is a centerpiece of our social and cultural order and fundamental right under the Constitution; it is an contractual arrangement that draws its profound meaning from the rights of shared responsibilities and often child rearing and care. These antiquated marriage laws harm and humiliate both the children of same-sex couples; take away the liberty and dignity of same-sex couples; and strike a blow to the central tenets of equality. While there is still a inclination among conservative groups to push further non-affirmative legislation, litigation, and debate, the overwhelming legislative debates, grassroots campaigns, litigation and extensive research have promoted a more clear understanding of this issue. The Constitution as a whole states that democracy is the appropriate process for legal change, but that does not mean that individuals who are harmed by current law or the lack thereof need wait legislative action before claiming one of their fundamental rights both as humans and citizens.

Marriage is central to personal identity, dignity, and autonomy. Thus, it is a fundamental right that has strong protections under the Fourteenth Amendment, both independently and through its connection to related fundamental rights regarding child-rearing, procreation, and education. State bans on same-sex marriage clearly infringe on all of these rights by restricting the liberty of same-sex couples, harming the development of their children, and undermining principles of equality that lie at the core of American society.

Over time, this institution has evolved significantly from its traditional origins. Archaic practices such as arranged marriages and the law of coverture have been abandoned. This Court has struck down state bans on the use of contraception (see Griswold v. Connecticut, 381 U.S. 479 (1965)) and on interracial marriage (see Loving v. Virginia, 388 U.S. 1 (1967)). There is no longer a reason to hesitate before recognizing the right of same-sex couples to marriage equality, for the merits of the issue have become abundantly clear through legislative debates, academic research, and a long history of litigation. Legislative action through the democratic process is the usual mechanism for change, but courts may intervene on behalf of people whose fundamental rights have been infringed. Granting marriage equality to same-sex couples accords them the equal dignity under the law to which they are constitutionally entitled.

This is a policy decision that should be left to legislatures, as demonstrated by the writings of the Framers and earlier decisions of this Court. The majority has engaged in inappropriate judicial activism by taking this issue out of their hands. States should be free to define marriage as they see fit. The majority’s decision threatens the democratic principles at the core of American society by allowing the judgment of an elite few to substitute for the will of the many. The majority distorts the principles expressed by the Framers of the Constitution by portraying human dignity as granted by the government rather than emanating from the individual. The Constitution is meant to provide freedom from government intervention rather than the right to receive a government entitlement.

There is no textual basis in the Constitution or the history surrounding it that prevents states from developing their own definitions of marriage. Rather than focusing on what the states are constitutionally required to do, the majority substitutes a more nebulous view of what they should do, which is not within the Court’s power to determine.

There are several reasons why I support marriage equality. My rationale includes both psychological as well as sociological, legal, ethical, and statistical reasons. Discrimination is obviously detrimental to one’s mental health. When we make committed human connections our physical and mental health improves. Forming families, traditional or not, is beneficial because it creates support systems and a sense of stability. Marriage is not only a basic human right but also an extremely personal individual choice and as such should not be interfered in by the State, excluding cases of abuse or coercion. Homosexuality is a normal variant on the spectrum of human sexuality; people in the LGBTQ+ community possess the same desire and potential for long term, loving, and mutually beneficial relationships as heterosexual and cisgender people. This potential includes loving and parenting children. Discriminatory marriage laws deprive gay and lesbian couples of over 1000 federal rights and benefits. The deprivation of these benefits and rights has demonstrable negative psychological and social impact on same sex couples, as well as their children and families. Change and adaptation are essential to the formation of stronger and psychologically richer societies. Same sex couples also can help promote the reduction of gender based power dynamics in heterosexual relationships. Couples unfettered by gender bias tend to solve problems and make decisions with more respect and mutuality. Ending discrimination makes all our lives better by promoting love and respect for all.

Prohibiting gay and lesbian couples from marrying is inherently discriminatory and therefore violates the US Constitution’s 14th Amendment. The 14th Amendment’s Equal Protection Clause, guarantees equal protection under all laws to all people. All people means all people- it should not exclude those whose are not heterosexual or cisgender. The 14th Amendment’s also has a Due Process Clause. This clause states that no group should be unlawfully denied a fundamental right. In 1967, the Supreme Court incorporated both of these standards in Loving v. Virginia when the court decided that the 14th Amendment prohibits states from preventing interracial marriage. The majority of the Supreme Court justices decided that these arguments could be applied similarly to the states’ same-sex marriage bans, concluding that marriage is a fundamental human right, the bans were both unconstitutional and discriminatory, and that states must carry out and recognize same-sex marriages.

The decision of the Supreme Court on the case of Obergefell v. Hodges essentially ended the nationwide debate over whether same-sex marriage is legal or constitutionally required. It has unfortunately still has not eradicated discriminatory practices, however, but the decision is still a step on the path towards safety and equality for all LGBTQ+ Americans. This landmark trial also marks the end goal of the previous 20-year process in which the Court slowly expanded the legal rights of America’s LGBTQ+ community. One of these cases is Romer v. Evans (517 U.S. 620, 1996)which stated that States may not openly deny protected status to individuals based on sexual orientation.

Another case was Lawrence v. Texas, (539 U.S. 558, 2003): Sexual intercourse between members of the same sex is legal throughout the U.S. as a constitutional right. The most recent previous to Obergefell v. Hodges was U.S. v. Windsor (570 U.S., 2013) which decided that the federal government may not restrict its definition of marriage to heterosexual relationships.”

Marriage as a Union Between One Man and One Woman. (2021, May 10). Retrieved from https://papersowl.com/examples/marriage-as-a-union-between-one-man-and-one-woman/