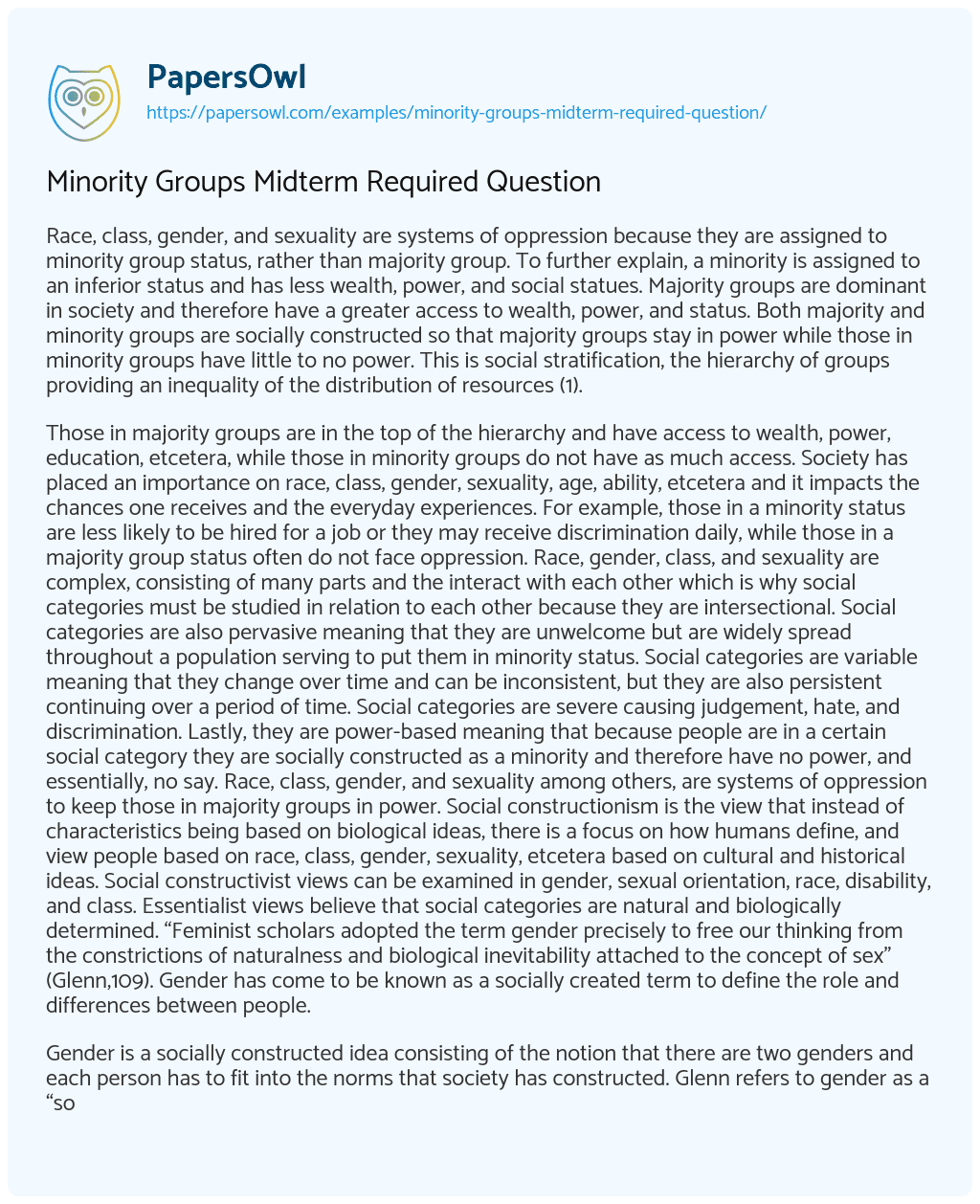 Those in majority groups are in the top of the hierarchy and have access to wealth, power, education, etcetera, while those in minority groups do not have as much access. Society has placed an importance on race, class, gender, sexuality, age, ability, etcetera and it impacts the chances one receives and the everyday experiences. For example, those in a minority status are less likely to be hired for a job or they may receive discrimination daily, while those in a majority group status often do not face oppression. Race, gender, class, and sexuality are complex, consisting of many parts and the interact with each other which is why social categories must be studied in relation to each other because they are intersectional. Social categories are also pervasive meaning that they are unwelcome but are widely spread throughout a population serving to put them in minority status. Social categories are variable meaning that they change over time and can be inconsistent, but they are also persistent continuing over a period of time. Social categories are severe causing judgement, hate, and discrimination. Lastly, they are power-based meaning that because people are in a certain social category they are socially constructed as a minority and therefore have no power, and essentially, no say. Race, class, gender, and sexuality among others, are systems of oppression to keep those in majority groups in power. Social constructionism is the view that instead of characteristics being based on biological ideas, there is a focus on how humans define, and view people based on race, class, gender, sexuality, etcetera based on cultural and historical ideas. Social constructivist views can be examined in gender, sexual orientation, race, disability, and class. Essentialist views believe that social categories are natural and biologically determined. “Feminist scholars adopted the term gender precisely to free our thinking from the constrictions of naturalness and biological inevitability attached to the concept of sex” (Glenn,109). Gender has come to be known as a socially created term to define the role and differences between people.

Gender is a socially constructed idea consisting of the notion that there are two genders and each person has to fit into the norms that society has constructed. Glenn refers to gender as a “social status and identity” (110). Given this information it is easy to see how socially constructing gender based on societal norms marginalizes those who do not fit into those norms. The gender norms for women are based on the historical concepts that they should have children, they should be married, they should stay at home to take care of the children, they should cook, they should clean the house, and they should do what their husband says. Although we have progressed, women are still paid less and are often not offered higher positions in companies because of their gender and the socially constructed idea of what it means to be their gender. For men, they are expected to provide for the family and to not show emotion, again, based on the socially constructed idea of gender. According to essentialism, men and women are different because of biological differences that are fixed. This concept is used as justification for women receiving lower pay by reinforcing the stereotype that women are inferior to men and should be paid less reinforcing inequality in gender.

Patriarchy or the idea that men should be the head of households reinforces this idea. Gender and class are intersectional in that men have more power and a higher class. Socially constructed views about those in poverty show that they should have less of a say and they are more marginalized because they may not have access to public services or political systems. Class is a socially constructed view because women are always a lower class than men, and the voice of those who are not as well off does not matter. Essentialists argue that class is biologically determined. This creates inequality because not everyone is of a higher class and it reinforces the idea that men are superior because it is biological and those in poverty are not because that is what is natural. Society stereotypes people with disabilities and believe that they are not capable to fully participate in society. Society is constructed based on the assumption that everyone is healthy. “Society regards disability as a private matter, and people with disabilities as belonging in the private sphere, the more disability it creates by failing to make the public sphere accessible to a wide range of people” (Wendell. 42-43). Disabled people are marginalized because they might need extra assistance and it may prevent them from gaining a job or education. Societies construction of disability is the view that disabled people cannot meet social expectations of performance (Wendell 43). Essentialist arguments of disabilities show that if someone is disabled, they are less capable of living a normal life because of biological differences between those who are not disabled. This fosters inequality because essentialism supports stereotypes that disabled people cannot be productive members of society. Race is a category used to divide individuals by skin color and appearance. Race was first used to justify exploitation and enslavement of others by Europeans. Race is used as a socially constructed idea to keep whites socially dominant and those that were enslaved segregated and in a lower position.

Race has also historically been equated to black male and gender for white female, excluding black females. So black females are the most marginalized because they are both black and female so in society’s view, they are lesser. Race is a socially constructed view to keep people who are not classified as white in lower positions because they look different. Essentialist views of race contribute to the idea that those who are not white are inferior based on their race. Those in minority racial categories have attributes and stereotypes that are natural to them and are used as justification toward discriminating them. Question # 2 Identity is one’s position or social location in relationships, social structures, and societal institutions. Identities are fluid and are continually formed depending on a person’s location. Each person’s identity is also unique. “Identity consists of two parts: (1) the self or our self-definition and (2) the perception of how others see us” (148). Self-identification are characteristics to describe who they are such as outgoing, a sister, a dancer, or liking to wear cute clothes. They can be personal characteristics, social roles, activities, preferences, hopes, fears, or descriptions. Each person has an identity the create and ways to describe themselves, but society also has a way of identifying people. Race, gender, sexuality, disability, etcetera are all parts of our identity. “A person’s race and ethnicity influences where she is likely to be. They also predict her health and wealth as well as the quality of schools, neighborhoods, workplaces, medical care, and other life outcomes she is likely to have access to” (159). Identities are correlated to the distribution of resources and the opportunities one receives.

Stereotypes impact identities because behavior is influenced by ideas and practices of each identity. The stereotype threat is when people feel like they have to conform to the stereotypes in their social categories. For example, a stereotype is that men are smarter than women. Women may feel the need to conform to this stereotype and may even pretend not to be as smart so that they fit in with what society has constructed to be true. There are assumptions that surround identities and they can have negative consequences. An example of an assumption would be an Asian American that has only ever lived in America. People may assume that this person may speak another language or assume that they spent their life in an Asian country. By asking an Asian America “where are you really from?” people assume that they have ethnic ties, when they may not. Identity also relates to “passing” in terms of expectations, motives, and lived experiences.

Passing is an attempt to present oneself in a way that is socially positive to minimize negative stereotypes people may have towards them. Some people who may be from a particular culture may be able to “pass” into another culture and not be recognized as being different. Passing can be used for all social categories. One who is religious may pass as an atheist by wearing anti-religious clothing in order to fit in. One who is well-off may pass for being homeless in order to make money. Someone who is Columbian but has light skin might choose to pass as white to avoid discrimination. People with a less severe disability may be able to pass as non-disable to avoid discrimination. However, passing can lead to resentment from those who cannot pass. Passing is choosing to have another identity that is more positively viewed rather than the identity that is actually true. People choose to pass to fit into societies expectations of what is normal or better, even though some of these ideas are socially constructed. The motives behind passing are to fit in and to avoid negative stereotypes and discrimination. Those who can pass have a widely different lived experience compared to those who cannot. People who cannot pass are stuck with their identity and have to continuously be discriminated against. Those who do pass may feel denial of who they really are.

The Concept of Diversity Among Various Groups