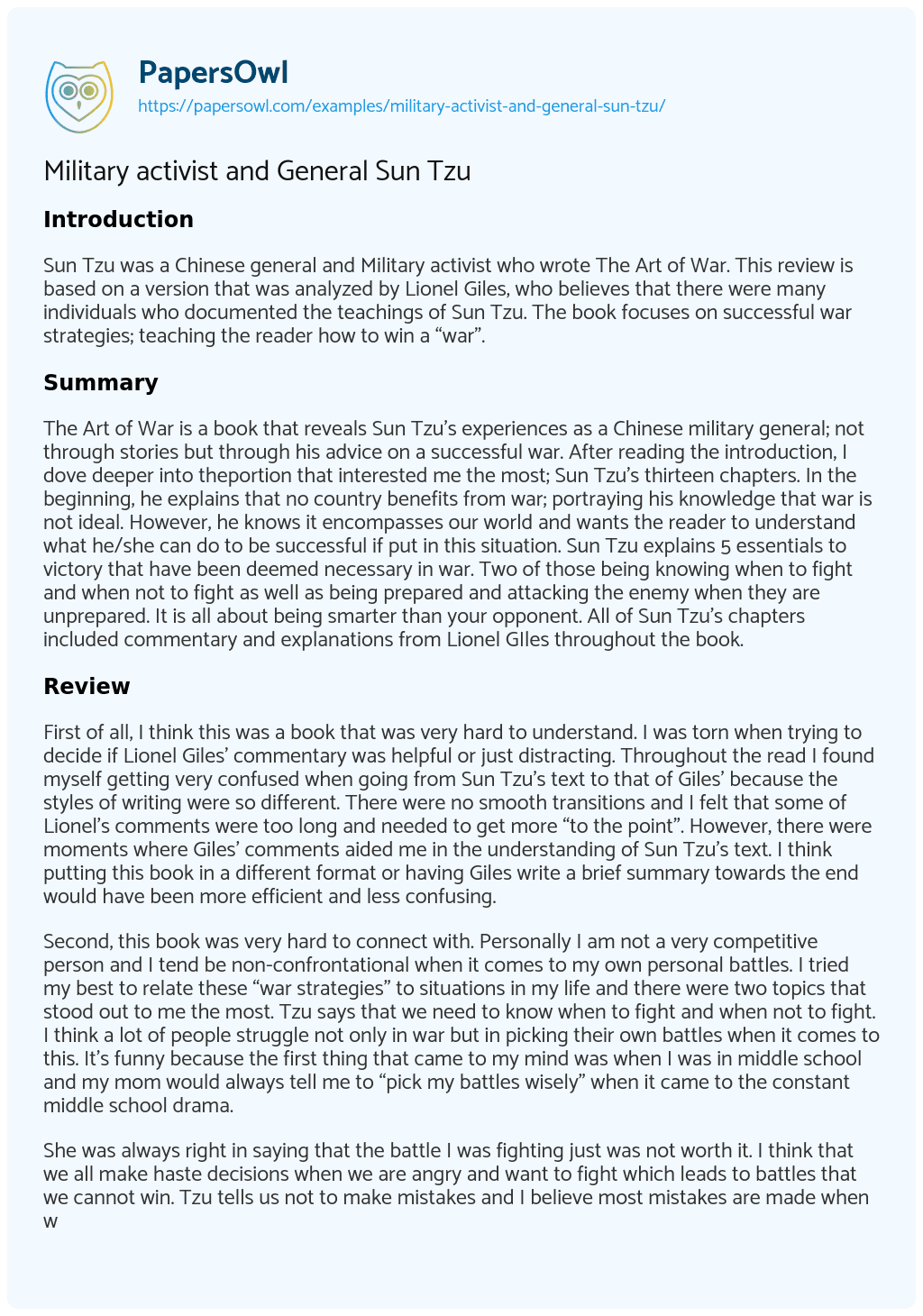 Sun Tzu was a Chinese general and Military activist who wrote The Art of War. This review is based on a version that was analyzed by Lionel Giles, who believes that there were many individuals who documented the teachings of Sun Tzu. The book focuses on successful war strategies; teaching the reader how to win a “war”.

The Art of War is a book that reveals Sun Tzu’s experiences as a Chinese military general; not through stories but through his advice on a successful war. After reading the introduction, I dove deeper into theportion that interested me the most; Sun Tzu’s thirteen chapters. In the beginning, he explains that no country benefits from war; portraying his knowledge that war is not ideal. However, he knows it encompasses our world and wants the reader to understand what he/she can do to be successful if put in this situation. Sun Tzu explains 5 essentials to victory that have been deemed necessary in war. Two of those being knowing when to fight and when not to fight as well as being prepared and attacking the enemy when they are unprepared. It is all about being smarter than your opponent. All of Sun Tzu’s chapters included commentary and explanations from Lionel GIles throughout the book.

First of all, I think this was a book that was very hard to understand. I was torn when trying to decide if Lionel Giles’ commentary was helpful or just distracting. Throughout the read I found myself getting very confused when going from Sun Tzu’s text to that of Giles’ because the styles of writing were so different. There were no smooth transitions and I felt that some of Lionel’s comments were too long and needed to get more “to the point”. However, there were moments where Giles’ comments aided me in the understanding of Sun Tzu’s text. I think putting this book in a different format or having Giles write a brief summary towards the end would have been more efficient and less confusing.

Second, this book was very hard to connect with. Personally I am not a very competitive person and I tend be non-confrontational when it comes to my own personal battles. I tried my best to relate these “war strategies” to situations in my life and there were two topics that stood out to me the most. Tzu says that we need to know when to fight and when not to fight. I think a lot of people struggle not only in war but in picking their own battles when it comes to this. It’s funny because the first thing that came to my mind was when I was in middle school and my mom would always tell me to “pick my battles wisely” when it came to the constant middle school drama.

She was always right in saying that the battle I was fighting just was not worth it. I think that we all make haste decisions when we are angry and want to fight which leads to battles that we cannot win. Tzu tells us not to make mistakes and I believe most mistakes are made when we rush our decisions. A lesson here could be that we all need to learn patience. This also can relate to something that I thought was a theme in the book which was to be smarter than your enemy. This is very important in a battle because having smarter strategies will almost always outweigh the enemies quickly drawn-out plan.

The other topic that stuck to me was when Tzu said that in war there are no more than 5 music notes, but the combinations of these notes give rise to more melodies than ever before. Giles’ commentary on this lead me to unanswered questions so I decided to make my own interpretation. I think that when we are in a war or battle in life we tend to overcomplicate things. We try to bring in ideas and materials that are unnecessary for the task at hand. We need to make more simple decisions and realize all we need to succeed is right in front of us.

Overall, I thought that this book prompted me to rethink certain “battles” that may not be worth it. I thought that at times Giles did help clarify certain ideas but the format of this book left me confused. Even though at first I could not relate much to the overall idea of the book, I was able to think of situations in my life that helped me understand it a little more. This is definitely a difficult read but I recommend this for someone struggling with war or “battles” in their life.

How Current Military Approach Reduces the Risk of Sexual Assault

What is the Importance of Order in General

Should Military Service be Mandatory

The Rise of Sexual Assault in the Military