The Book Dibs: in Search of Self 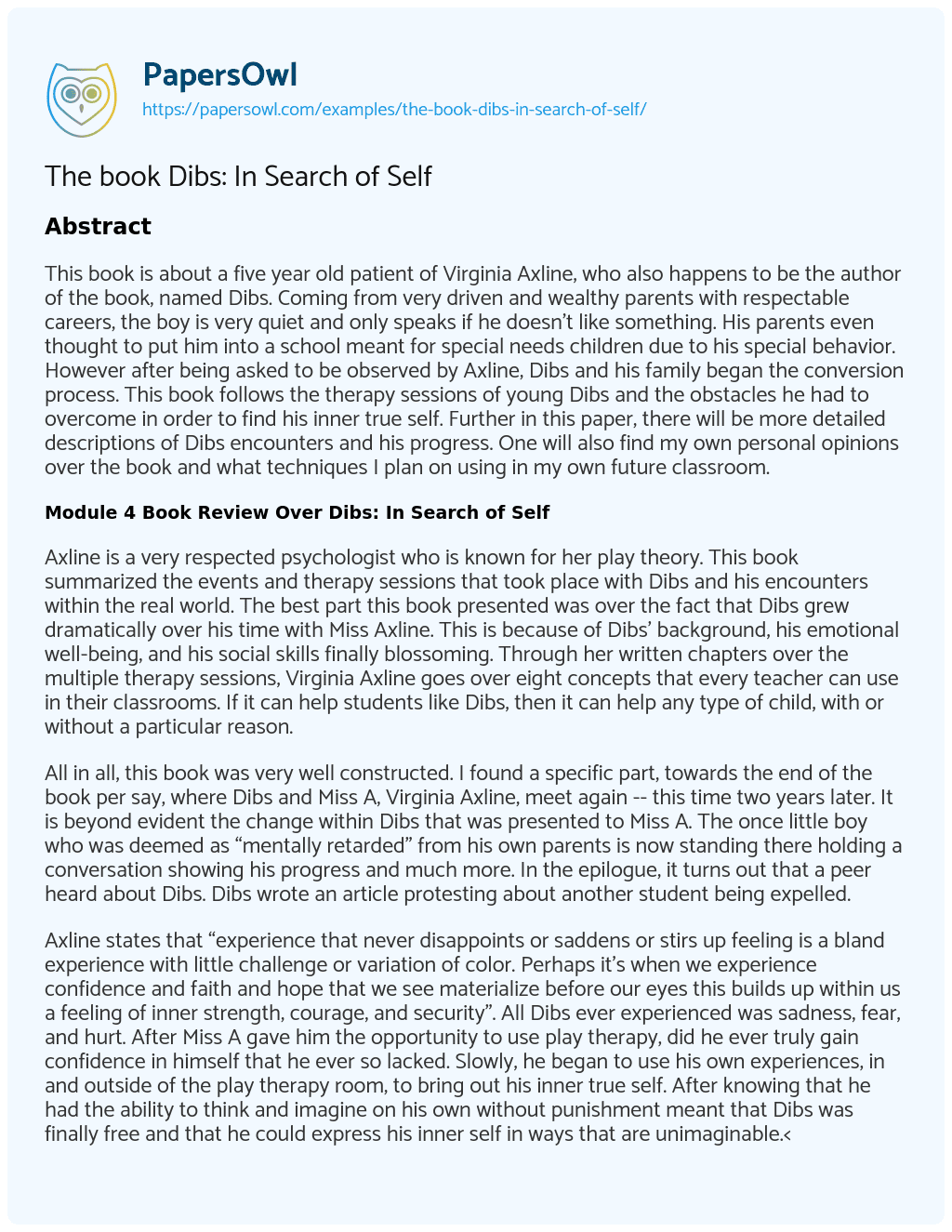 This book is about a five year old patient of Virginia Axline, who also happens to be the author of the book, named Dibs. Coming from very driven and wealthy parents with respectable careers, the boy is very quiet and only speaks if he doesn’t like something. His parents even thought to put him into a school meant for special needs children due to his special behavior. However after being asked to be observed by Axline, Dibs and his family began the conversion process. This book follows the therapy sessions of young Dibs and the obstacles he had to overcome in order to find his inner true self. Further in this paper, there will be more detailed descriptions of Dibs encounters and his progress. One will also find my own personal opinions over the book and what techniques I plan on using in my own future classroom.

Module 4 Book Review Over Dibs: In Search of Self

Axline is a very respected psychologist who is known for her play theory. This book summarized the events and therapy sessions that took place with Dibs and his encounters within the real world. The best part this book presented was over the fact that Dibs grew dramatically over his time with Miss Axline. This is because of Dibs’ background, his emotional well-being, and his social skills finally blossoming. Through her written chapters over the multiple therapy sessions, Virginia Axline goes over eight concepts that every teacher can use in their classrooms. If it can help students like Dibs, then it can help any type of child, with or without a particular reason.

All in all, this book was very well constructed. I found a specific part, towards the end of the book per say, where Dibs and Miss A, Virginia Axline, meet again — this time two years later. It is beyond evident the change within Dibs that was presented to Miss A. The once little boy who was deemed as “mentally retarded” from his own parents is now standing there holding a conversation showing his progress and much more. In the epilogue, it turns out that a peer heard about Dibs. Dibs wrote an article protesting about another student being expelled.

Axline states that “experience that never disappoints or saddens or stirs up feeling is a bland experience with little challenge or variation of color. Perhaps it’s when we experience confidence and faith and hope that we see materialize before our eyes this builds up within us a feeling of inner strength, courage, and security”. All Dibs ever experienced was sadness, fear, and hurt. After Miss A gave him the opportunity to use play therapy, did he ever truly gain confidence in himself that he ever so lacked. Slowly, he began to use his own experiences, in and outside of the play therapy room, to bring out his inner true self. After knowing that he had the ability to think and imagine on his own without punishment meant that Dibs was finally free and that he could express his inner self in ways that are unimaginable.

Throughout this entire book, Axline went into detail about her one hour Thursday sessions with an almost mute and emotionally disturbed Dibs. It brought me much joy to see the journey that Dibs has travelled throughout the beginning, middle, and end of the book. From hiding under a desk and not speaking, to now writing about his emotional standpoint on one of his peers. The evolution that Miss A provided Dibs allowed the readers to see how much change was truly necessary for the young boy. While reading, I thought about how a child with such a high IQ, 168 to be exact, fail to communicate, want to play, or even make some form of interactions.

The readers find out later that Dibs was a product of emotional trauma. His parents put their anger or sadness from their marriage onto him, which is evident as Dibs was playing with toys that he could imagine resembling people that he knew. “A child, given the opportunity, has the gift of honest, forthright communication. A mother who is respected and accepted with dignity can also be sincerely expressive when she knows that she will not be criticized and blamed” (p. 220). This is why the ending meant so much to me. In order for Dibs to find himself, his family had to heal and work together as well. The growth that was presented in Dibs meant that not only did he become a better self, but his family is now stable and giving him everything he ever deserved.

Virginia Axline had a theory that she tested with Dibs. It is known that non-directive play therapy is an idea that children between the ages of three and eleven can tell their own stories and feelings from playing. Playing is an all-natural and self-healing process important for children to grow their communication skills, whether it be for themselves or others. Play is an essential part of childhood growth not just to build communication, but to build relationships which is why it is considered so therapeutic. Through the play theory, Miss A was able to observe Dibs to find out what was causing his behavior. She tells of eight basic concepts that she follows during her time allotted with Dibs.

In my own personal opinion, I believe that I can use her eight concepts in my own classroom in order to get children like Dibs to blossom and identify their own forms of self. The first is to establish a nice relationship as soon as she can, and by this she takes note of his intelligence. She then goes to accept what the child is for who he is. The third is to make sure that Dibs felt free while playing and in the presence of Miss A. Axline herself stated that “it would have been so easy to take him in my arms and console him, to extend the hour, to try overtly to give him a demonstration of affection and sympathy. But of what value would it have been to add additional emotional problems to this child’s life”. This meant that Miss A had to follow her fourth and fifth concepts where she needs to realize when the child produces a feeling that could give insight on why he is acting a certain way. If a problem were to arise then she shall not interfere as Dibs should be given the opportunity to figure it out for himself. Miss A is not even allowed to give directions when it comes to the conversation or play, as the sixth concept states.

The seventh concept is that she shouldn’t rush or slow the progress, but rather let it go as it should. Finally, the last stage is that Miss A set very little limitations unless it was necessary for the real world. All of these concepts prove to let Dibs express himself in ways he didn’t know how to beforehand. If these eight concepts could change students like Dibs, then imagine what it could do to other students in the classroom who are seriously needing the help.

Miss A has presented a lot of information in Dibs: In Search of Self on how to use play therapy to dissect, digest, and develop a person with a newfound independence and courage. Her eight step theory can go beyond those who have just experienced some form of trauma. All students should be able to follow through with the independence and individualism presented throughout the play theory. Play is a great staple in child development, so everyone should use it to the child’s advantage by allowing them to find their inner selves without an interference through something that comes as naturally as play.

The book Dibs: In Search of Self. (2021, Oct 16). Retrieved from https://papersowl.com/examples/the-book-dibs-in-search-of-self/

Book Review of the Immortal Life of Henrietta Lacks

Critical Book Review of the Giver by Lois Lowry

Together is an Information Guide Book by Author John J.

“Whose Child am I?” Book Review