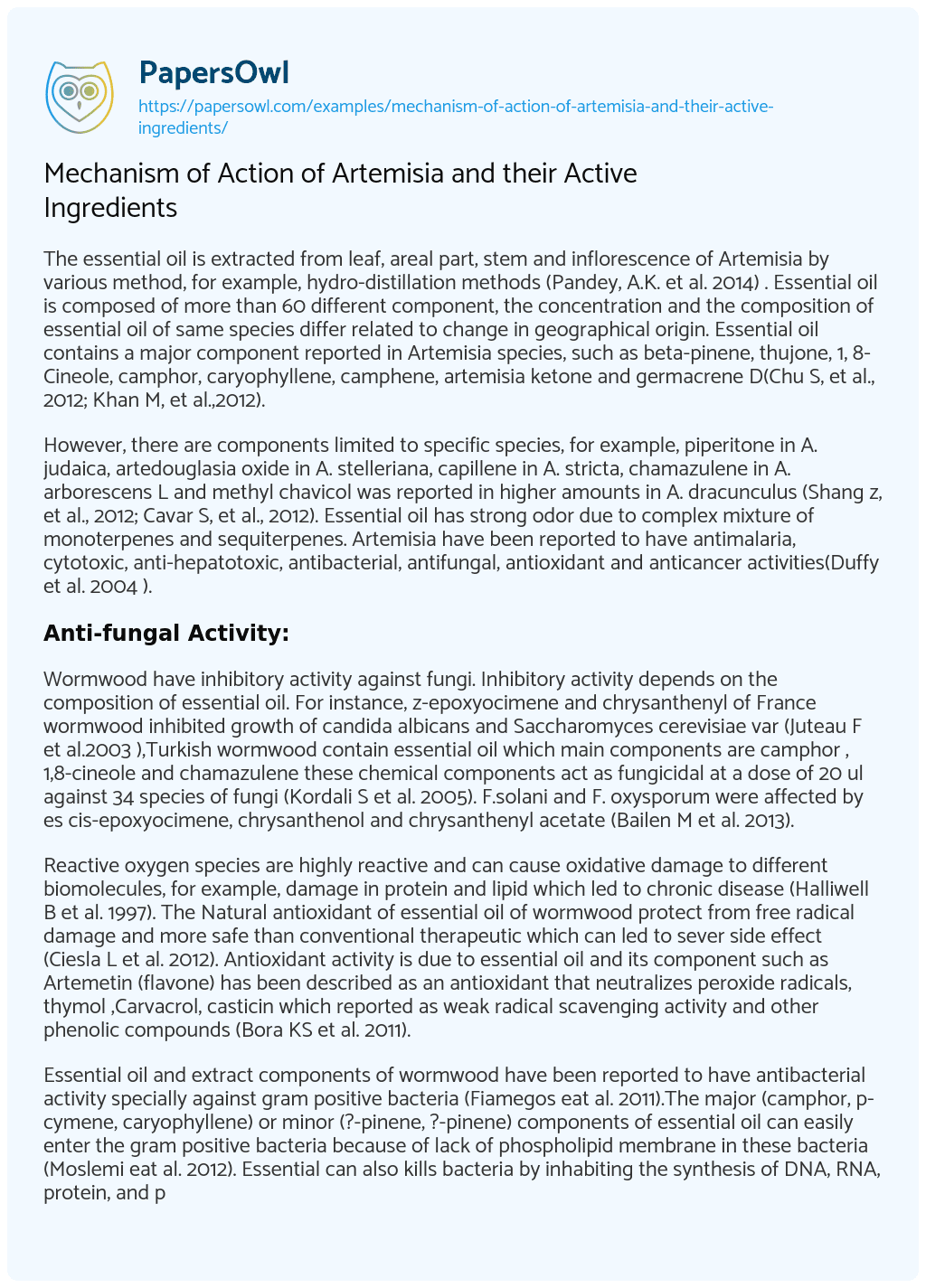 However, there are components limited to specific species, for example, piperitone in A. judaica, artedouglasia oxide in A. stelleriana, capillene in A. stricta, chamazulene in A. arborescens L and methyl chavicol was reported in higher amounts in A. dracunculus (Shang z, et al., 2012; Cavar S, et al., 2012). Essential oil has strong odor due to complex mixture of monoterpenes and sequiterpenes. Artemisia have been reported to have antimalaria, cytotoxic, anti-hepatotoxic, antibacterial, antifungal, antioxidant and anticancer activities(Duffy et al. 2004 ).

Reactive oxygen species are highly reactive and can cause oxidative damage to different biomolecules, for example, damage in protein and lipid which led to chronic disease (Halliwell B et al. 1997). The Natural antioxidant of essential oil of wormwood protect from free radical damage and more safe than conventional therapeutic which can led to sever side effect (Ciesla L et al. 2012). Antioxidant activity is due to essential oil and its component such as Artemetin (flavone) has been described as an antioxidant that neutralizes peroxide radicals, thymol ,Carvacrol, casticin which reported as weak radical scavenging activity and other phenolic compounds (Bora KS et al. 2011).

Essential oil and extract components of wormwood have been reported to have antibacterial activity specially against gram positive bacteria (Fiamegos eat al. 2011).The major (camphor, p-cymene, caryophyllene) or minor (?-pinene, ?-pinene) components of essential oil can easily enter the gram positive bacteria because of lack of phospholipid membrane in these bacteria (Moslemi eat al. 2012). Essential can also kills bacteria by inhabiting the synthesis of DNA, RNA, protein, and polysaccharide (Abad eat al. 2012).

Wormwood and its extracts considered as strong antioxidant and/or immune modulatory potential, and thus show hepatoprotective activity in the animal-based models. For instance, Furthermore, caffeoyl and dicaffeoylquinic acids are hepatoprotective in nature. Aqueous-methanolic extract of woodworm exhibited hepatoprotective effect specially against acetaminophen and CCl4 which induce hepatic damage (Gilani AUH eat all. 1995). The mechanism of action of woodworm in hepatic may be associated with inhibition of hepatic microsomal drug metabolizing enzymes, antioxidant activity, and/or blocking calcium channels (Mohammadian A eat al.2016;

Wormwood have been reported as antimalarial activity. For instance, the aqueous and alcoholic leaf extracts of woodworm showed antimalarial activity against a strain of Plasmodium berghei in mice (Zafar MM eat all. 1990). While the aqueous extract and sesquiterpene lactone fraction of woodworm has inhibited the growth of
P. falciparum which cause malaria in humans(Valdes AFC eat all. 2008) . The mechanism of action started by reacting with the heme groups of the haemoglobin molecules digested by parasites, altering the cell structure and its functions through the free radicles derived , which generated from iron and artemisinin reaction , thus affecting the growth and reproduction (Ferreira JFS eat all. 2008; Meshnick, S.R eat all. 1989).

The derivative of artemisinin has different effect depending on the tissue type so it causes strong cancer activity against leukemia and colon cancer , intermediate effect against melanoma , prostate, CNS and ovarian (Efferth, T. et al., 2001).The mechanism of artemisia against cancer cells started by cleavage of the endoperoxide bridge by the high iron concentration prescient in cancer cells which resulting in free radicals and subsequent oxidative damage such as iron depletion in the cells, damage to biomolecules, including proteins, DNA, RNA and lipids which causes Cancer cell death (Bustos . et al. 1994).

The mechanism of artemisia in malarial parasites and a cancer cells Similar but different in that the cancer cell sensitive to oxygen radicals because of a relative deficiency in antioxidant enzyme (Kelter, G. et al., 2007). Artemisinin also cause concurrently activity, inhibitory and attenuating multiple complementary cell signaling pathways (Hou, J.et al.,2008).

Metabolites of wormwood have been seen in a wide spectrum of localization such as mitochondria, ER, food vacuoles and other membrane systems. The mechanism of action could be towards any one or several of them ( Liu Y, et al., 2010; Wang J, et al., 2010; Eckstein-Ludwig U, et al., 2003).Wormwood generally unstable in the presence of alkaline or acidic conditions, and due to the presence of the peroxide which reactive with certain reducing agents including Fe2+, heme and Cu+. Endoperoxide bridge in wormwood conceder as a key to the anti-malarial and anti-cancer properties, endoperoxide bridge cleavage by high concentration of iron present in parasite and cancer cells resulting in free radical which cause cell damage ( Li J, et al., 2010; Krishna S, et al., 2004; Bustos, . et al., 1994).

Wormwood obstruct expression and function of specific nuclear receptors such as estrogen and androgen receptors which they are important in the antiproliferative activities. Wormwood also target genes involved in a wide range of normal and cancer cell functions, including cell proliferation, differentiation, cell survival and apoptosis (McEwan, I.J. 2009; Kerkhofs, S. et al., 2009). Wormwood and its derivatives have been shown to inhibit proliferation of humane cancer includes Brest cancer, because of Human breast cancer cells express relatively high ERa to ERb ratios, such as MCF-7 and T47D cells which they are highly sensitive to the antiproliferative effects of artemisinin-related compounds (Efferth, T., et al., 2002; Sundar, S.N. et al. 2008). Artemisinin act only on activity of Androgen receptor, which has been reported to be critical to the development of normal prostate tissue and to proliferation of neoplastic prostatic epithelium(Crawford, E.D. 2009 ).

Apoptosis also known as programmed cell death, these cells die and distract it’s self at particular points during the
development process (Horvitz, 1999). Apoptosis occurs normally during homeostatic mechanism to maintain cell populations in tissues and as a defense mechanism such as in immune reactions (Norbury and Hickson, 2001). Cells morphology are appears as a round or oval mass during apoptosis with dark eosinophilic cytoplasm and dense purple nuclear chromatin fragments.

Mechanism of Action of Artemisia and their Active Ingredients. (2021, May 03). Retrieved from https://papersowl.com/examples/mechanism-of-action-of-artemisia-and-their-active-ingredients/

Interactions between Magnetic Nanoparticles and a Static Magnetic Field