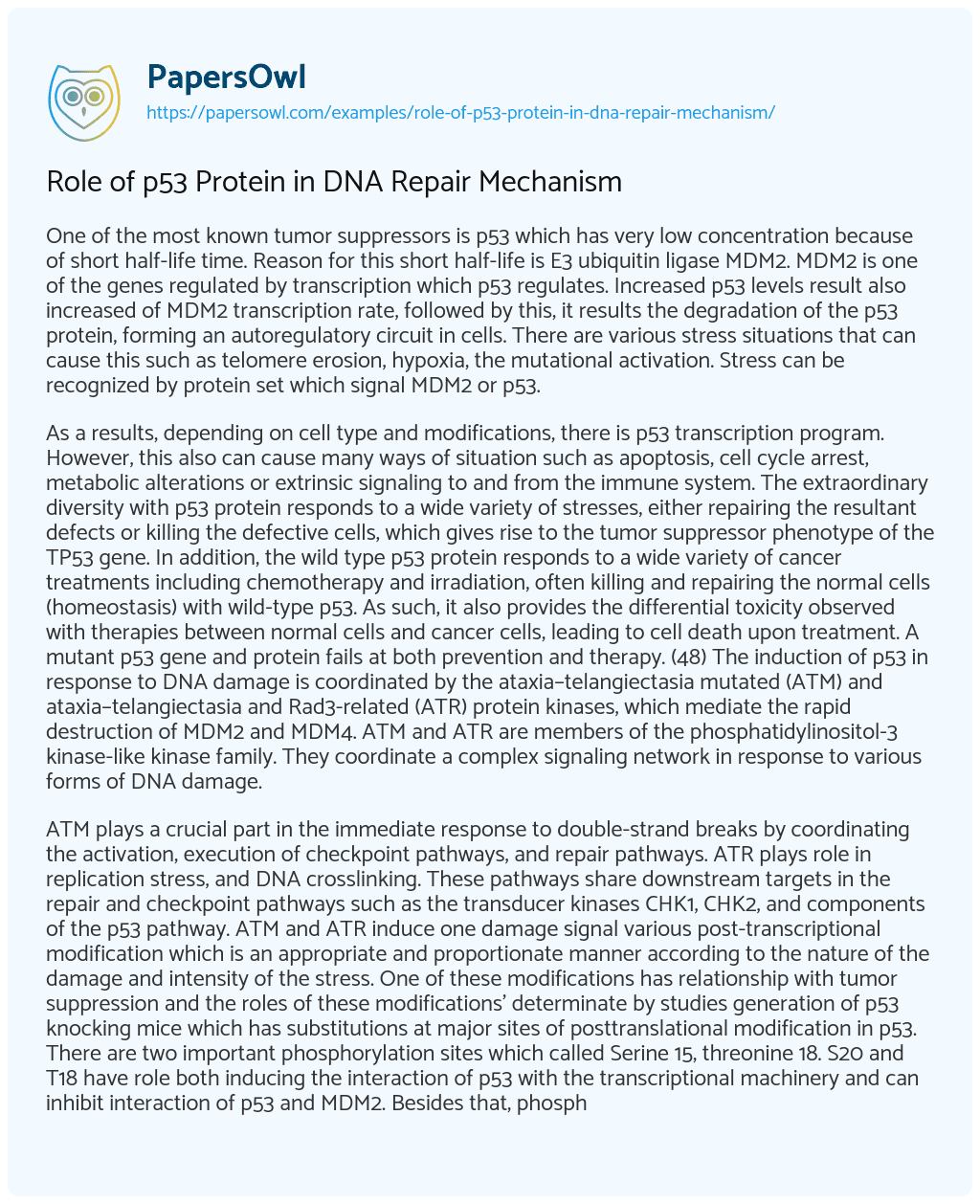 One of the most known tumor suppressors is p53 which has very low concentration because of short half-life time. Reason for this short half-life is E3 ubiquitin ligase MDM2. MDM2 is one of the genes regulated by transcription which p53 regulates. Increased p53 levels result also increased of MDM2 transcription rate, followed by this, it results the degradation of the p53 protein, forming an autoregulatory circuit in cells. There are various stress situations that can cause this such as telomere erosion, hypoxia, the mutational activation. Stress can be recognized by protein set which signal MDM2 or p53.

As a results, depending on cell type and modifications, there is p53 transcription program. However, this also can cause many ways of situation such as apoptosis, cell cycle arrest, metabolic alterations or extrinsic signaling to and from the immune system. The extraordinary diversity with p53 protein responds to a wide variety of stresses, either repairing the resultant defects or killing the defective cells, which gives rise to the tumor suppressor phenotype of the TP53 gene. In addition, the wild type p53 protein responds to a wide variety of cancer treatments including chemotherapy and irradiation, often killing and repairing the normal cells (homeostasis) with wild-type p53. As such, it also provides the differential toxicity observed with therapies between normal cells and cancer cells, leading to cell death upon treatment. A mutant p53 gene and protein fails at both prevention and therapy. (48) The induction of p53 in response to DNA damage is coordinated by the ataxia–telangiectasia mutated (ATM) and ataxia–telangiectasia and Rad3-related (ATR) protein kinases, which mediate the rapid destruction of MDM2 and MDM4. ATM and ATR are members of the phosphatidylinositol-3 kinase-like kinase family. They coordinate a complex signaling network in response to various forms of DNA damage.

ATM plays a crucial part in the immediate response to double-strand breaks by coordinating the activation, execution of checkpoint pathways, and repair pathways. ATR plays role in replication stress, and DNA crosslinking. These pathways share downstream targets in the repair and checkpoint pathways such as the transducer kinases CHK1, CHK2, and components of the p53 pathway. ATM and ATR induce one damage signal various post-transcriptional modification which is an appropriate and proportionate manner according to the nature of the damage and intensity of the stress. One of these modifications has relationship with tumor suppression and the roles of these modifications’ determinate by studies generation of p53 knocking mice which has substitutions at major sites of posttranslational modification in p53. There are two important phosphorylation sites which called Serine 15, threonine 18. S20 and T18 have role both inducing the interaction of p53 with the transcriptional machinery and can inhibit interaction of p53 and MDM2. Besides that, phosphorylation of p53 might has role of p53 induction and this important for determination of developing tumor cells. (49) 1.4. P53 and radiation In case of radiation, p53 is main regulator in DNA repair mechanism and doing so by promoting protein translation and inhibition of protein degradation. After damage in nucleus, there will be accumulation of p53. As a result of signaling pathway activation, apoptosis can be induced which also takes to cell to replication arrest. Therefore, p53 plays a crucial role in controlling cellular fate after irradiation.

For example, activation of p53 results in dramatically increased pre-mitotic apoptosis in tissues that have a rapid turnover rate such as the hematopoietic system and the gastrointestinal epithelium. To the contrary, in tissues with a slower turnover rate, such as the myocardium, accumulation of p53 following radiation does not cause a significant increase in pre-mitotic apoptosis. Instead of that, it induces genes that control cell-cycle checkpoints such as the cyclin-dependent kinase inhibitor p21. (50) In this thesis, searching for role of p53 lymphoma cancer cells were used. B-cell lymphomas which are belongs to Hodgkin’s lymphomas and most non-Hodgkin lymphomas, and they are “blood cancers” in the lymph nodes and they occurred frequently in older adults. Following this, our main aim is investigation of DNA repair kinetics using ?H2AX detection which shows DSBs after irradiation in wild type and mutant p53 lymphoma cell lines.