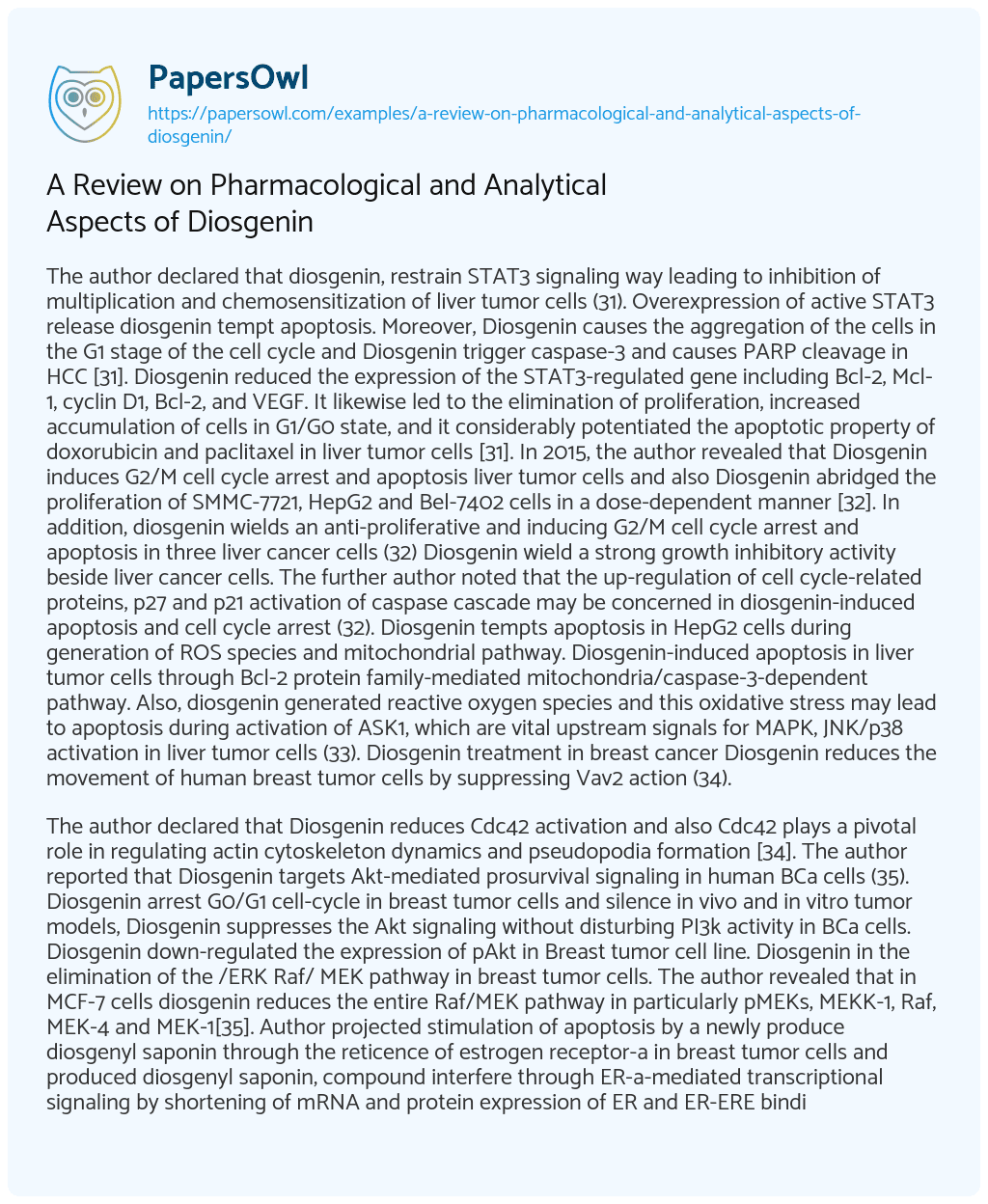 The author declared that diosgenin, restrain STAT3 signaling way leading to inhibition of multiplication and chemosensitization of liver tumor cells (31). Overexpression of active STAT3 release diosgenin tempt apoptosis. Moreover, Diosgenin causes the aggregation of the cells in the G1 stage of the cell cycle and Diosgenin trigger caspase-3 and causes PARP cleavage in HCC [31]. Diosgenin reduced the expression of the STAT3-regulated gene including Bcl-2, Mcl-1, cyclin D1, Bcl-2, and VEGF. It likewise led to the elimination of proliferation, increased accumulation of cells in G1/G0 state, and it considerably potentiated the apoptotic property of doxorubicin and paclitaxel in liver tumor cells [31]. In 2015, the author revealed that Diosgenin induces G2/M cell cycle arrest and apoptosis liver tumor cells and also Diosgenin abridged the proliferation of SMMC-7721, HepG2 and Bel-7402 cells in a dose-dependent manner [32]. In addition, diosgenin wields an anti-proliferative and inducing G2/M cell cycle arrest and apoptosis in three liver cancer cells (32) Diosgenin wield a strong growth inhibitory activity beside liver cancer cells. The further author noted that the up-regulation of cell cycle-related proteins, p27 and p21 activation of caspase cascade may be concerned in diosgenin-induced apoptosis and cell cycle arrest (32). Diosgenin tempts apoptosis in HepG2 cells during generation of ROS species and mitochondrial pathway. Diosgenin-induced apoptosis in liver tumor cells through Bcl-2 protein family-mediated mitochondria/caspase-3-dependent pathway. Also, diosgenin generated reactive oxygen species and this oxidative stress may lead to apoptosis during activation of ASK1, which are vital upstream signals for MAPK, JNK/p38 activation in liver tumor cells (33). Diosgenin treatment in breast cancer Diosgenin reduces the movement of human breast tumor cells by suppressing Vav2 action (34).

The author declared that Diosgenin reduces Cdc42 activation and also Cdc42 plays a pivotal role in regulating actin cytoskeleton dynamics and pseudopodia formation [34]. The author reported that Diosgenin targets Akt-mediated prosurvival signaling in human BCa cells (35). Diosgenin arrest G0/G1 cell-cycle in breast tumor cells and silence in vivo and in vitro tumor models, Diosgenin suppresses the Akt signaling without disturbing PI3k activity in BCa cells. Diosgenin down-regulated the expression of pAkt in Breast tumor cell line. Diosgenin in the elimination of the /ERK Raf/ MEK pathway in breast tumor cells. The author revealed that in MCF-7 cells diosgenin reduces the entire Raf/MEK pathway in particularly pMEKs, MEKK-1, Raf, MEK-4 and MEK-1[35]. Author projected stimulation of apoptosis by a newly produce diosgenyl saponin through the reticence of estrogen receptor-a in breast tumor cells and produced diosgenyl saponin, compound interfere through ER-a-mediated transcriptional signaling by shortening of mRNA and protein expression of ER and ER-ERE binding force, Moreover extracellular reduction of ER signaling reduce the Src/ MAPK pathway and induce apoptosis during the extrinsic system in ER-positive MCF-7 cells [36]. BCa stem-like cells are suppressed by diosgenin, a steroidal saponin, by the contraction of the wnt b-catenin signaling through the Wnt antagonist concealed frizzled-linked protein-4 [37]. The author reported that Diosgenin inhibits cancer stem cell-unique properties of mammosphere shape and ALDH CD44 expression and apoptotic cause of diosgenin is followed by down-regulation of drug effluxes, the diversion of the Wnt-b catenin pathway.

Author makes a deeper meaning into the mechanism of procedure of diosgenin at the molecular level and get the role of Wnt-b-catenin signaling which is consistent with the expression of stemness traits including self- transformation and drug resistance in the input traits of CSC causative to combativeness and invasion, such as the EMT and pro-invasive indicator, were abolished in diosgenin action in the cell model up-regulation Wnt antagonist [37]. The author proposed that over expression of fatty acid synthesis HER2 by inhibiting diosgenin in breast cancer cells via modulating Akt, JNK, and mTOR phosphorylation and Diosgenin preferentially repressed propagation and tempt apoptosis in the HER2-overexpressing tumor cell and also inhibited the phosphorylation of Akt/mTOR in diosgenin, and improved phosphorylation of JNK. Moreover, the author reported that diosgenin exploit of pharmacological inhibitors revealed that the modulation of Akt/mTOR and JNK phosphorylation was necessary for diosgenin-induced FAS repression [38].

A Review on Pharmacological and Analytical Aspects of Diosgenin. (2021, Mar 19). Retrieved from https://papersowl.com/examples/a-review-on-pharmacological-and-analytical-aspects-of-diosgenin/

Signal Transducer and Activators of Transcription