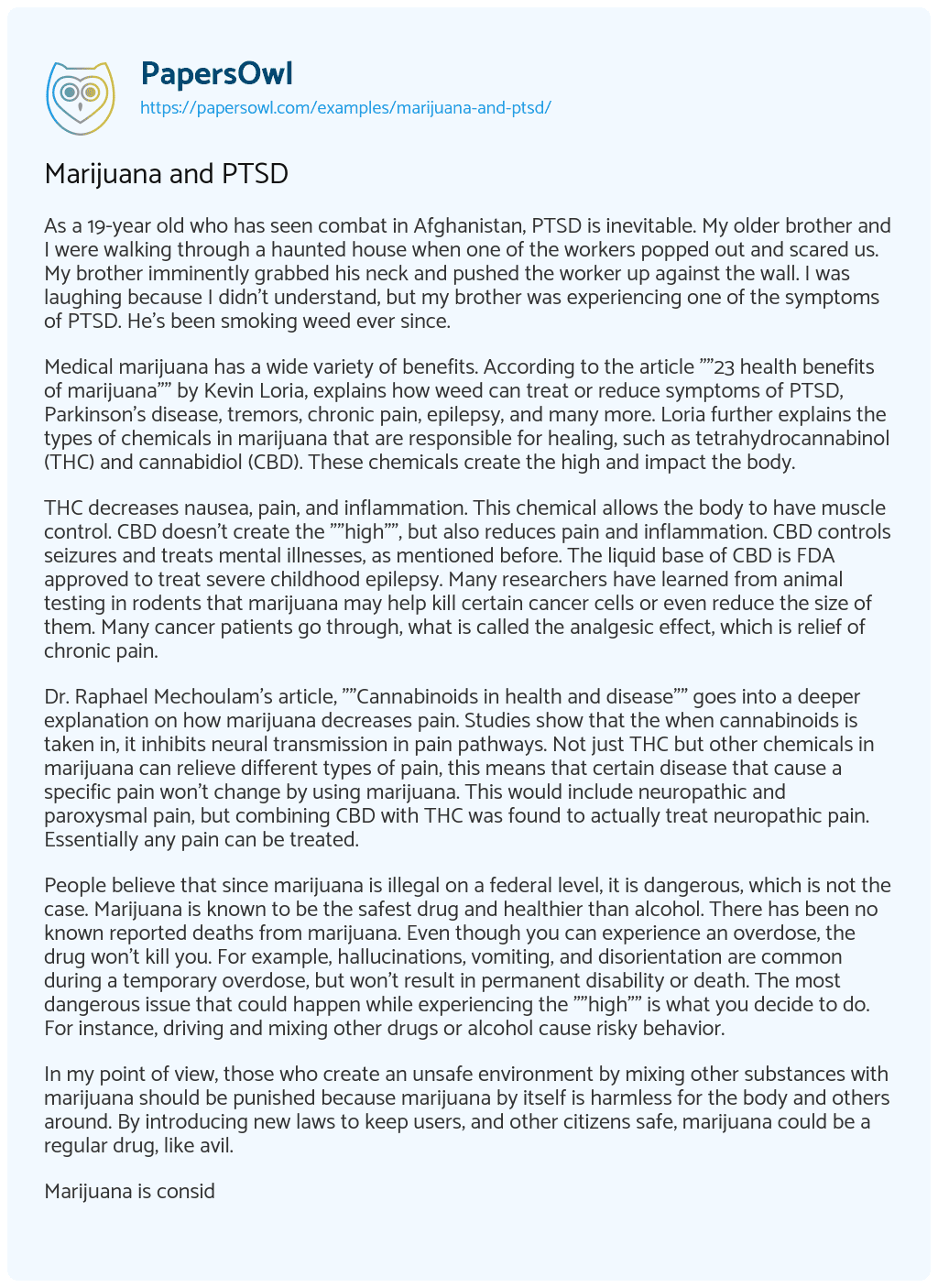 As a 19-year old who has seen combat in Afghanistan, PTSD is inevitable. My older brother and I were walking through a haunted house when one of the workers popped out and scared us. My brother imminently grabbed his neck and pushed the worker up against the wall. I was laughing because I didn’t understand, but my brother was experiencing one of the symptoms of PTSD. He’s been smoking weed ever since.

Medical marijuana has a wide variety of benefits. According to the article “”23 health benefits of marijuana”” by Kevin Loria, explains how weed can treat or reduce symptoms of PTSD, Parkinson’s disease, tremors, chronic pain, epilepsy, and many more. Loria further explains the types of chemicals in marijuana that are responsible for healing, such as tetrahydrocannabinol (THC) and cannabidiol (CBD). These chemicals create the high and impact the body.

THC decreases nausea, pain, and inflammation. This chemical allows the body to have muscle control. CBD doesn’t create the “”high””, but also reduces pain and inflammation. CBD controls seizures and treats mental illnesses, as mentioned before. The liquid base of CBD is FDA approved to treat severe childhood epilepsy. Many researchers have learned from animal testing in rodents that marijuana may help kill certain cancer cells or even reduce the size of them. Many cancer patients go through, what is called the analgesic effect, which is relief of chronic pain.

Dr. Raphael Mechoulam’s article, “”Cannabinoids in health and disease”” goes into a deeper explanation on how marijuana decreases pain. Studies show that the when cannabinoids is taken in, it inhibits neural transmission in pain pathways. Not just THC but other chemicals in marijuana can relieve different types of pain, this means that certain disease that cause a specific pain won’t change by using marijuana. This would include neuropathic and paroxysmal pain, but combining CBD with THC was found to actually treat neuropathic pain. Essentially any pain can be treated.

People believe that since marijuana is illegal on a federal level, it is dangerous, which is not the case. Marijuana is known to be the safest drug and healthier than alcohol. There has been no known reported deaths from marijuana. Even though you can experience an overdose, the drug won’t kill you. For example, hallucinations, vomiting, and disorientation are common during a temporary overdose, but won’t result in permanent disability or death. The most dangerous issue that could happen while experiencing the “”high”” is what you decide to do. For instance, driving and mixing other drugs or alcohol cause risky behavior.

In my point of view, those who create an unsafe environment by mixing other substances with marijuana should be punished because marijuana by itself is harmless for the body and others around. By introducing new laws to keep users, and other citizens safe, marijuana could be a regular drug, like avil.

Marijuana is considered a schedule 1 drug, putting cocaine and heroin in the same category. This means that the DEA believes marijuana is potential for abuse and doesn’t have medical value. To change the schedule for marijuana there would need to be multiple large-scale clinical trials. This could only happen if the federal government allowed the trials to take place. As you can see, this is a dilemma. Even though weed is federally illegal, many states have voted to make it legal. Recreational marijuana is legal in nine states, but medical marijuana has been legalized in 30 states.

In my opinion medical marijuana should be legal in all states and federally. I can understand how recreational marijuana could become an issue because of children and misusing the drug, but otherwise medical marijuana is beneficial for illnesses and other health problems.

Some readers, politicians, and even parents may challenge the view on marijuana addiction. After all, people have a strong belief that marijuana is the gateway drug. My argument that people seem to ignore is that one’s social environment is a crucial in one’s decision to try drugs. According to drug users, marijuana has a different high, not a strong as harder drugs. Marijuana does create a temptation and curiosity for other drugs, but its not the only factor. As for addiction, the NIH (National Institute on Drug Abuse) reports that marijuana use disorder is common for heavy users. This applies to those who smoke recreationally, not for health benefits. This disorder isn’t dangerous compared to alcohol, heroin, or cocaine addictions. It is easily treatable and could only be harmful in social aspects.

I have experienced the beneficial aspects of marijuana after living with my brother for three years when he completed his two tours. Marijuana has been tested to treat those in need. Why keep it out of the peoples hands?

Marijuana and PTSD. (2019, May 23). Retrieved from https://papersowl.com/examples/marijuana-and-ptsd/

Smoking Marijuana should be Legal or Illegal?

Why does People Consume Weed/Marijuana?