Medical Marijuana should be Legalized Throughout the US 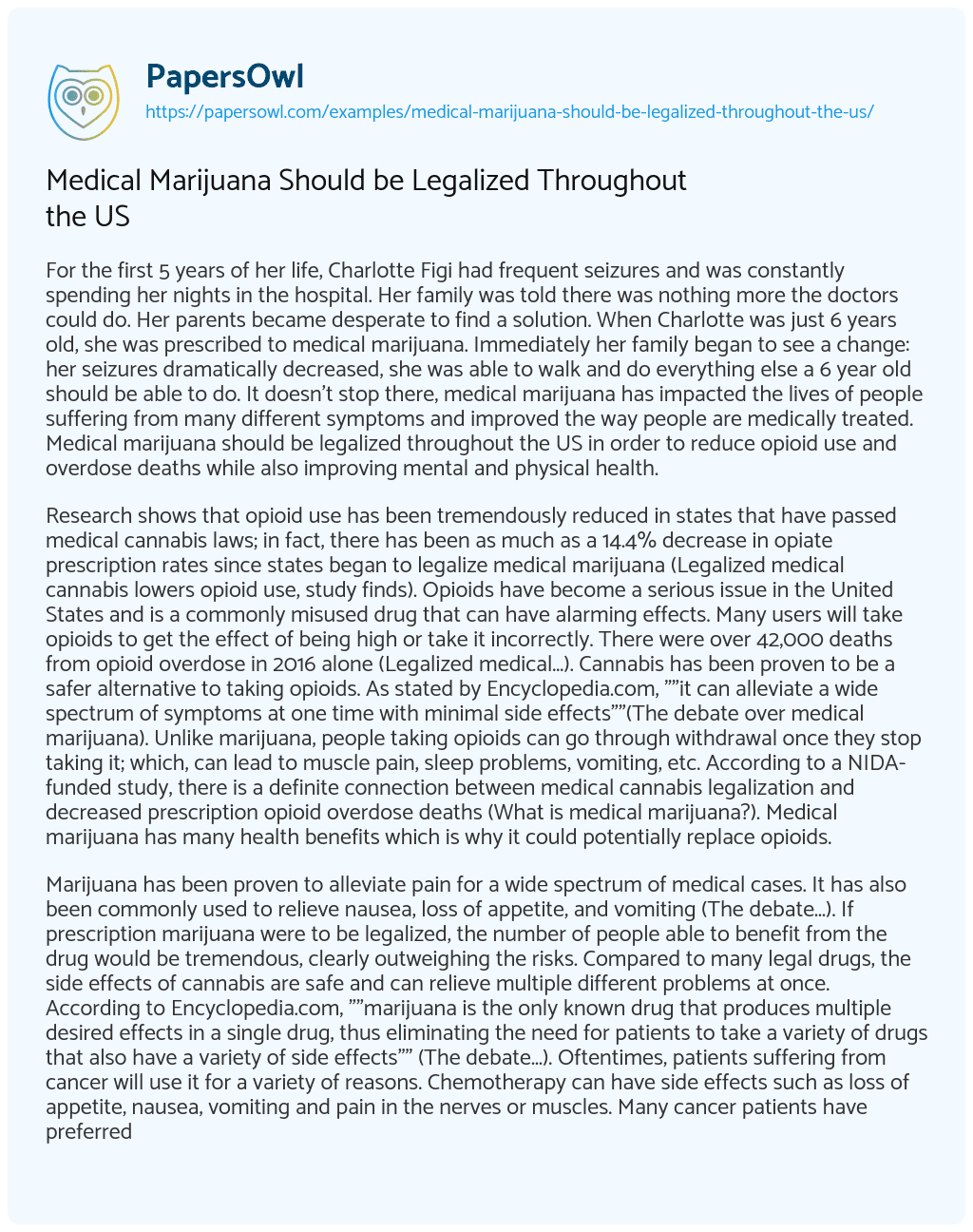 For the first 5 years of her life, Charlotte Figi had frequent seizures and was constantly spending her nights in the hospital. Her family was told there was nothing more the doctors could do. Her parents became desperate to find a solution. When Charlotte was just 6 years old, she was prescribed to medical marijuana. Immediately her family began to see a change: her seizures dramatically decreased, she was able to walk and do everything else a 6 year old should be able to do. It doesn’t stop there, medical marijuana has impacted the lives of people suffering from many different symptoms and improved the way people are medically treated. Medical marijuana should be legalized throughout the US in order to reduce opioid use and overdose deaths while also improving mental and physical health.

Research shows that opioid use has been tremendously reduced in states that have passed medical cannabis laws; in fact, there has been as much as a 14.4% decrease in opiate prescription rates since states began to legalize medical marijuana (Legalized medical cannabis lowers opioid use, study finds). Opioids have become a serious issue in the United States and is a commonly misused drug that can have alarming effects. Many users will take opioids to get the effect of being high or take it incorrectly. There were over 42,000 deaths from opioid overdose in 2016 alone (Legalized medical…). Cannabis has been proven to be a safer alternative to taking opioids. As stated by Encyclopedia.com, “”it can alleviate a wide spectrum of symptoms at one time with minimal side effects””(The debate over medical marijuana). Unlike marijuana, people taking opioids can go through withdrawal once they stop taking it; which, can lead to muscle pain, sleep problems, vomiting, etc. According to a NIDA-funded study, there is a definite connection between medical cannabis legalization and decreased prescription opioid overdose deaths (What is medical marijuana?). Medical marijuana has many health benefits which is why it could potentially replace opioids.

Marijuana has been proven to alleviate pain for a wide spectrum of medical cases. It has also been commonly used to relieve nausea, loss of appetite, and vomiting (The debate…). If prescription marijuana were to be legalized, the number of people able to benefit from the drug would be tremendous, clearly outweighing the risks. Compared to many legal drugs, the side effects of cannabis are safe and can relieve multiple different problems at once. According to Encyclopedia.com, “”marijuana is the only known drug that produces multiple desired effects in a single drug, thus eliminating the need for patients to take a variety of drugs that also have a variety of side effects”” (The debate…). Oftentimes, patients suffering from cancer will use it for a variety of reasons. Chemotherapy can have side effects such as loss of appetite, nausea, vomiting and pain in the nerves or muscles. Many cancer patients have preferred to use cannabis in order to alleviate these symptoms. Not only does it benefit cancer patients, but it also treats people with epilepsy. The CBD contained in marijuana is beneficial to controlling seizures. CBD International states, “”Patients who are suffering from epilepsy may gain a significant benefit from the use of cannabis to prevent and decrease the incidence of seizures”” (How does CBD help epileptic seizures). Medical cannabis not only has physical health benefits, but has many mental health benefits as well.

Another beneficial aspect of medical marijuana, is that it improves mental health. According to Christopher G. Fichtner, “”Patients use cannabis for symptoms of PTSD, anxiety disorders, depression, ADHD, bipolar disorder, chronic pain, insomnia, opiate dependence, and even schizophrenia”” (Fichtner). Anxiety is a very common disorder that often leads to depression and can affect someone’s whole outlook on life. Marijuana has been proven to relieve anxiety while also helping patients feel relaxed almost immediately after use. CBD International writes, “”Since THC is the most intense psychoactive part of cannabis, it can really aggravate anxiety in some people. But, because CBD balances THC, it makes individuals calm and gives them an all the more quieting and unwinding feeling.”” Anxiety medications currently being used have numerous short term and long term side effects; which, marijuana does not have making it the most practical option.

Although medical marijuana can be very effective, taking the drug can also have down sides; for example, if patients chose to smoke it, it can be harmful to the lungs. According to American Lung Association, “”Smoke from marijuana combustion has been shown to contain many of the same toxins, irritants and carcinogens as tobacco smoke”” (Marijuana and Lung Health). Smoking marijuana can have numerous short and long term side effects. Fortunately, doctors can prescribe safer ways to consume the drug. Forms such as, Hashish oil can be used instead of smoking. Hashish oil is known to have a strong effect with only using a small amount. Another form is marijuana-laced food, also known as edibles. Finally, users can use it on their skin through lotion or cream, still giving you the same effect but without causing damage to the lungs. As a result, smoking marijuana is not the only option and it can still be very beneficial without impeding your health.

It has been argued that marijuana poses a potential threat to your brain. Marijuana cannot affect your processing speed or behavior, but it is believed that is can affect your memory. According to a longitudinal study in New Zealand, marijuana is most likely to affect the memory of people who start taking it at a younger age as opposed to people who are older and matured (What are marijuana’s long term effects on the brain). National Institute on Drug Abuse writes, “”These results suggest that marijuana has its strongest long-term impact on young people whose brains are still busy building new connections and maturing in other ways.”” Although cannabis may affect memory, if it is only used for medical problems, the chances of it effecting someone long term is slim. According to Harvard Health Publishing, “”a small study from Harvard’s Marijuana Investigations for Neuroscientific Discovery (MIND) program looked at a group of people who used the drug to treat and manage anxiety, chronic pain, post-traumatic stress disorder, and sleep problems, and found that after three months of use, they did not show signs of declining cognitive function.”” For most cases, the alternative medications for marijuana have more or worse side effects, therefore making marijuana the best choice.

Overall, marijuana has many aspects beneficial to mental and physical health along with being able to replace harmful drugs such as opioids. With legalizing medical cannabis, it could eliminate the chances of drug overdoses in addition to helping people with epilepsy or cancer. It can relieve anxiety and improve the quality of life for many. As the world continues to find new ways to better our health care, people like Charlotte Figi can find alternative treatments to improve their health and way of life.

Medical Marijuana Should be Legalized Throughout the US. (2019, Dec 04). Retrieved from https://papersowl.com/examples/medical-marijuana-should-be-legalized-throughout-the-us/

The Truth Behind Medical Marijuana