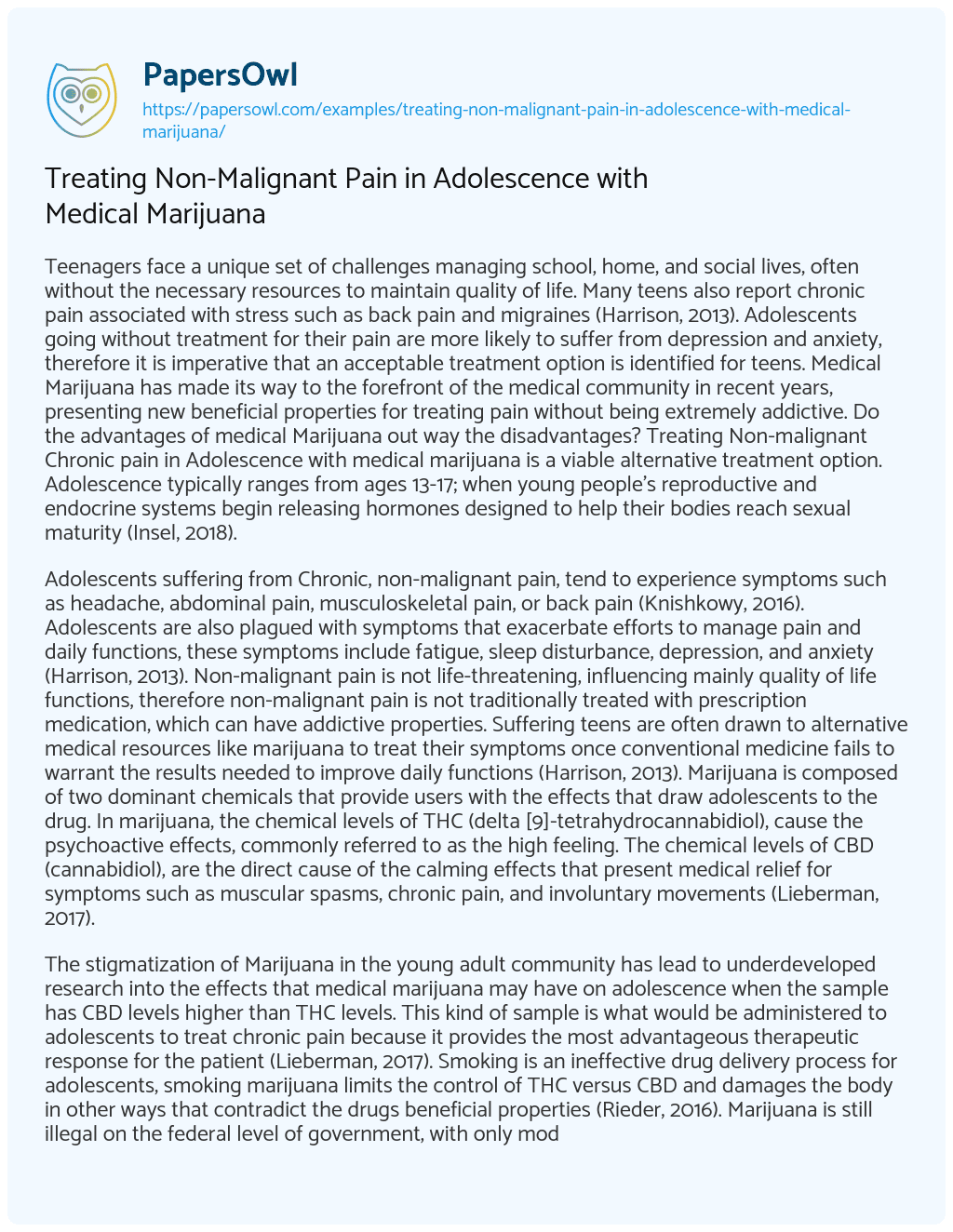 Teenagers face a unique set of challenges managing school, home, and social lives, often without the necessary resources to maintain quality of life. Many teens also report chronic pain associated with stress such as back pain and migraines (Harrison, 2013). Adolescents going without treatment for their pain are more likely to suffer from depression and anxiety, therefore it is imperative that an acceptable treatment option is identified for teens. Medical Marijuana has made its way to the forefront of the medical community in recent years, presenting new beneficial properties for treating pain without being extremely addictive. Do the advantages of medical Marijuana out way the disadvantages? Treating Non-malignant Chronic pain in Adolescence with medical marijuana is a viable alternative treatment option. Adolescence typically ranges from ages 13-17; when young people’s reproductive and endocrine systems begin releasing hormones designed to help their bodies reach sexual maturity (Insel, 2018).

Adolescents suffering from Chronic, non-malignant pain, tend to experience symptoms such as headache, abdominal pain, musculoskeletal pain, or back pain (Knishkowy, 2016). Adolescents are also plagued with symptoms that exacerbate efforts to manage pain and daily functions, these symptoms include fatigue, sleep disturbance, depression, and anxiety (Harrison, 2013). Non-malignant pain is not life-threatening, influencing mainly quality of life functions, therefore non-malignant pain is not traditionally treated with prescription medication, which can have addictive properties. Suffering teens are often drawn to alternative medical resources like marijuana to treat their symptoms once conventional medicine fails to warrant the results needed to improve daily functions (Harrison, 2013). Marijuana is composed of two dominant chemicals that provide users with the effects that draw adolescents to the drug. In marijuana, the chemical levels of THC (delta [9]-tetrahydrocannabidiol), cause the psychoactive effects, commonly referred to as the high feeling. The chemical levels of CBD (cannabidiol), are the direct cause of the calming effects that present medical relief for symptoms such as muscular spasms, chronic pain, and involuntary movements (Lieberman, 2017).

The stigmatization of Marijuana in the young adult community has lead to underdeveloped research into the effects that medical marijuana may have on adolescence when the sample has CBD levels higher than THC levels. This kind of sample is what would be administered to adolescents to treat chronic pain because it provides the most advantageous therapeutic response for the patient (Lieberman, 2017). Smoking is an ineffective drug delivery process for adolescents, smoking marijuana limits the control of THC versus CBD and damages the body in other ways that contradict the drugs beneficial properties (Rieder, 2016). Marijuana is still illegal on the federal level of government, with only moderated legalization in 28 states throughout the country, making accessibility for teens extremely limited (Lieberman, 2017). The National Drug Enforcement Agency has created an environment in which Marijuana is viewed as bad and unhealthy for teenagers, leaving them with more questions than answers about the drugs ability to help them manage pain. The American Medical Association fights strongly to advocate for medical marijuana as a misunderstood substance on the Federal level in Congress (Ryan and Hopko, 2017).

The Alliance for Cannabis Therapeutics offers incite for those who are interested in how they can seek treatment through cannabis products, as well as efforts that can be made in personal communities to advocate for medical marijuana. The advantages (positive effects) and disadvantages (negative effects) of marijuana can be analyzed through clinical research investigating how the bodies systems react to the substance being eaten, inhaled, or smoked. The number of legal medical cannabis patients under 18 years old ranges from 0.04% to 0.36% in the varying states with marijuana laws that allow for it to be administered for medical purposes (Knishkowy, 2016). The most commonly observed short-term side effects of medical marijuana are dry mouth, red eyes, tachycardia, nausea, weakness, and delayed motor skills (Knishkowy, 2016). Permanent use of medical marijuana in adolescents is not supported because the brain is still developing from ages 10-20 years of age; the long-term side effects of medical marijuana are also very detrimental to the body’s systems, which can form a dependence on the substance (Knishkowy, 2016). The positive effects of the drug are significant pain relief, and reduced number of seizures (Devinsky, 2016).

The author of “Is the Medical use of Cannabis a Therapeutic Option for Children?”, Rieder (2016) concluded thatthe adverse effects of medical marijuana should lead to a case by case analysis of the drugs efficacy for adolescents, no blanket diagnoses or treatments involving marijuana should be made when adolescents are the patients. Concluding that the use of medical marijuana is an option for adolescents, but that an investigation into the particular teens symptoms and circumstances needs to be conducted by healthcare professionals. The advantages of medical marijuana can out way the disadvantages if there is an extreme symptom, like chronic pain, that is making daily functions near impossible. There are severe long term and short term effects to frequent marijuana use, so professional moderation of the substance should be sought by teens who are afflicted with chronic pain. Smoking is not a viable option for the drug to be administered, it must be taken orally or through absorption.

The sample of Marijuana administered should have high CBD levels and low THC levels, this will promote health benefits and pain relief, rather than the high feeling that can cause recreational use. The extreme stigmatization around marijuana caused by the National Drug Enforcement agency has caused a lack of research and openness about teens using marijuana to relieve symptoms. To promote a healthier environment for teens to seek treatment, the medical community and the Federal government should recognize medical marijuana for its therapeutic properties and the substance should be legalized nationally. Treating Non-malignant Chronic pain in Adolescence with medical marijuana is a viable alternative treatment option.

Medical Marijuana should be Legalized Throughout the US